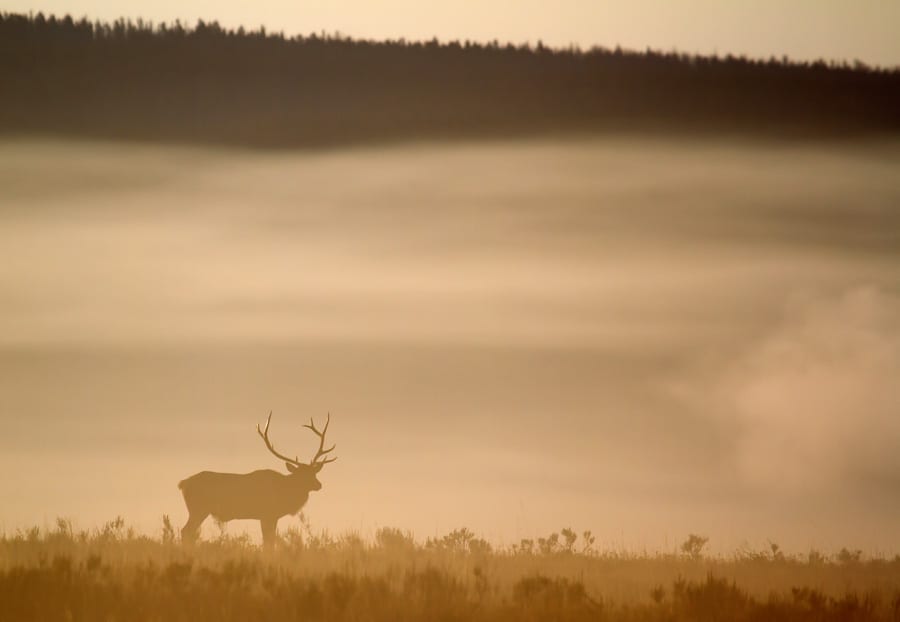 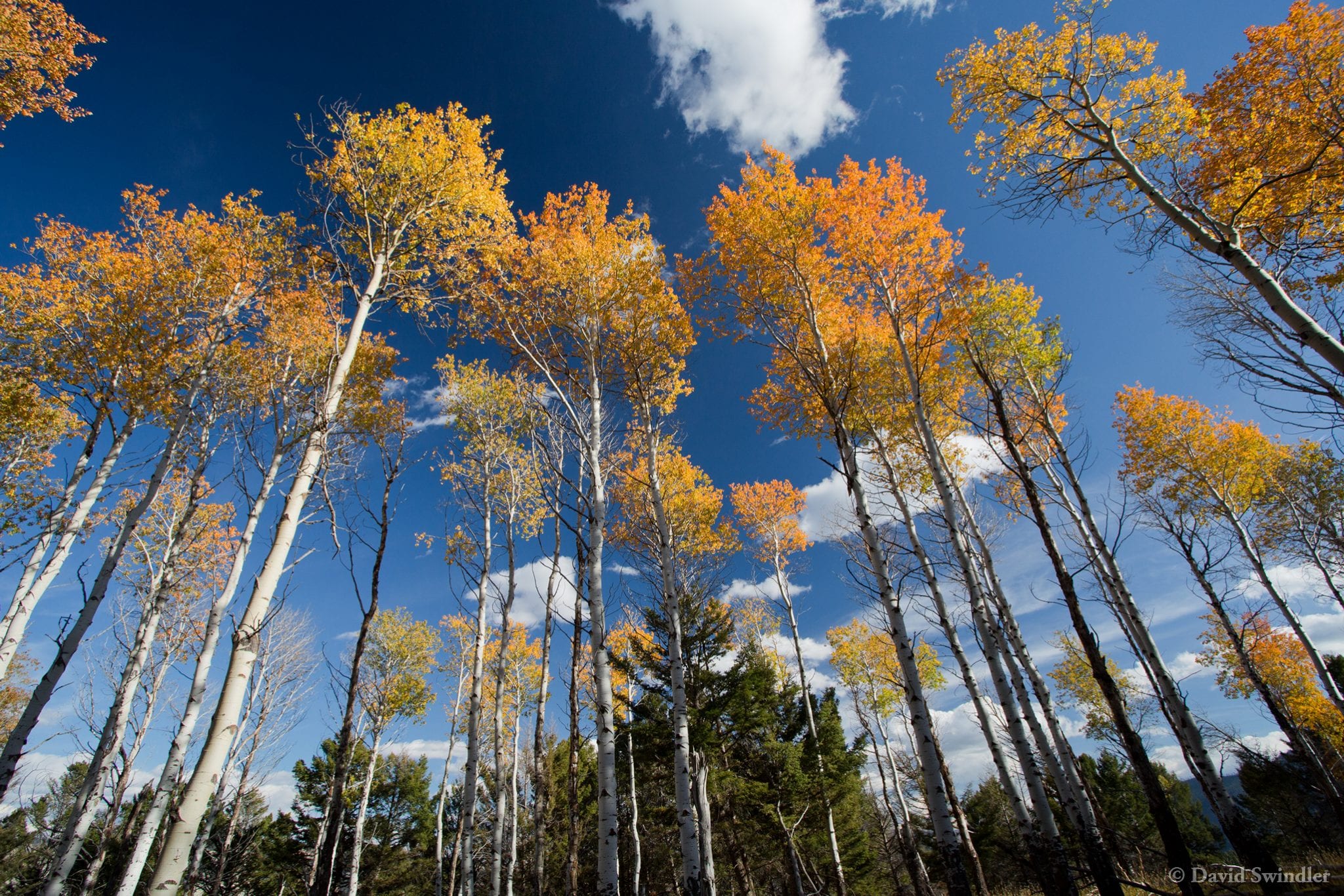 During first weekend of Oct. 2012, I went to Jackson, WY with the intent of photographing fall colors in the Tetons. Unfortunately, the color was lacking that year since it was so dry and the air was hazy from wildfire activity (mostly from my home state of Idaho). Thus, I decided to head North to Yellowstone for my weekend adventure. I was definitely glad I made that move as the photography was excellent!

Since I had limited time, I decided to hit a few spots I haven’t been before like Mammoth, the Grand Canyon of the Yellowstone, and Lamar Valley. Yellowstone NP isn’t known for copious autumn color, but if you look for it, it can be found. The shot on the left was taken near the town of Mammoth. I noticed some patches of Aspens on the mountains South of town. I hiked a ways up one of the trails and then ventured out cross country to the grove. Don’t forget your polarizer for these types of shots as they help accentuate the yellows and blues. 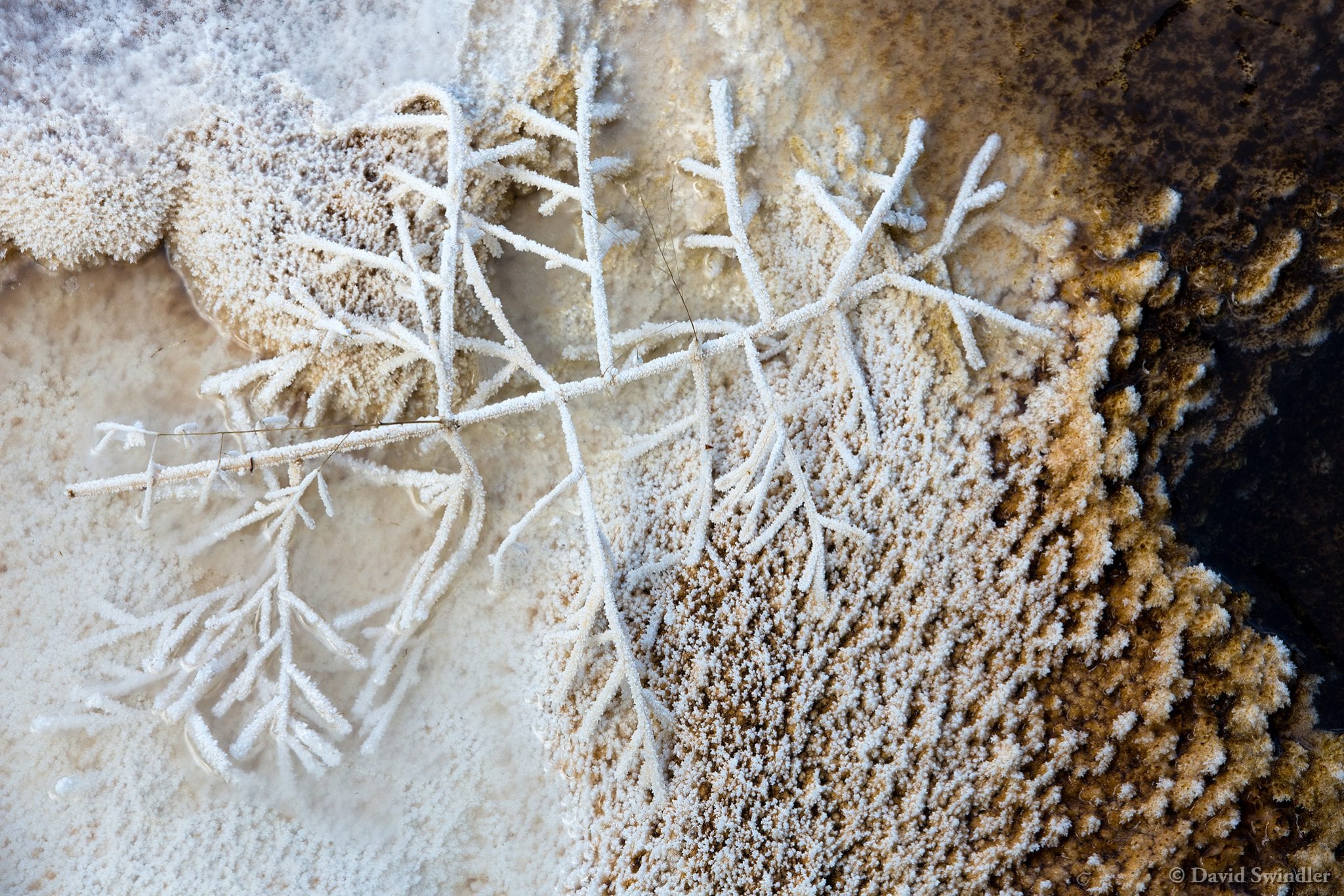 Around Mammoth, I took the standard type of shots you would expect. Despite the neat stair-stepped hot springs, this image on the right ended up being my favorite. Sometimes I get so caught up in the “wide-angle” view of a scene that I forget the little details. I’m glad to took the extra time to get this shot. Addition, there were lots of elk around Mammoth. I photographed many of them at very close range. 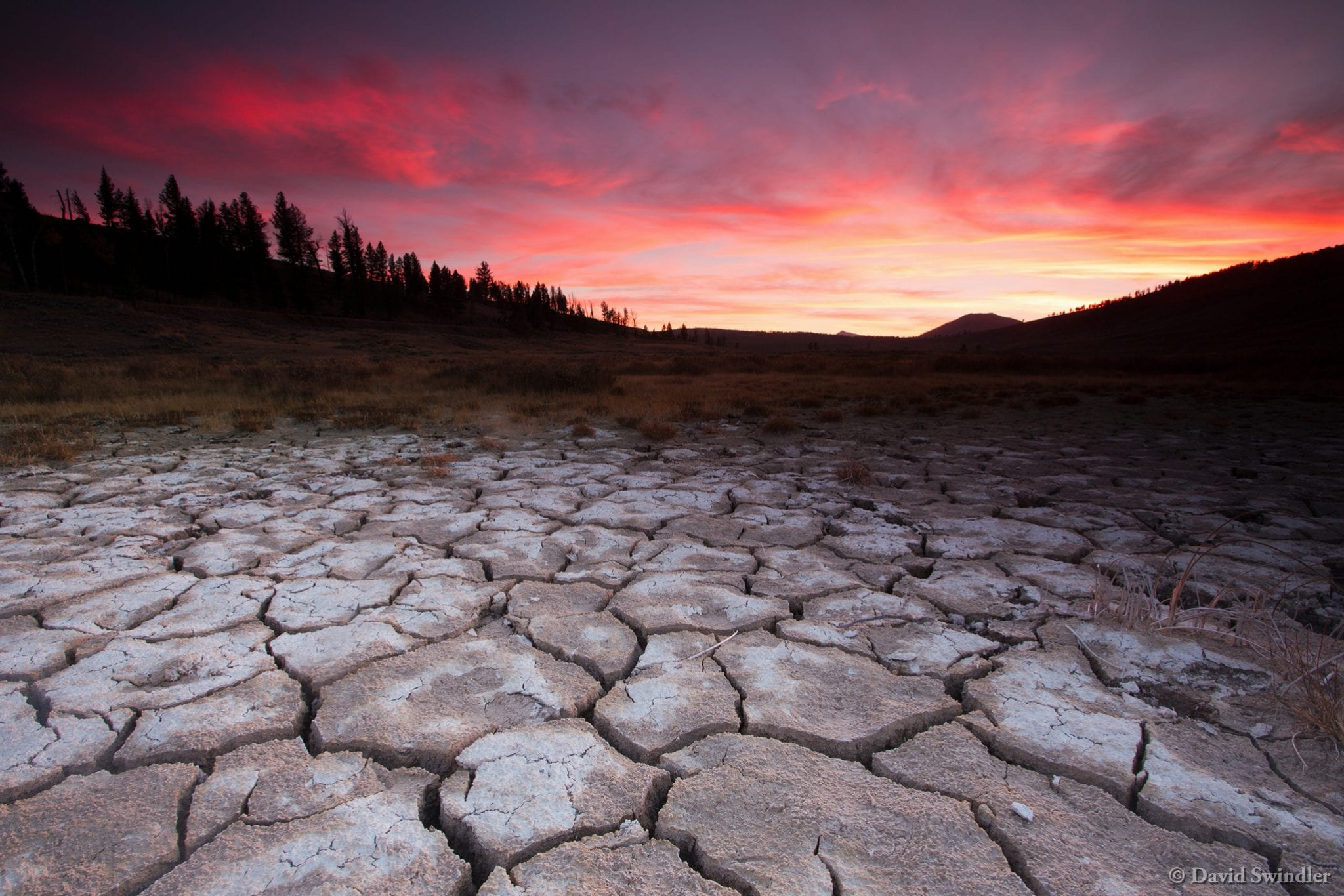 For sunset, I decided to head East from Mammoth. I made it as far as Blacktail Ponds and decided to wait for the light. Near the ponds was a semi-wet area with some nice cracked earth. I setup my tripod low to the ground took this shot with a couple handheld 2-stop GND filters. On my way back towards Mammoth, a black bear ran across the road in front of me, illuminated by the light of the full moon. What a great evening! 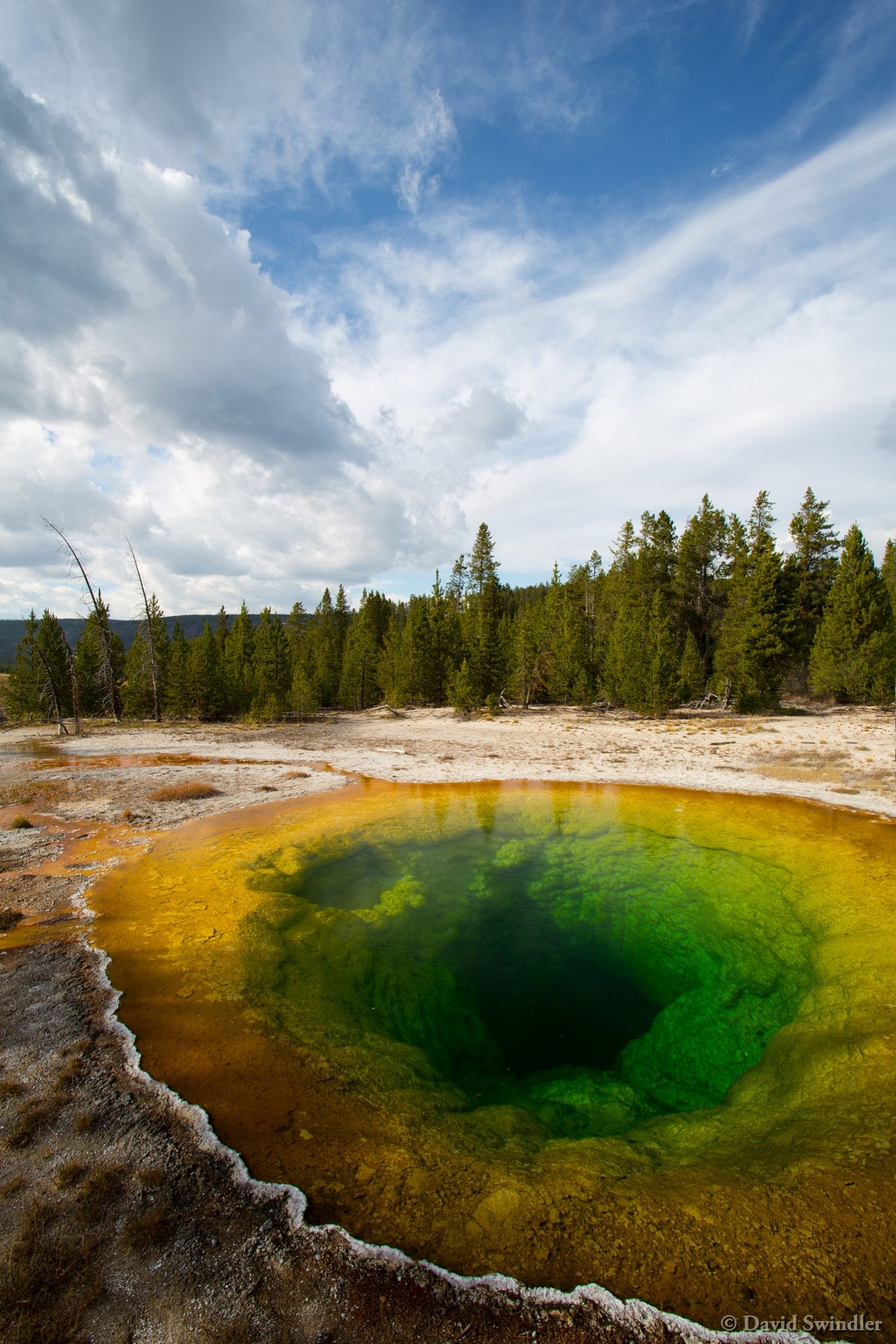 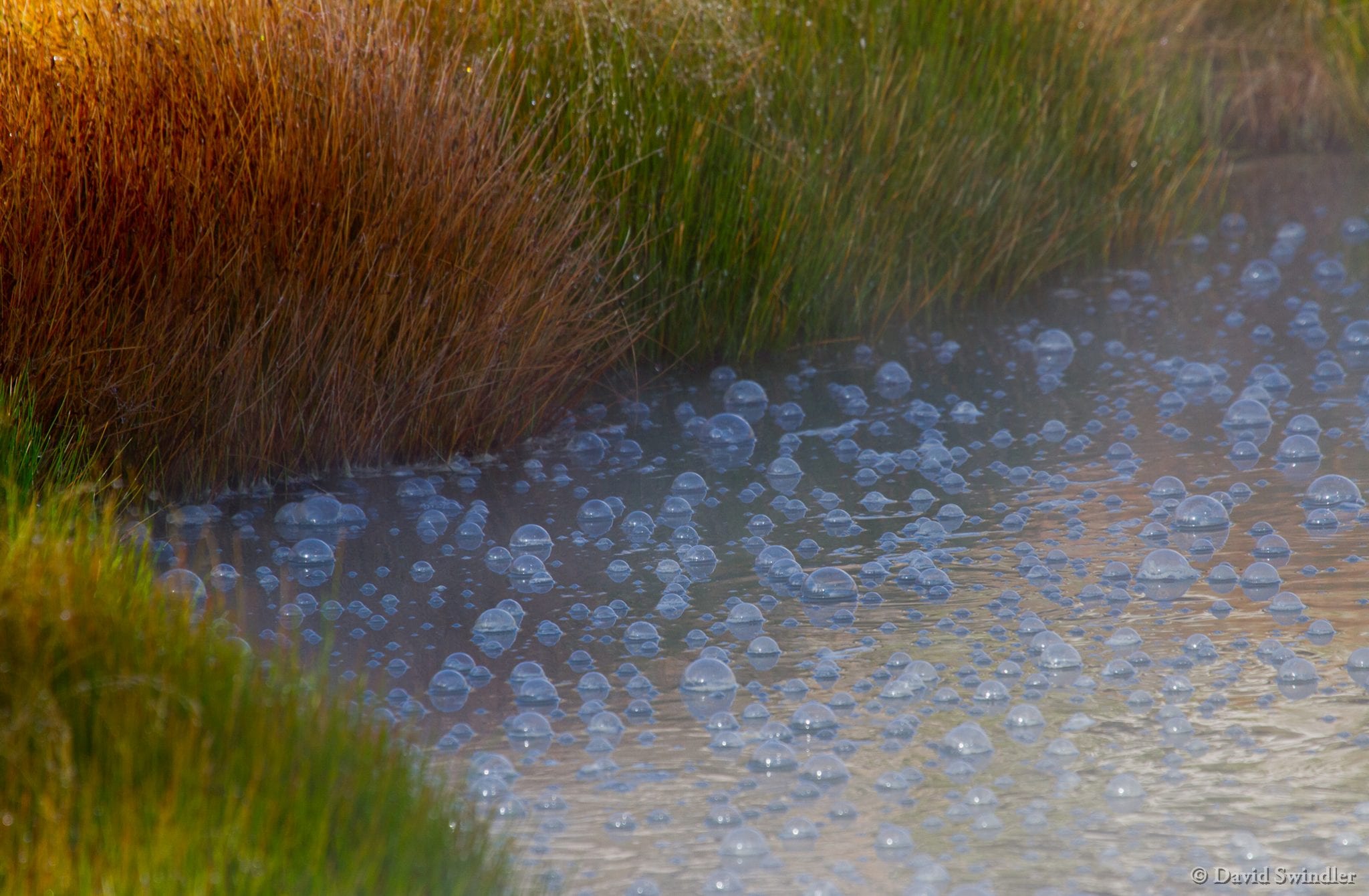 One nice thing about Yellowstone is that you can still take great photos in the middle of the day. On the left is a telephoto shot of a bubbling spring near Mud Volcano. The shot on the right is from Morning Glory Pool taken around noon. When nobody was looking, I had to jump the wooden fence in order to get this vantage point.

The next night I camped near the Grand Canyon of the Yellowstone. I checked out several different vantage points and decided I liked the view from the South Rim the best. I wasn’t too happy with the shots I got during sunset. 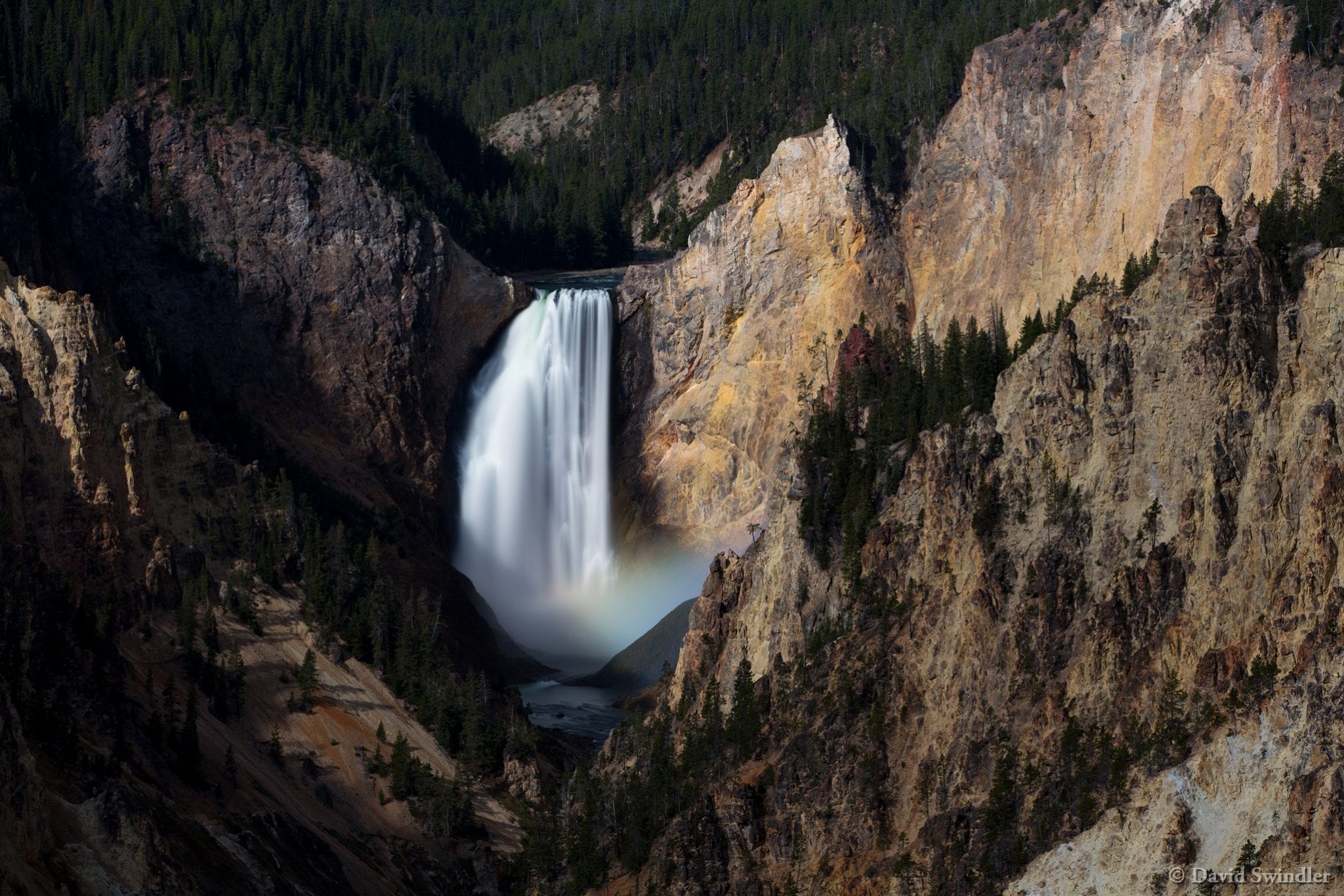 Later that night while eating dinner at my campsite, the full moon came up over the hills and lit up the night. I decided I would go back and shoot the waterfall in the moonlight. I used my 70-200mm lens and did a 4-min exposure at f/7.1. The resulting image had interesting shadows and contrast that made this image a winner. I even got a little rainbow at the base! 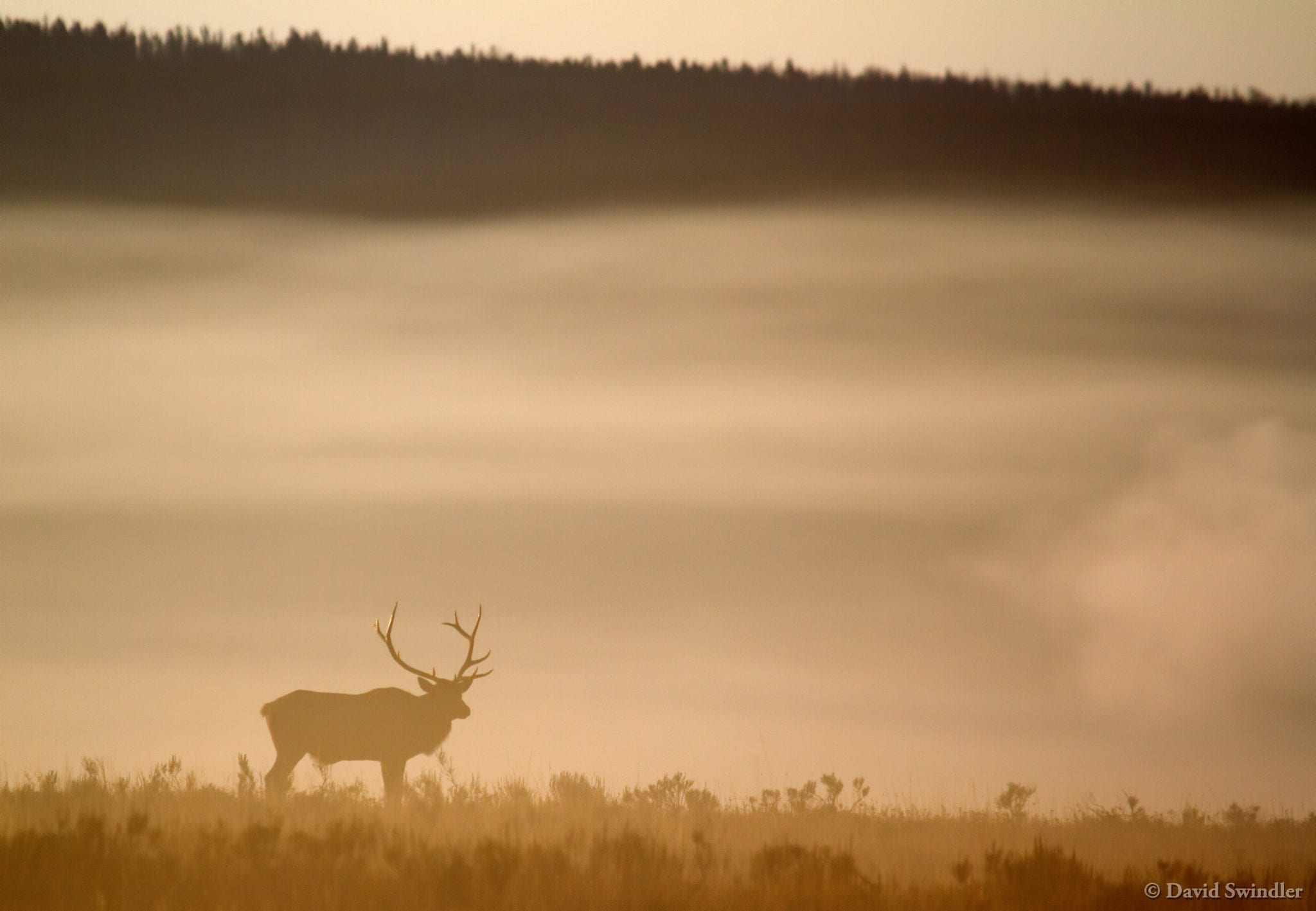 That night, I could hear elk bugling all around me. It was almost a surreal experience with the full moon. I woke up early the next morning and started climbing the nearby ridges. Soon enough I found a bull with a large harem. I spooked them at first and they ran over to the next ridge. I stayed in hot pursuit. The rising sun began to illuminate the morning fog as the bull graced the top of the ridge to see where I was at and I took this shot on the left. 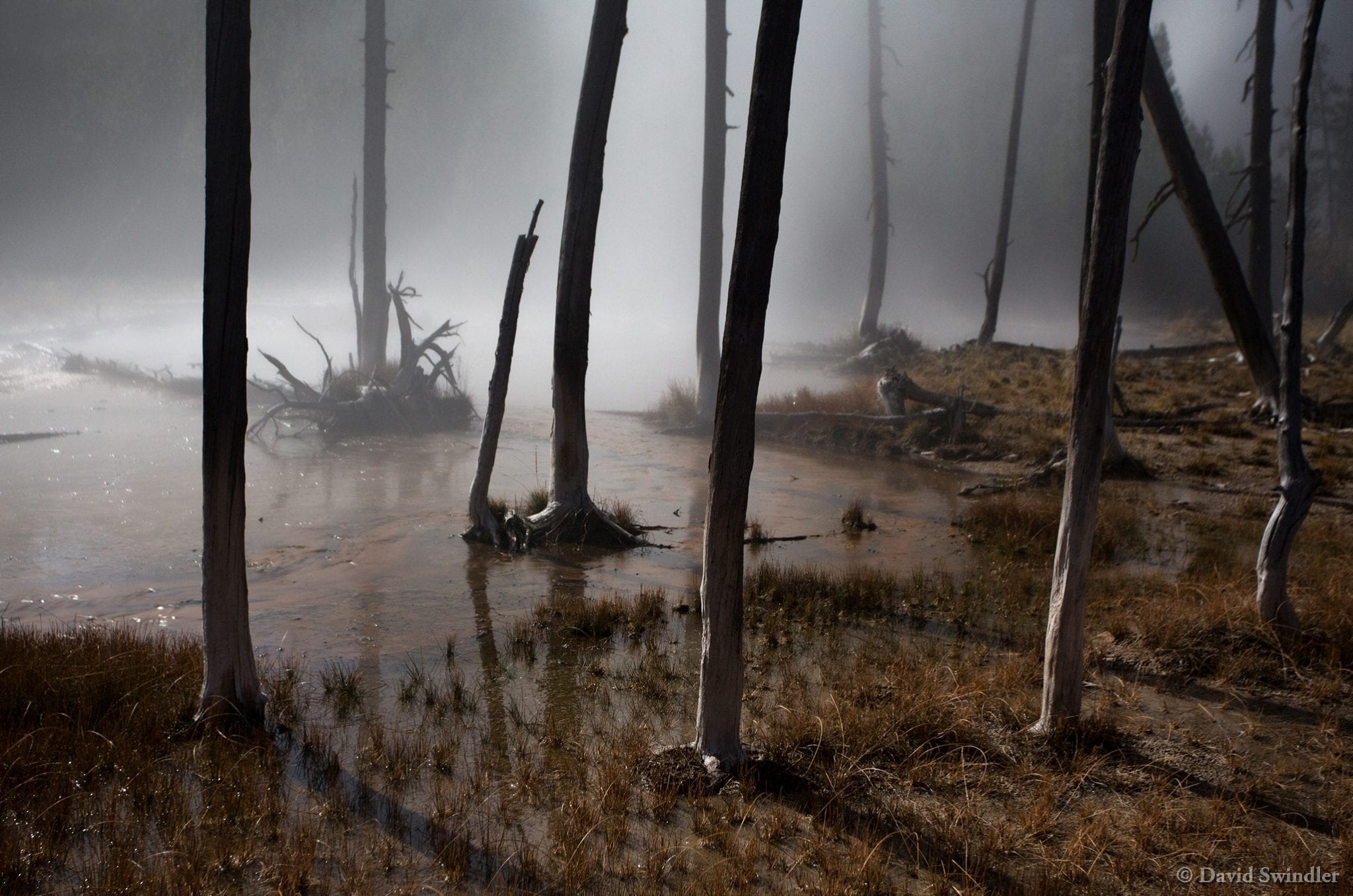 Since I had so much fun photographing in the moonlight the night before, I decided to try it again. This time I went to Artist’s Paint Pots and got some ghastly looking images of dead trees with night fog coming from the warm water. While taking these pictures, I could hear wolves howling in the distance. It was eerie to say the least! 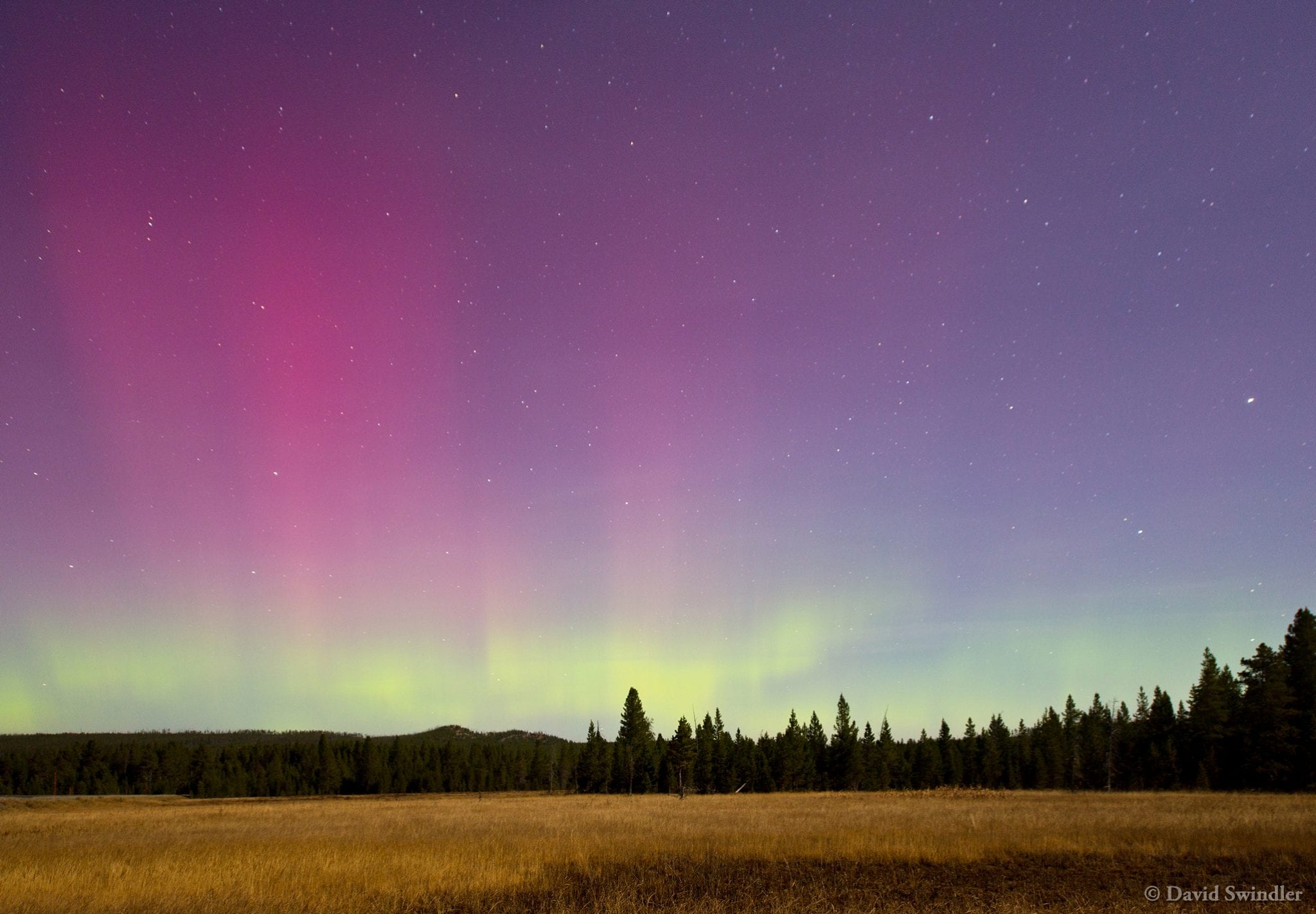 While hiking back to the car from Artist’s Paint Pots, I noticed some faint lights streaking up through the sky. At first I didn’t know what they were. Then it dawned on me they were the Northern Lights! I quickly made my way to Gibbons Meadow where I had a clearer view of the Northern sky. With the full moon, the lights weren’t very bright to the naked eye. However, when I took this shot with my Nikon 14-24mm lens @f/2.8 25sec ISO500, the color in the sky took my breath away. The moon provided the foreground light. The lights lasted for about 30mins but they kept getting more and more faint.

In conclusion, I highly recommend spending a few days in Yellowstone during the fall. Wildlife viewing is excellent (I even saw a grizzly bear), there aren’t as many people around, and if you’re lucky, you might get to see the aurora borealis! Just remember to pack warm clothes and bring a warm sleeping bag if you’re camping. Happy exploring!