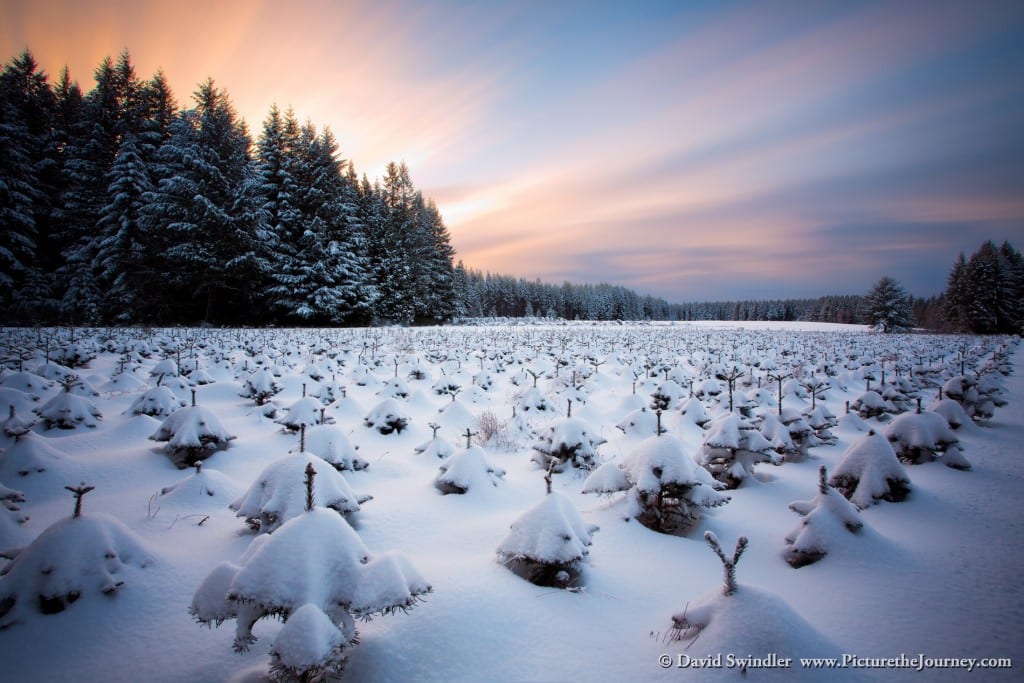 This February, I planned a trip out to the Oregon Coast. While there, a winter storm came in a couple days sooner than forecast. With the coast hemmed in by fog and snow, I decided to head inland to photograph some of Oregon’s iconic waterfalls. My deciding factor was a webcam I saw on my smartphone from Silver Falls State Park. It looked so beautiful with the fresh coat of snow; I couldn’t pass it up even though I knew the driving would be difficult. 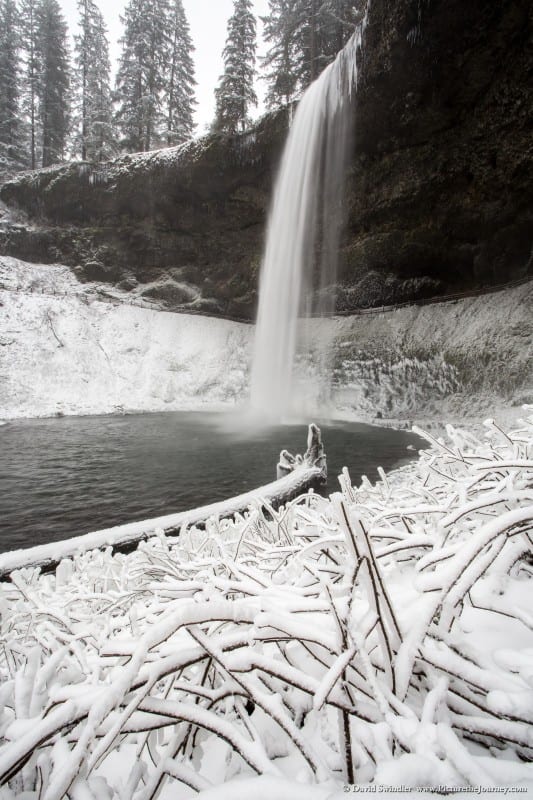 I made it up to South Falls by mid-afternoon. Just as the webcam had shown, the falls were stunning in the bright white snow. However, what caught my attention were the ice coated plants down near the base of the falls. I made my way down the steep hillside and found some compositions I liked. However, there was so much freezing mist coming off the falls, that my equipment quickly became ice-logged. Soon enough ice had built-up on my camera that I couldn’t even press the shutter button. The shot below of the frozen log was one of the last ones I got. My jacket was also a sheet of ice and my tripod no longer functional. At that point, I had no choice but to return to the car to thaw out my gear. 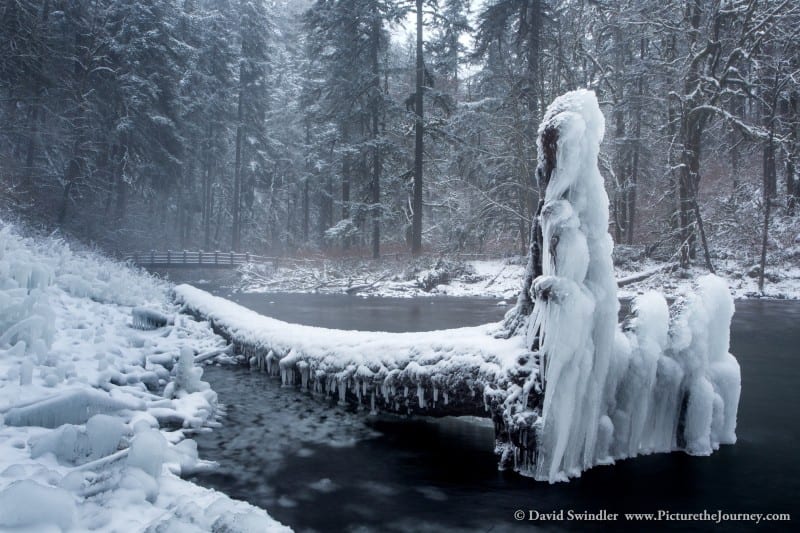 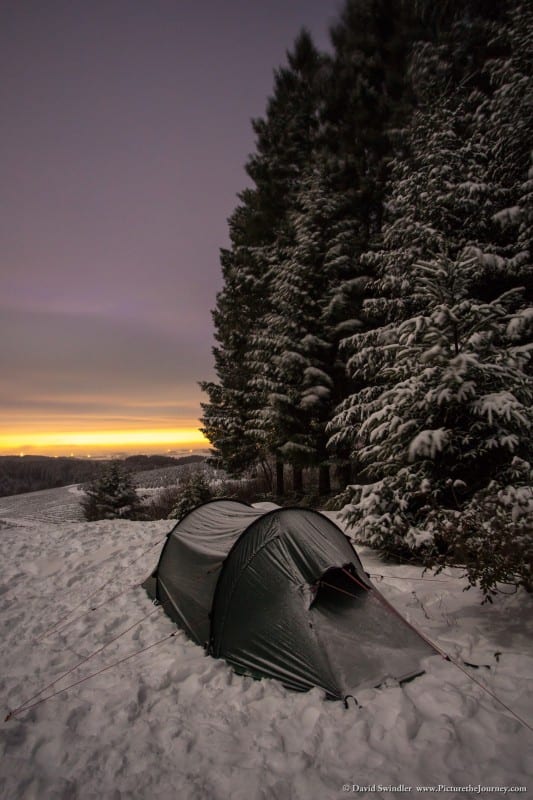 I spent the night up on the ridge overlooking the lights of Salem, Oregon. It was peaceful falling asleep to the falling snow. The next morning I woke up early and went back to South Falls. En route, I noticed some Christmas Tree Farms and figured they would be ideal for sunrise. Too bad I didn’t get any of these images before Christmas! I was also impressed with how well my car still managed on the snow covered roads (second shot below). 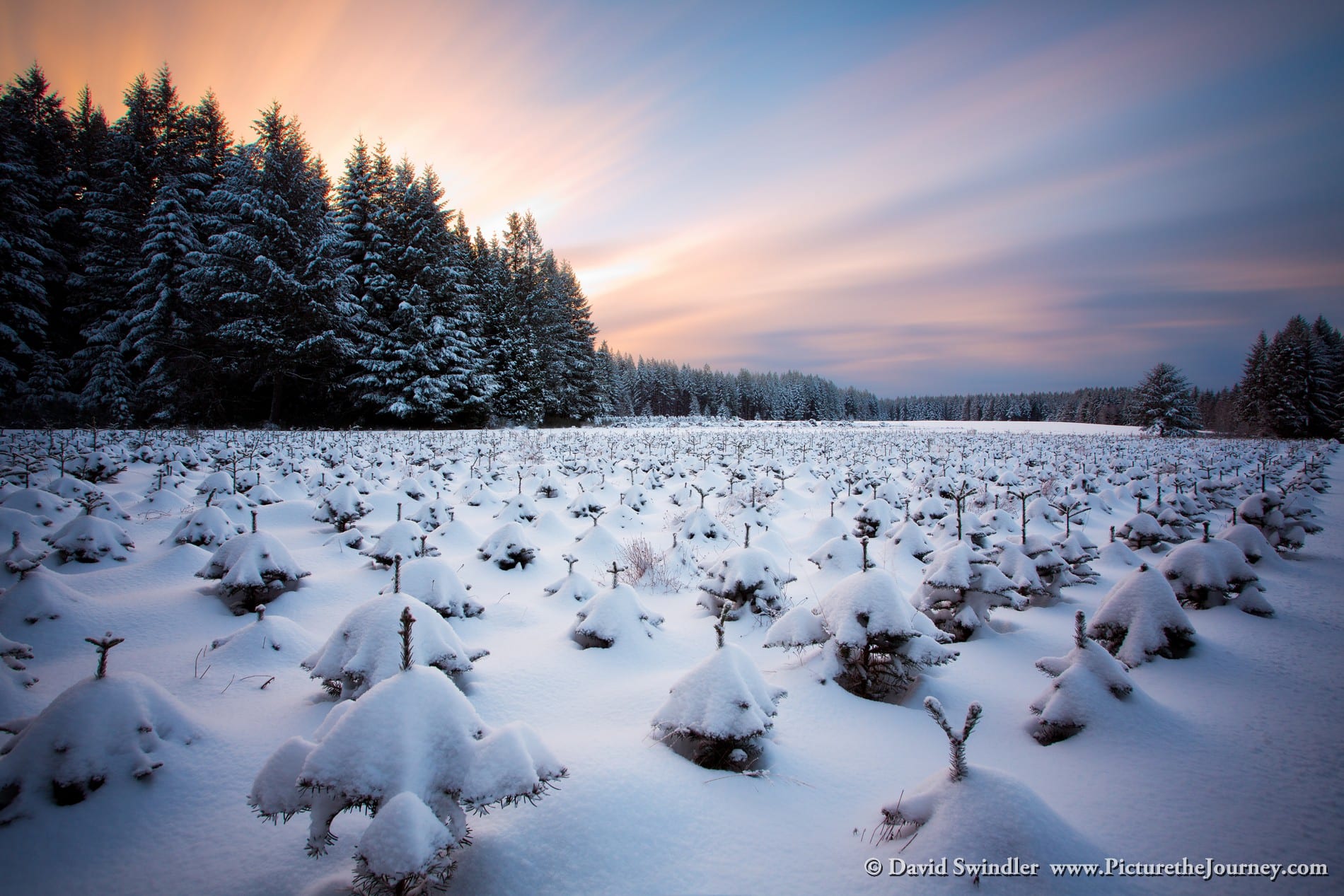 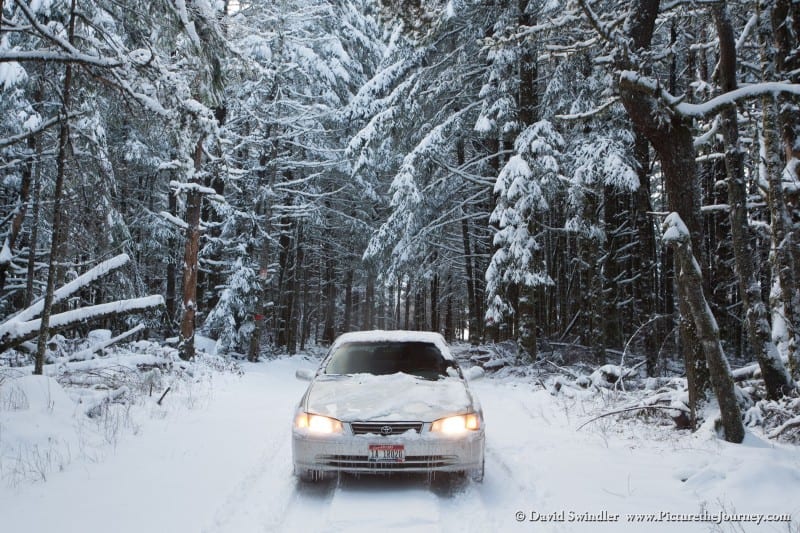 Arriving back at Silver Falls, I ran into fellow photographer Gary Weatherby. I follow him on Flickr and we had a good time talking photography and scouting compositions. The shot below was one I saw him working on and I also really liked. Having the foreground ice really added to the depth of the shot. 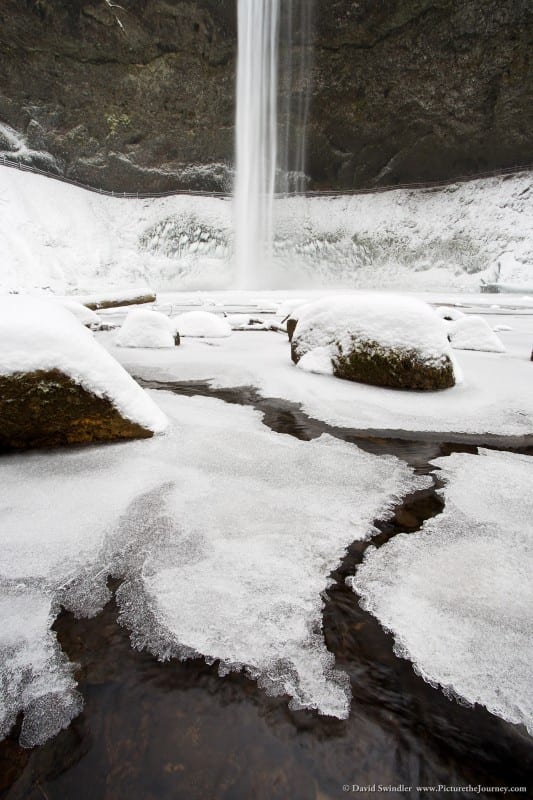 From there, I headed down the trail to Lower South Falls. The trail goes around behind the falls and there were lots of neat ice formations to see. However, I didn’t really learn my lesson from the night before, and soon my equipment was iced up and inoperable. So again, I had to return to the car to thaw things out. Next, I went out to North Falls. I found it fascinating how the cliff walls were coated with myriad hanging icicles, juxtaposed against tree branches and plants. 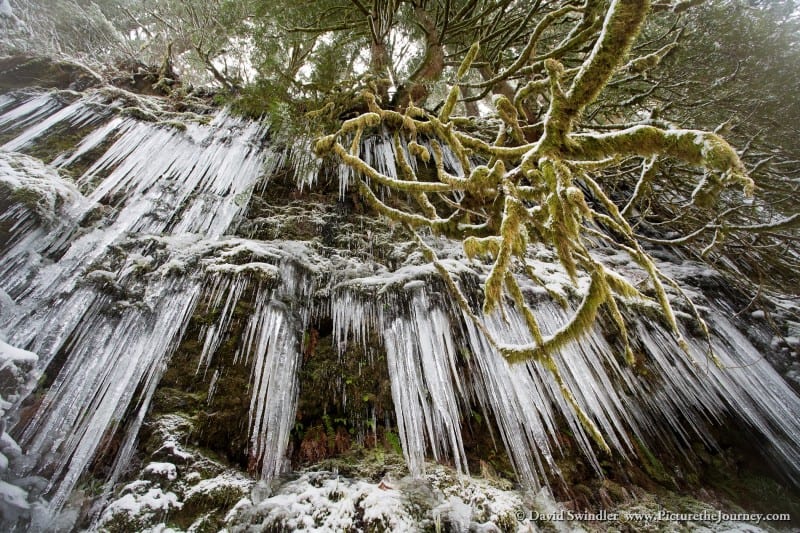 I thought the views of North Falls were nice and was able to get some angles with hanging icicles. In the second shot below, I scrambled down to a little alcove at the base of the falls. While I was there, another photographer came down there. He said he had seen my flash going off and wondered if I might need help. That was nice of him to check it out. While there, he liked the composition and stayed to shoot several frames of his own. 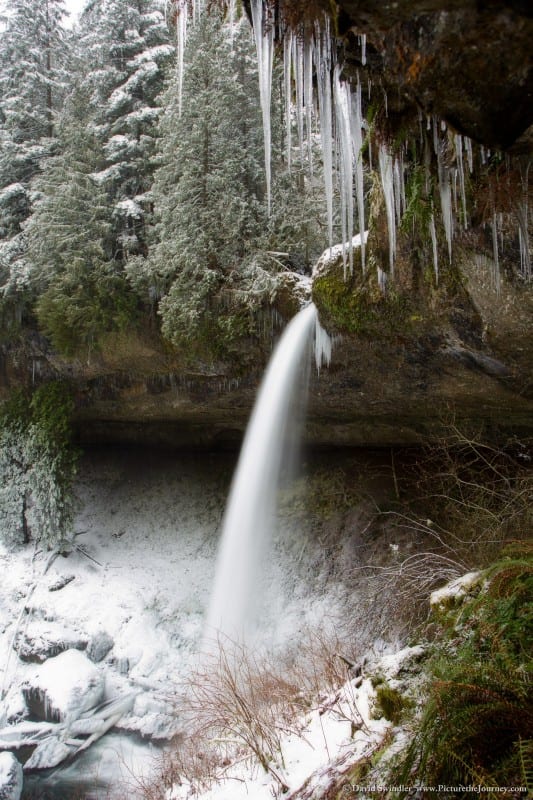 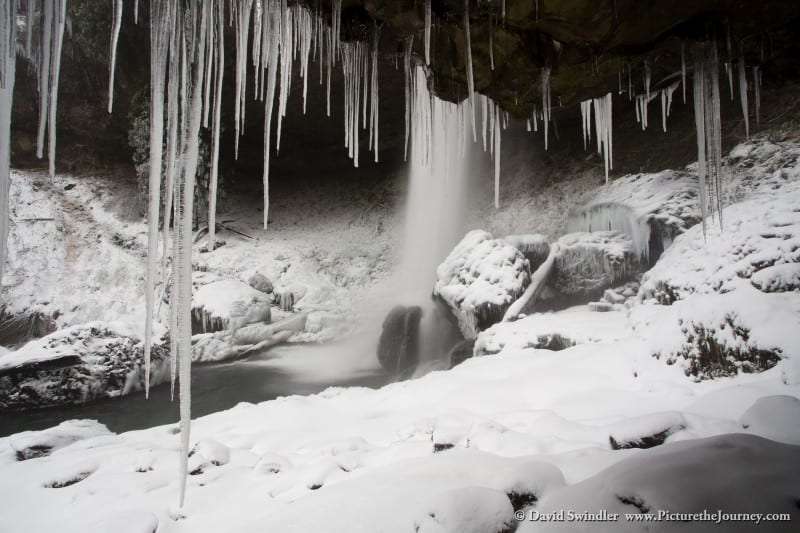 That night I drove out to Eagle Creek in the Columbia River Gorge. I arrived late and slept in one of the picnic shelters to avoid having to pitch my tent. The next morning I set out on the trail. Like North Falls, the entire canyon was covered in hanging icicles. It was so beautiful although pictures couldn’t really do it justice. I got to the Metlako Falls viewpoint but wasn’t happy with any of the angles I was getting. It’s pretty far back from the falls and the canyon obscures it quite a bit. I headed back up to the trail and bushwacked down the ridge to get a closer view. I had to be very careful since it was steep and slick. I found a relatively open spot at the edge of the rim. This is where my super tall tripod paid off. I was able to get the camera high enough to get a good perspective on the falls without the foreground plants getting in the way. 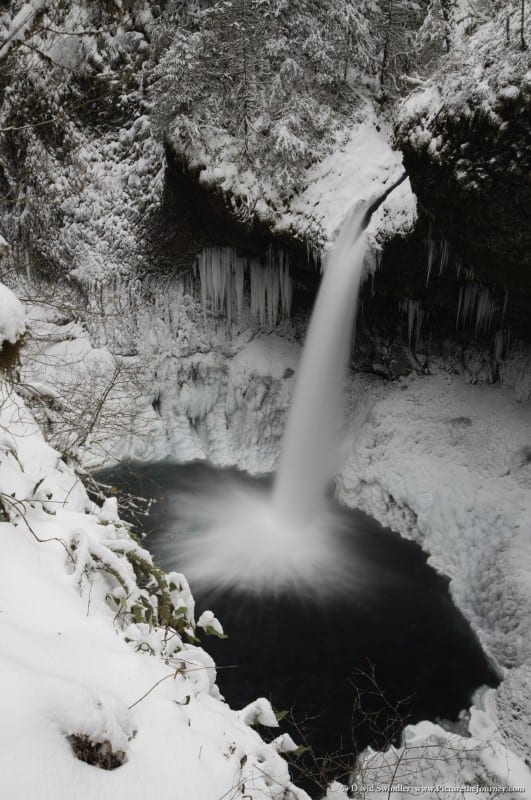 After Metlako, I went over to Punchbowl Falls. I figured the water level would be low since it was winter. I was wrong. The creek was raging and the only way to see Punchbowl Falls was to wade out into the icy creek. Well, I wasn’t going to pass up this opportunity, so I ended up hiking all the way back to the car to get my waders. By the time I got back to Punchbowl Falls, it was snowing hard. I donned the waders and ventured into the creek. It was difficult walking where the current was strong, so I pushed my way through the ice instead. There were floating chunks of ice in the creek and I had to be careful to avoid them as they could easily knock me off-balance. The shot below shows the fast part of the creek that I waded through. If you look closely you can see it was snowing hard when I took the shot. 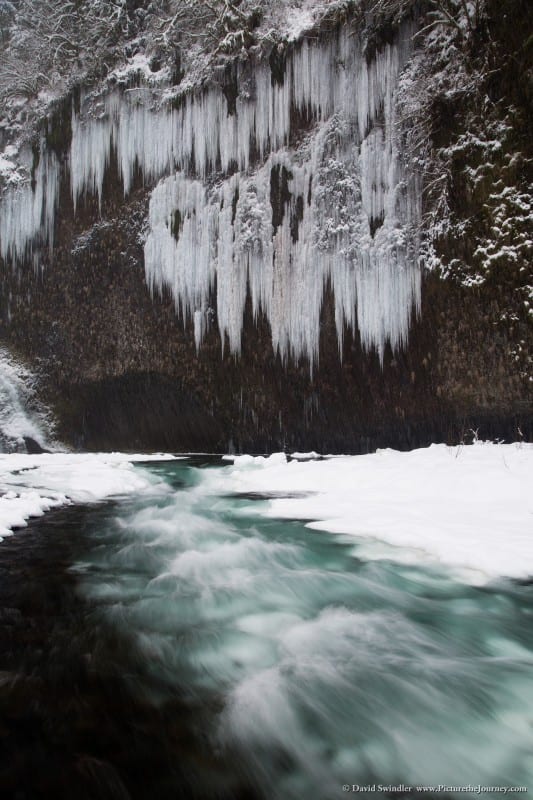 Once I got out in the middle, I got a few shots of Punchbowl Falls. My favorites were the ones with the ice cracks in the foreground (see below). Another one I liked was with moving ice floes in the foreground (second one below). All in all, it was worth coming back up here with my waders. Once I got out of the creek, my tripod was all iced up and I had to hike back with it fully extended. Although it can be challenging to shoot in these environments, the results are almost always worth the effort as these are views of Eagle Creek that not many people get to see! 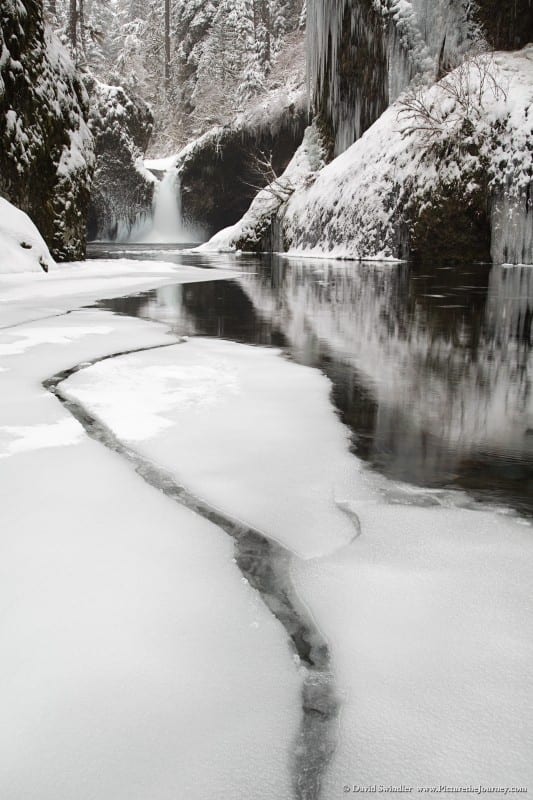 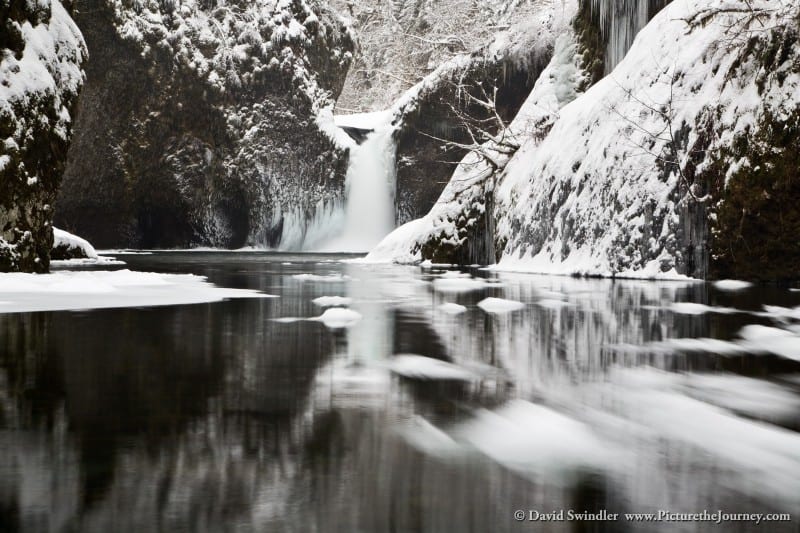