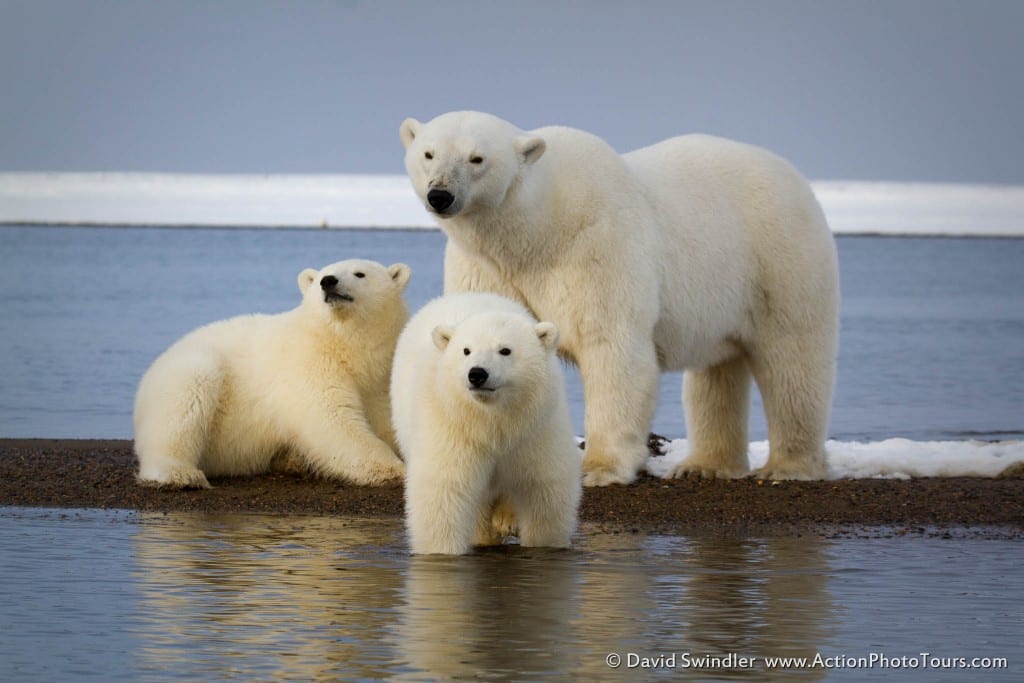 As discussed in my Previous Post, Kaktovik, Alaska is a mecca for polar bear enthusiasts. Polar bear cubs will usually stay with their mothers for 2.5 years while they learn to hunt and survive in one of the harshest climates on earth. The cubs are always so fun to watch because they are innately curious and interested in everything around them. In the shot below, these cubs found a root that had washed up on the beach and spent several minutes playing around with it. 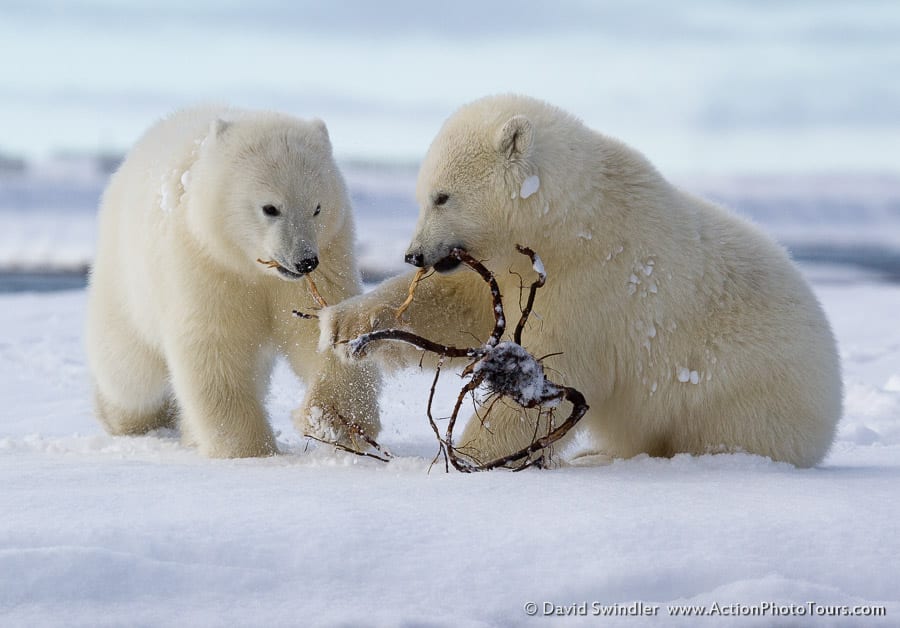 Some of my favorite bears were what you would consider to be teenage siblings. They are technically called subadults because they aren’t fully grown but no longer need their mother’s help. These bears had so much energy and were constantly playing and wrestling with each other. In the next shot, we were able to get a great angle on these brothers with the Arctic Ocean in the background. In the one after that, the youngsters looked like they were dancing! 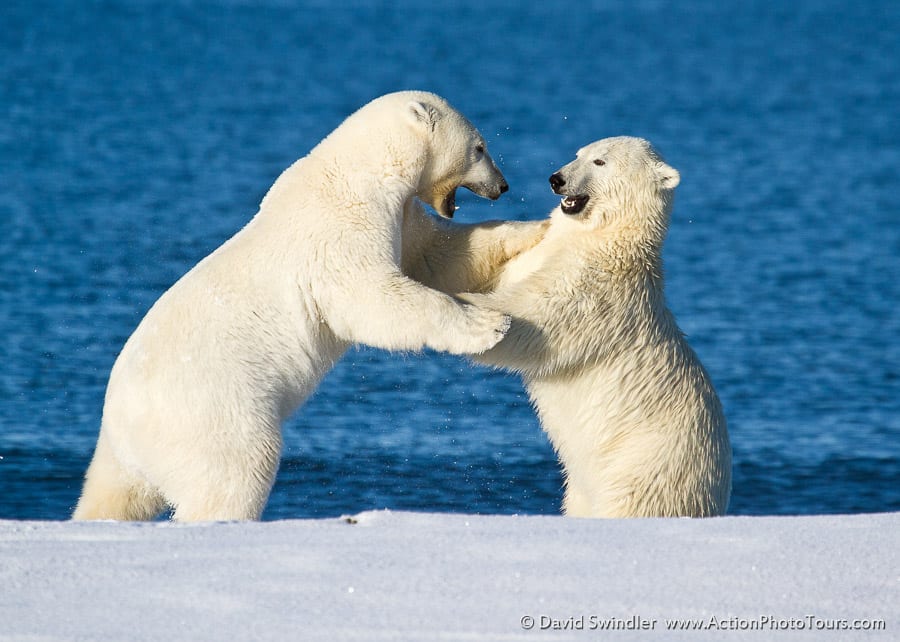 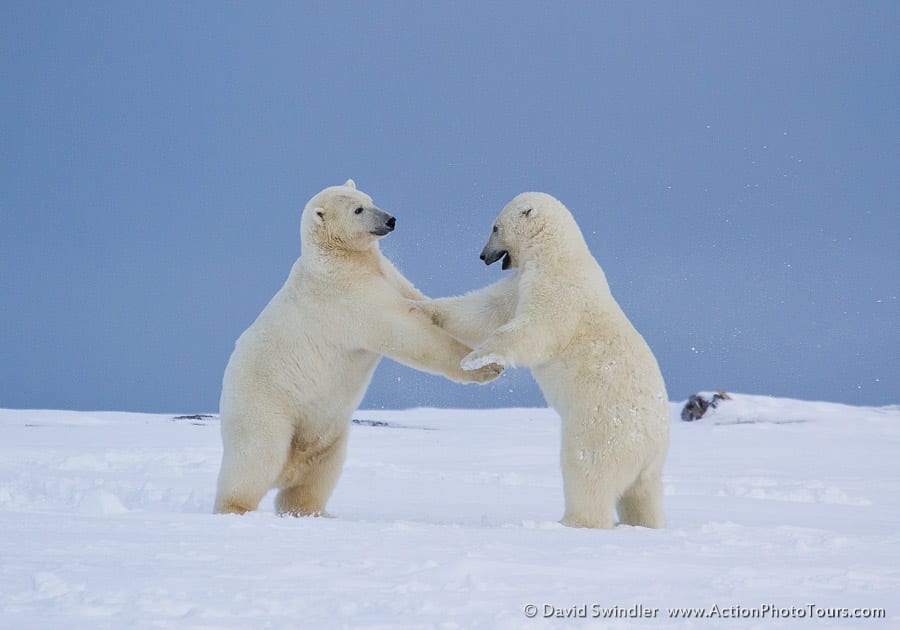 During one part of our trip, we had a great opportunity to get in very close to the bears since we were in deep water. The juveniles were naturally very curious about us and would venture out towards the boat. When they got too close, the boat operator would quickly back up. We would lower our cameras over the side of the boat and try to take some wide-angle shots of the youngsters as they approached. This was a lot of fun and produced some unique images. Mom always kept a close on them from the shore! 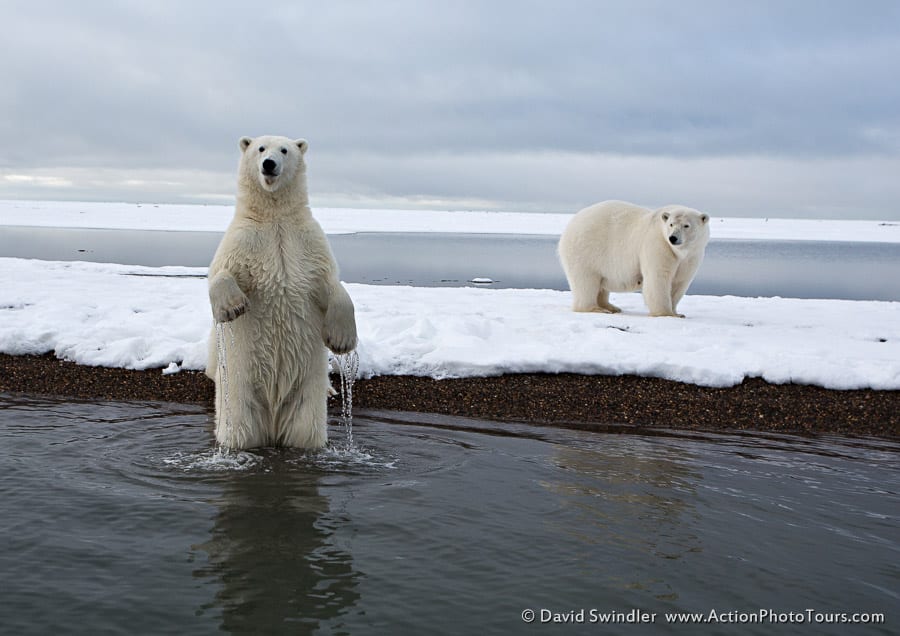 There were several “polar bear families” on the islands near Kaktovik. The bears seemed to be well fed and were just waiting for the sea ice to freeze over so they could venture out to hunt seals (their favorite food). The “families” seemed to have a very close connection to each other and were a delight to photograph. I call the shot below a good Tundra Lounge Chair! 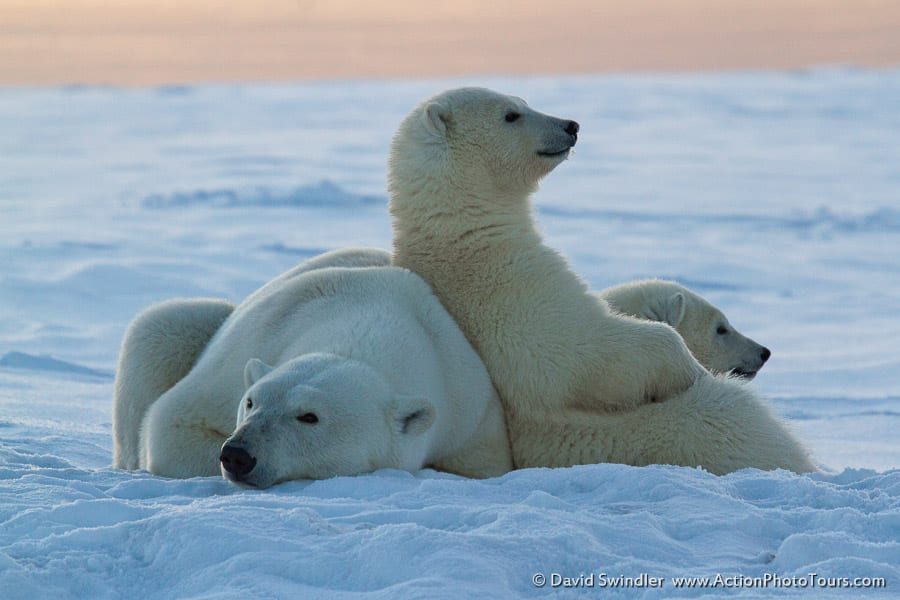 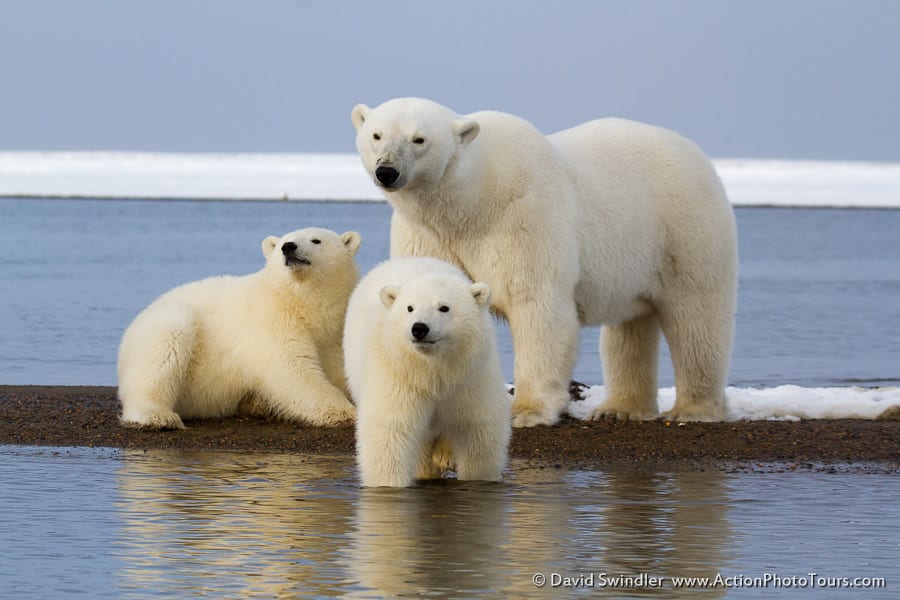 Sometimes, the bears would come swimming right next to our boat. They certainly didn’t look as intimidating in the water! 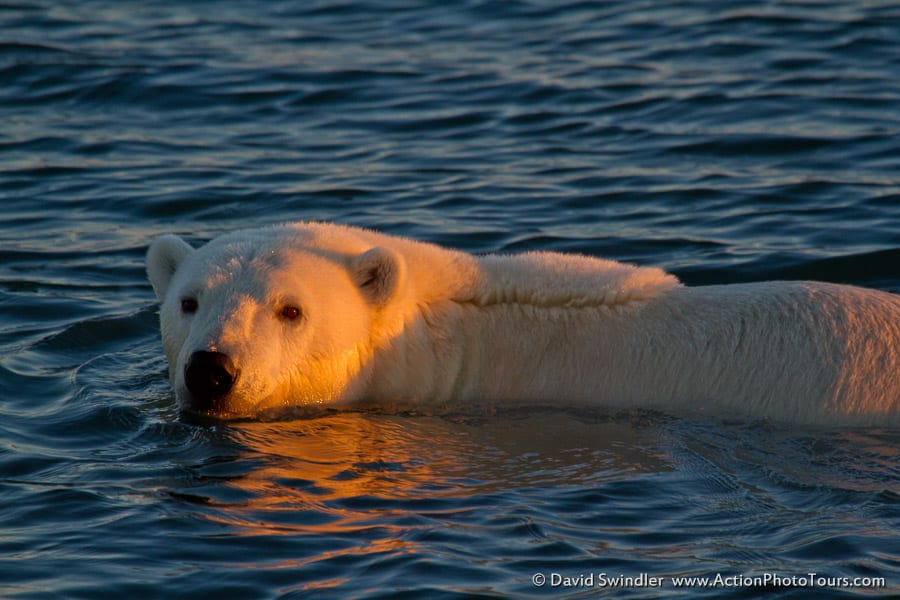 During one outing, we were favored with very calm conditions. The water in the bay was like glass which was awesome for getting some reflection shots of the bears. Sometimes, it almost looked like the youngsters were wondering who that bear was in the water! 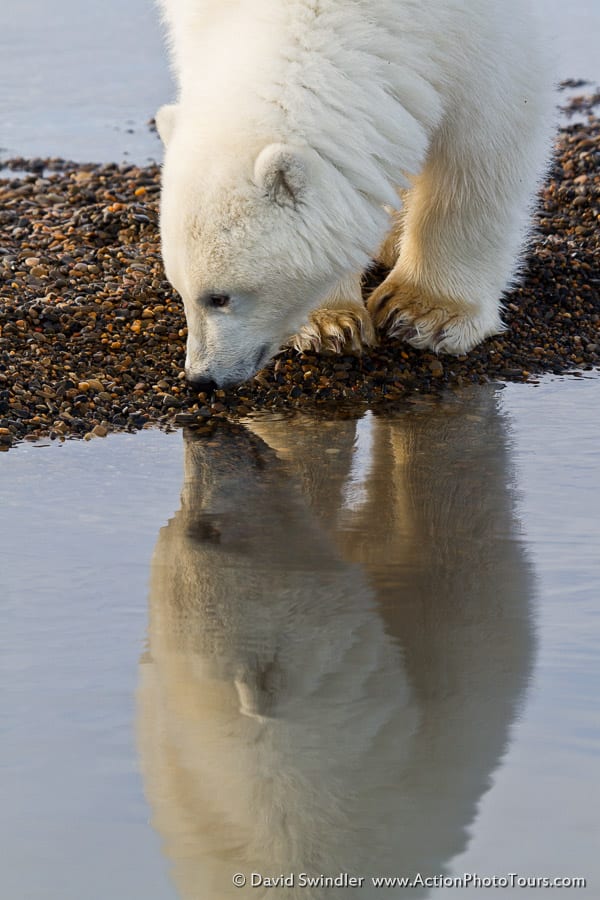 As the sun was setting one evening, a group of three bears were walking along the beach getting ready to swim across the channel. I really liked how they decided to line up from largest to smallest! 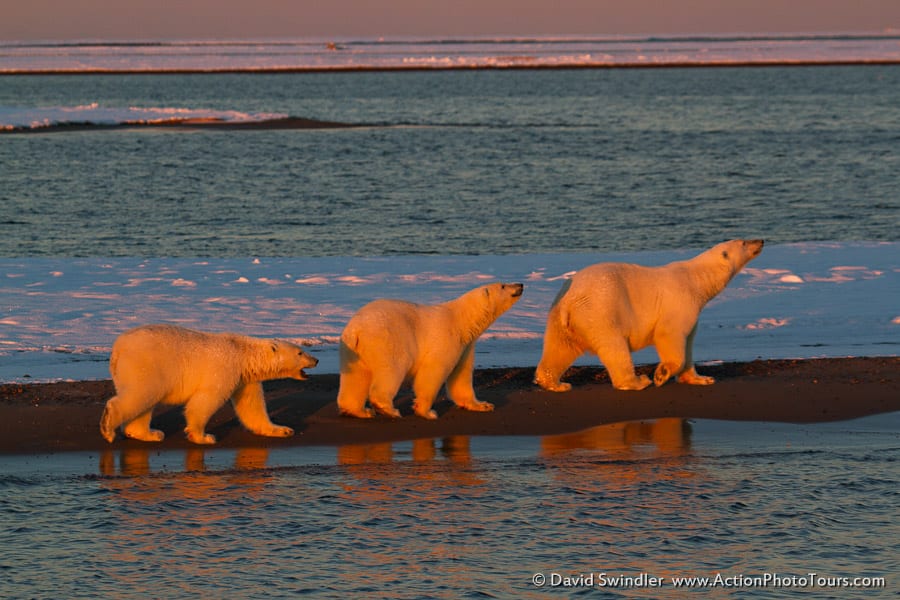 There were some very large bears around Kaktovik as well. We didn’t see the big guys as often since they tend to be more solitary. You can tell in the shots below that they are well fed! One of them even had kind of an attitude problem – he certainly didn’t mind showing us how he felt! 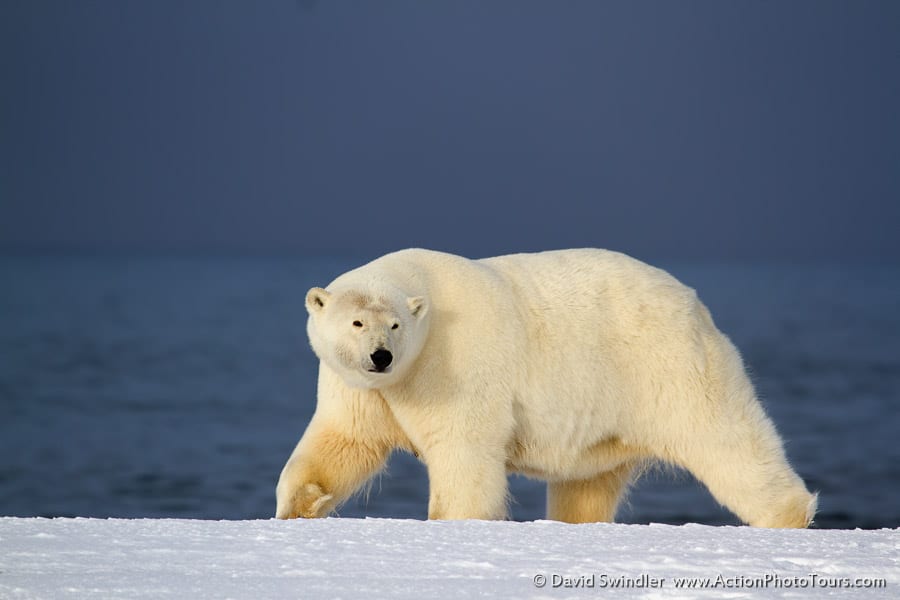 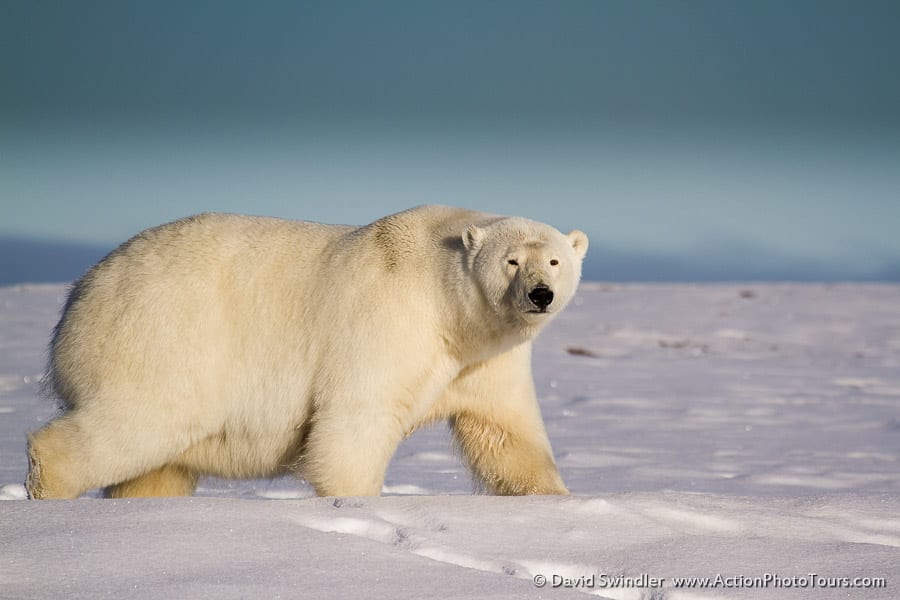 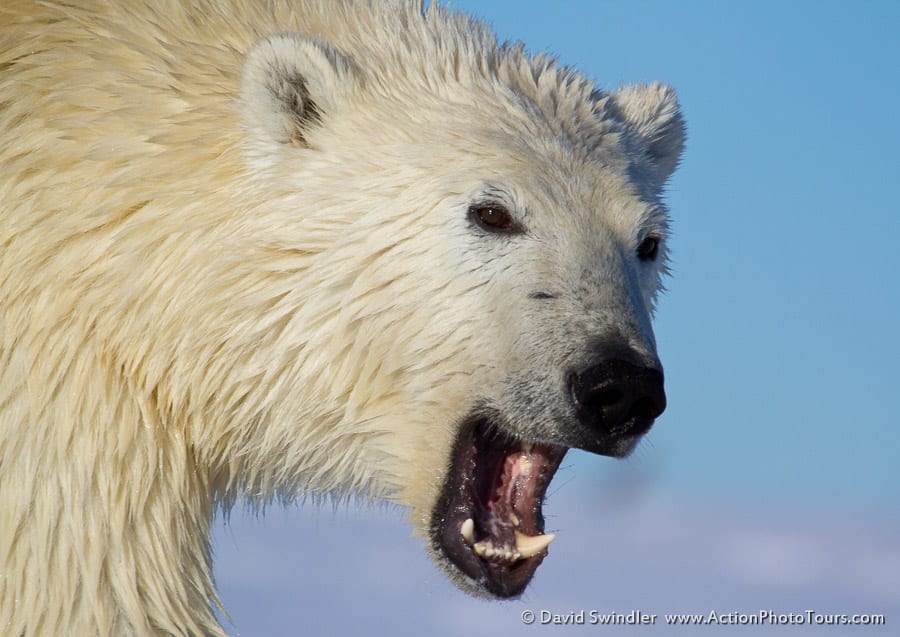 After the sun had set one evening, the moon began to rise on the horizon. There was still just enough light to photograph hand-held, but we had to hurry and find a bear as most of the bears had already left the island. We found this solitary bear just in time. He certainly wasn’t the most attractive, but it was nice getting a shot with the rising moon. 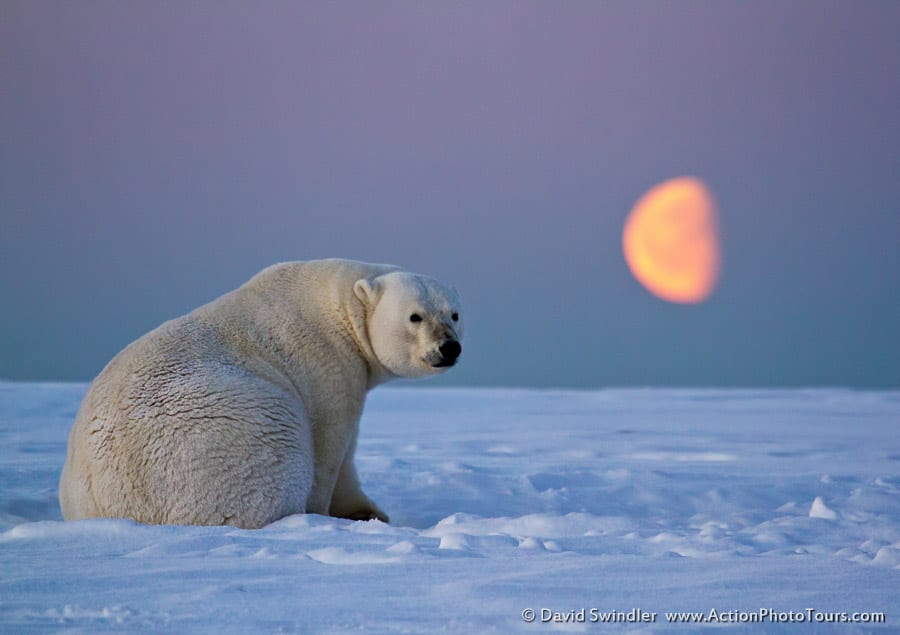 Overall, I’m very impressed with the polar bear photography in Kaktovik. That is why I’m leading a photo tour there in Fall 2014. Check out the trip details here. I’ll leave you with a few additional images. I really like the one below as it shows the sweet pink light you can sometimes get in the arctic. It was just so beautiful and I can’t wait to go back! 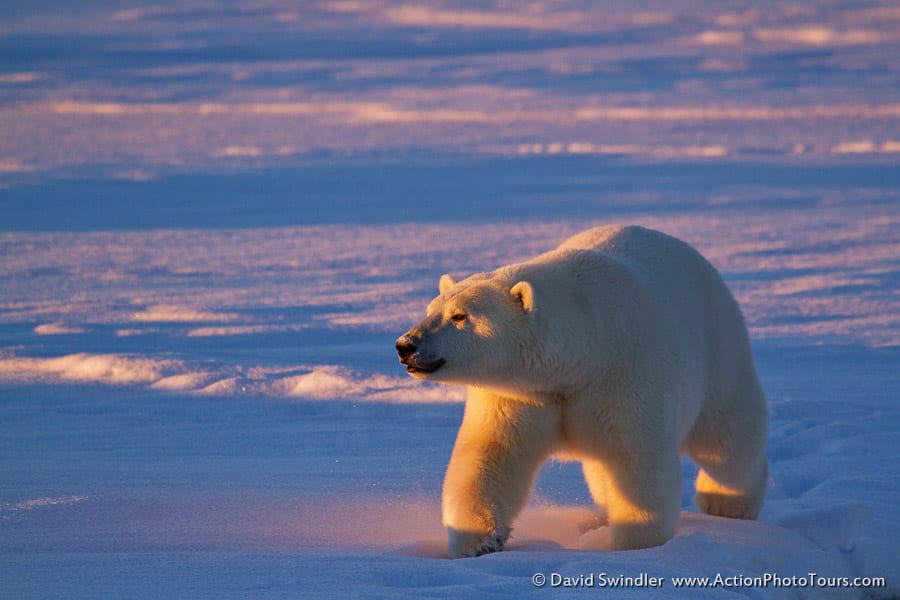 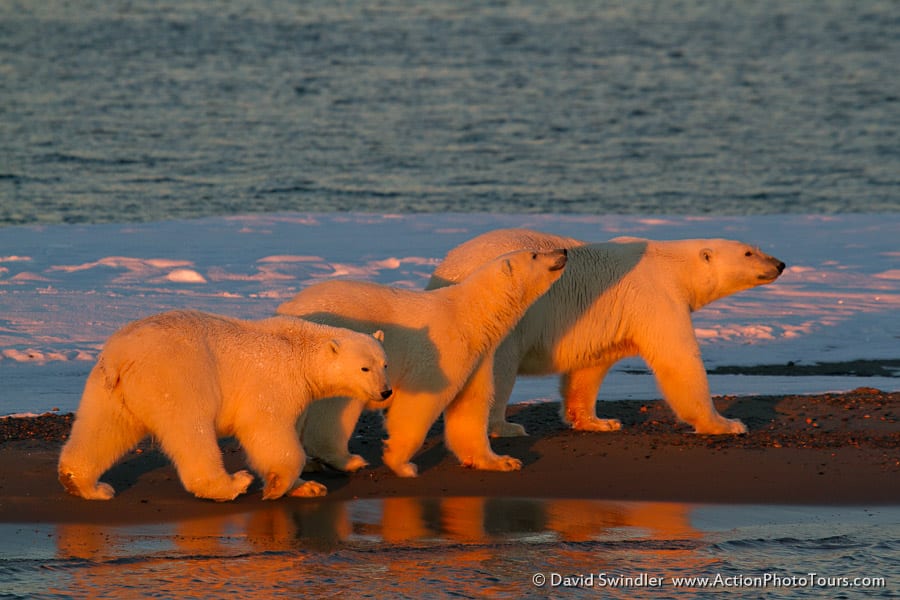 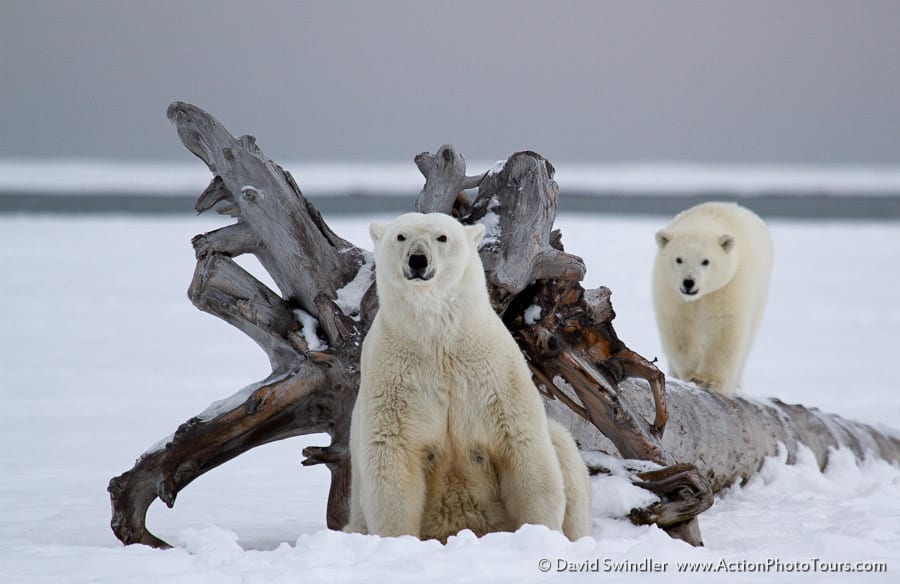 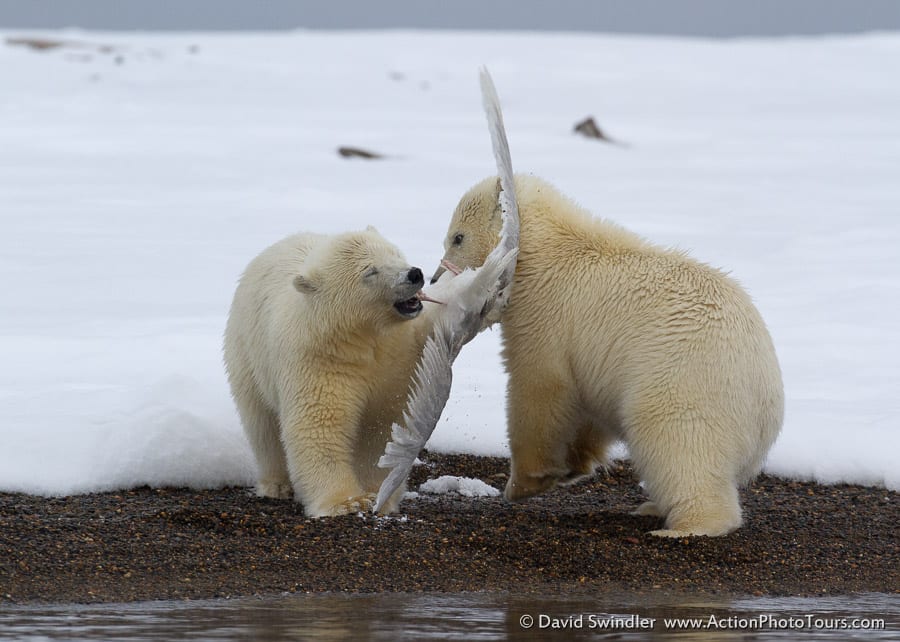 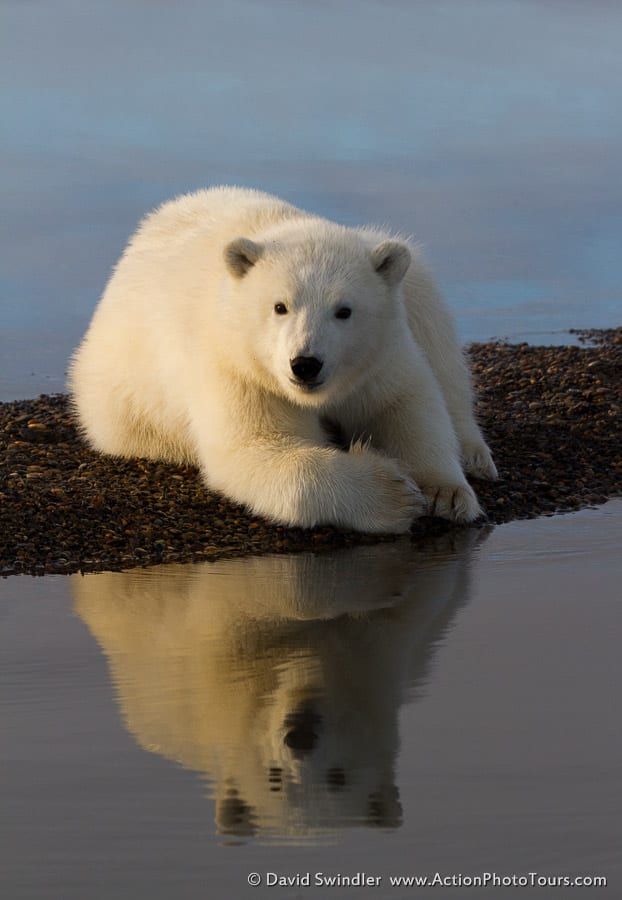 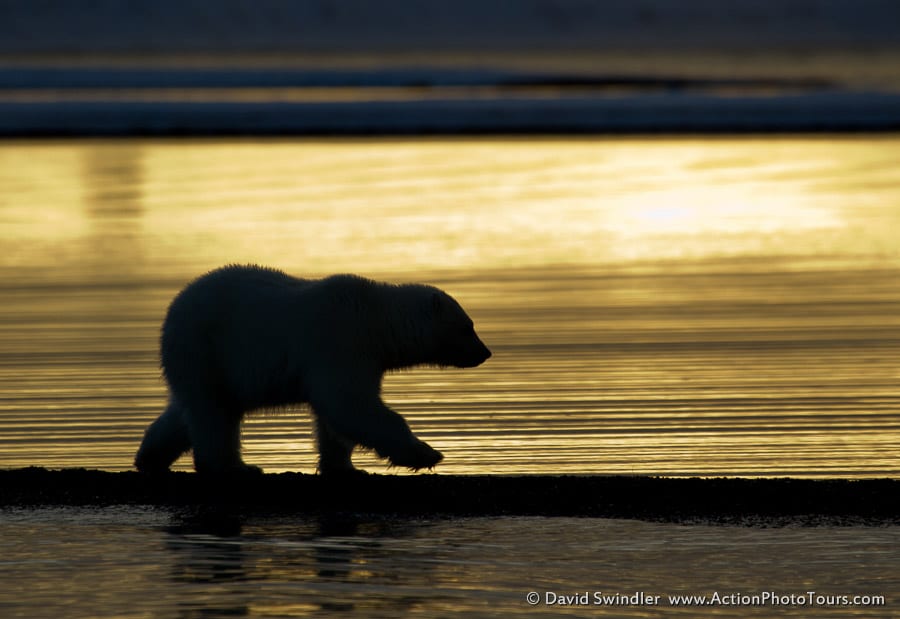 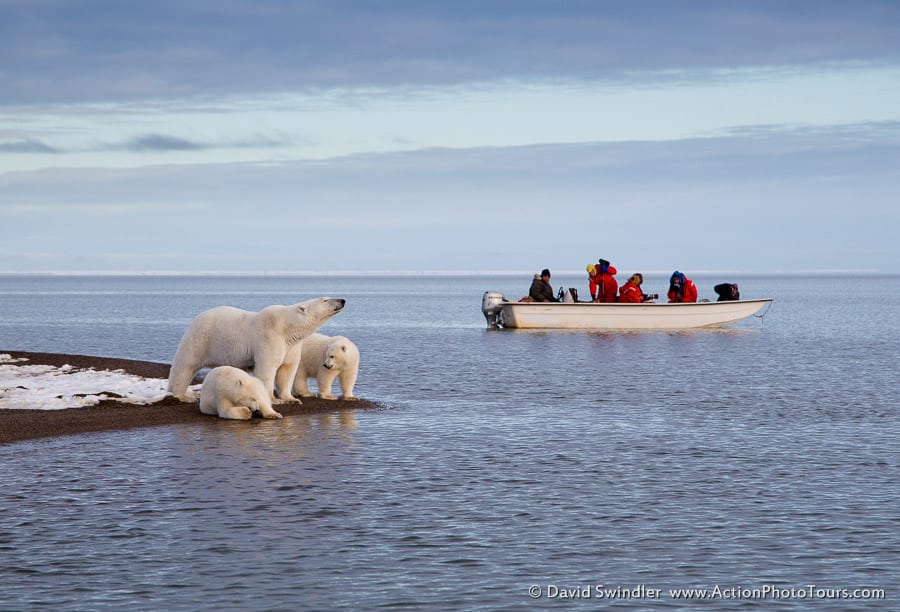