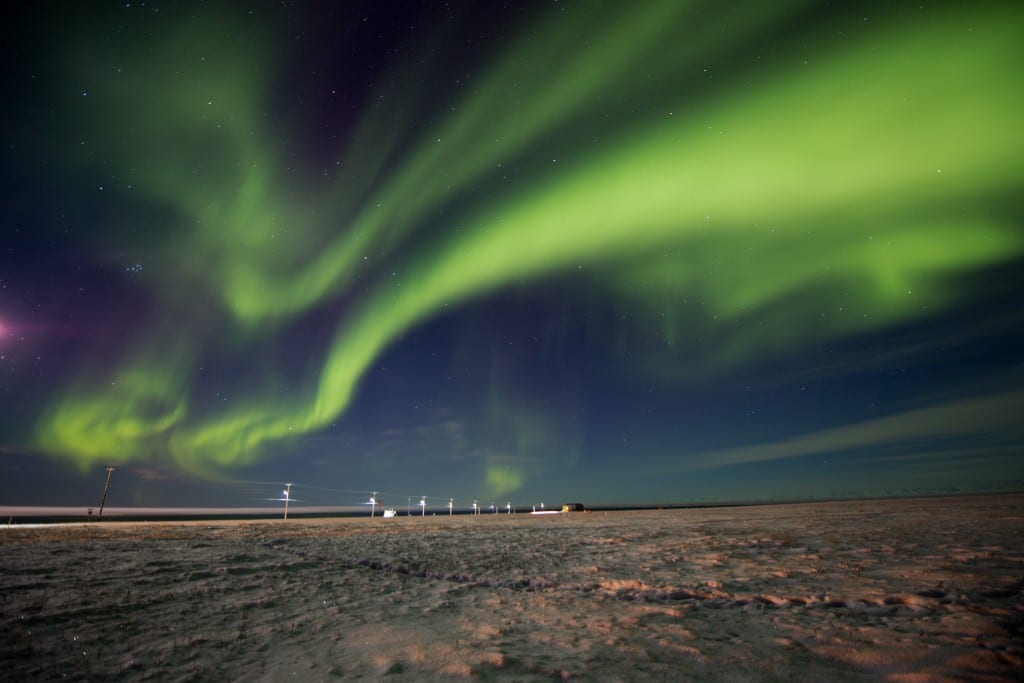 The Aurora Borealis, otherwise known as the Northern Lights, is one of the most mysterious and incredible phenomenon of the night sky. Early people were so perplexed by these light shows that they came up with myriad explanations, from evil spirits and ghosts, to bushfires from the spirit world. Nowadays, we know that aurora is the result of charged particles from the solar wind interacting with Earth’s magnetic field and upper atmosphere. The magnetic field directs these particles towards the poles which is why the aurora is most often seen near northern and southern latitudes. Collisions between these charged particles and atmospheric gases causes excitation. When the excited atom returns to their ground state, they release photons of light. Red colored aurora come from oxygen excitation in the highest parts of the atmosphere. If you see the aurora from far away, it will usually appear red since you can only see the uppermost part of the emission. Green aurora are actually the most common and also come from oxygen excitation but from lower down in the atmosphere. If you look carefully at the image below, you can see red aurora above the green. Other colors like pink and yellow come from a mix of red and green. Blue is quite rare and comes from nitrogen excitation in the lower atmosphere. 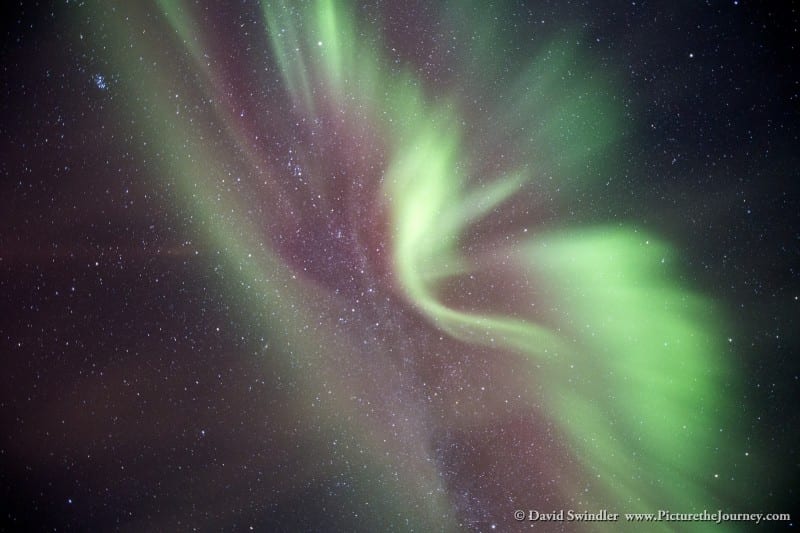 The best times to see the aurora are around the fall and spring equinox. Scientists don’t really know why that is, but one theory is that the interplanetary magnetic fields are aligned with the Earth during the equinox. If the interplanetary field partially cancels Earth’s field, it can open up a door in which charged particles can more easily enter the atmosphere. For Aurora Borealis, it is most often seen as a ring around the Northern Latitudes. From the map below, Northern Alaska, Central Canada, Iceland, and Northern Scandinavia would be prime viewing locations. In this article, I will concentrate on Northern Alaska. If you go during the fall equinox, temperatures will be much milder. However, it will probably be cloudy 90% of the time, making it difficult to spot the aurora. Most serious aurora watchers go during the spring. Even though it’s bitterly cold, skies are clear 90% of the time. I just happened to be in Alaska during the fall equinox for wildlife photography and indeed, it was cloudy most of the time. However, whenever I had a small break in the clouds, I always saw the aurora! I can only imagine how good it must be during the clear skies of the spring equinox. 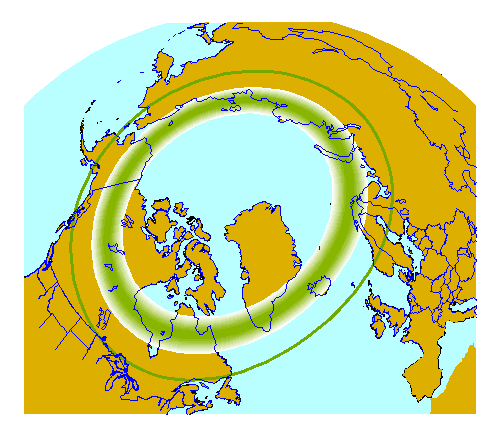 The first time I saw the aurora was from the remote Eskimo village of Kaktovic. Skies were looking clear after sunset, so I jumped on the computer and checked the aurora forecast provided by the Alaska Geophysical Institute. Their forecast goes from 0 (quiet) to 9 (very high). I was kind of dismayed when I saw the forecast for that evening was a flat zero. I was almost ready to give up and go to bed, but I decided to humor myself. I looked out the window, and saw what looked like glowing cloud in the distance. Not knowing what it was, I bundled up and headed out into the cold evening. As soon as I stepped away from the lights of the hotel, I was mesmerized by a swirling display of green lights stretching in a band across the entire sky. What an amazing sight! I walked a little ways from the hotel and took the shot below. The aurora was so bright I only needed to use ISO 400. The quarter moon that evening helped light the foreground snow. You can see some moonlight bleed-in on the left side of the image. The line of tracks in front of me is from polar bears. Needless to say, I was a little nervous walking around in the dark in polar bear territory! 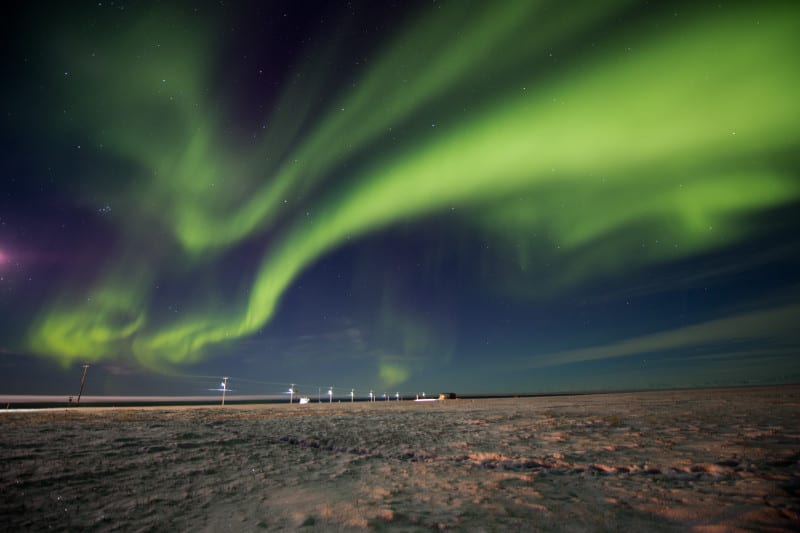 After this, I walked back towards the snow fence on the outskirts of the village. En route, I passed by a stump with a big ball of snow on it. In the dark, it looked like a crouching polar bear. I was so freaked out that my heart skipped a couple beats. It looked so threatening that I had to shine my headlight on it to convince myself it wasn’t real. I don’t know that I would have done if it had been an actual bear – perhaps use my tripod as a weapon? Anyhow, this is the image I got near the snow fence. The aurora was starting to fizzle so I had to use much higher ISO. I really liked the fence shadows that the moon was casting on the snow. 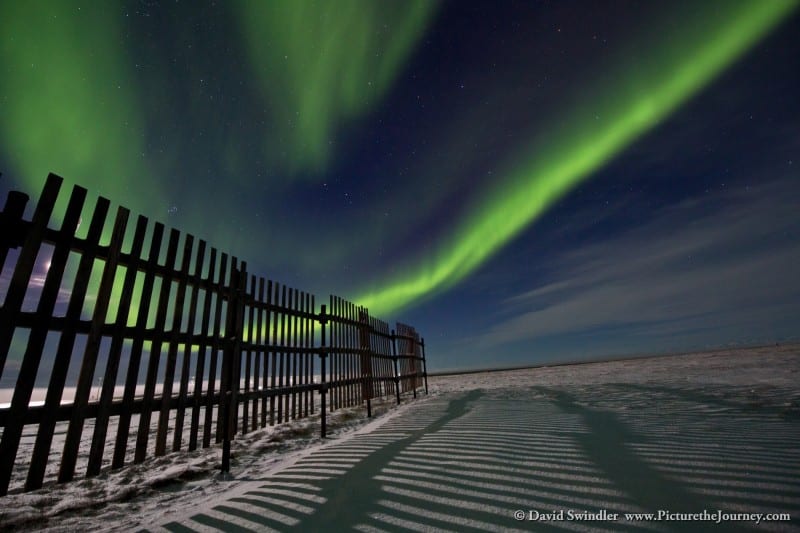 Later in my trip, I drove the Dalton Highway from Fairbanks to Prudhoe Bay and back. It took around 4 days for the journey. As I feared, it ended up being cloudy almost every evening. Even still, I would set my alarm and wake up every couple hours to see if there were any breaks in the clouds. One evening, it was snowing hard by the time I setup camp. I had little hope that I would see the aurora. Despite my yearnings for uninterrupted sleep, I still set my alarm. I got up at 1AM and it was still snowing. I got up again at 3AM and the sky had cleared just enough that I could see another great Northern Lights show! The shot below was taken in the Brooks Range. The mountain you see is actually quite large but it seems small in the picture since I shot it at 14mm (extreme wide angle). Light from a nearby pumping station for the Alaskan pipeline provided the light on one side of the peak. Having a few diffuse clouds in the sky really added to the image. 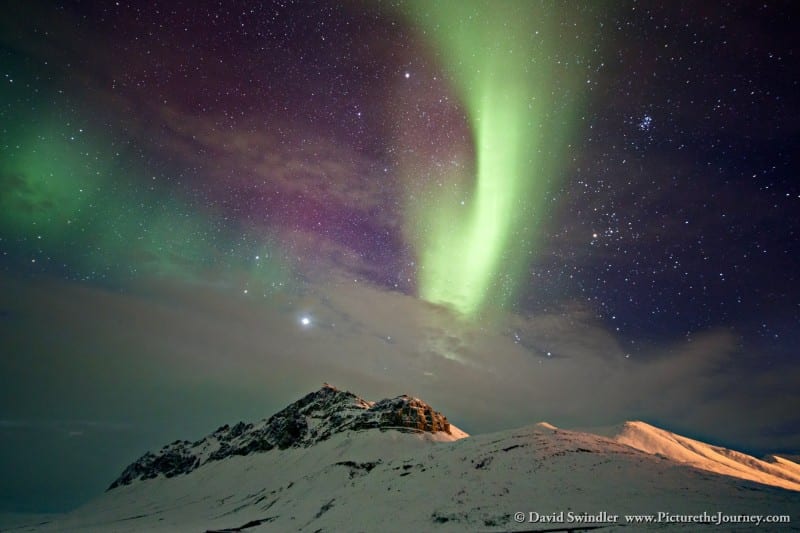 I only had a small time frame to photograph the lights as the clouds were intent on moving back in.

Here’s a shot with heavier cloud cover looking down the Dalton Highway.

If you ever ave the chance to see the Northern Lights, I highly recommend it. It’s certainly worth missing out on some sleep. I’ll leave you with one last vertical image from the Brooks Range. Happy exploring! 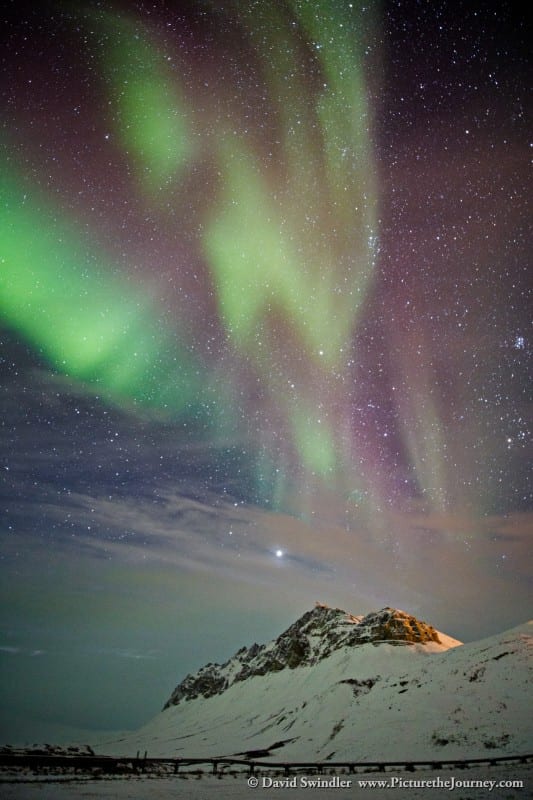