With 2014 now upon us, now is a great time to start making plans for the upcoming year. If you want to add a little adventure to the mix, make plans now to climb Mt. Rainier!  Located in central Washington State, Mt Rainier is a massive statovolcano that looms 14,411 ft above the surrounding peaks. Being the most heavily glaciated peak in the continental US, it attracts mountaineering enthusiasts from all around.  The standard route is called the Disappointment Cleaver (affectionately known as the DC route).  There are myriad routes up the mountain, some being much more difficult than others. The DC route is recommended for first time climbers and offers plenty of great scenery!  This is the route I will focus on in this article. In the photo below, climbers are ascending the final part of the DC Route above a sea of clouds. 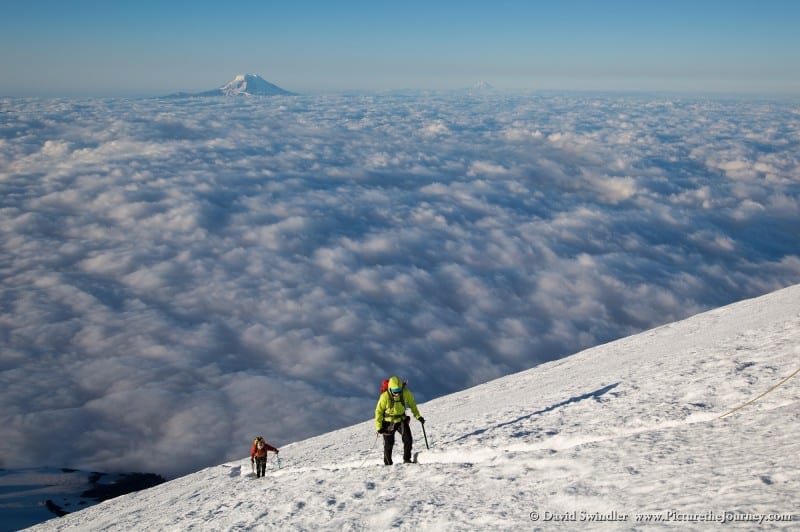 If you’re planning to climb on a busy weekend, make your reservations well in advance with the National Park Service.  They will charge a reservation fee in addition to a climbing fee.  The climbing fee covers the rest of the calendar year, so you can climb it more than once if you’d like.  If you don’t pay the climbing fee, you won’t be able to ascend beyond Camp Muir at 10,000 ft.  Day hiking to Camp Muir is also a popular option.  As far as technical gear goes, you’ll need an alpine touring rope (dry ropes are preferred), ice axe, harness, crampons, and prusik loops for self-rescue.  Although the mountain can be climbed in a single day, you’ll enjoy the journey much more if you take overnight gear and camp out.  The best time to climb is in June and July since the weather is more mild and there hasn’t been much snow melt.  If you wait until August, many of the snow bridges will have melted and you’ll have to navigate around more crevasses. 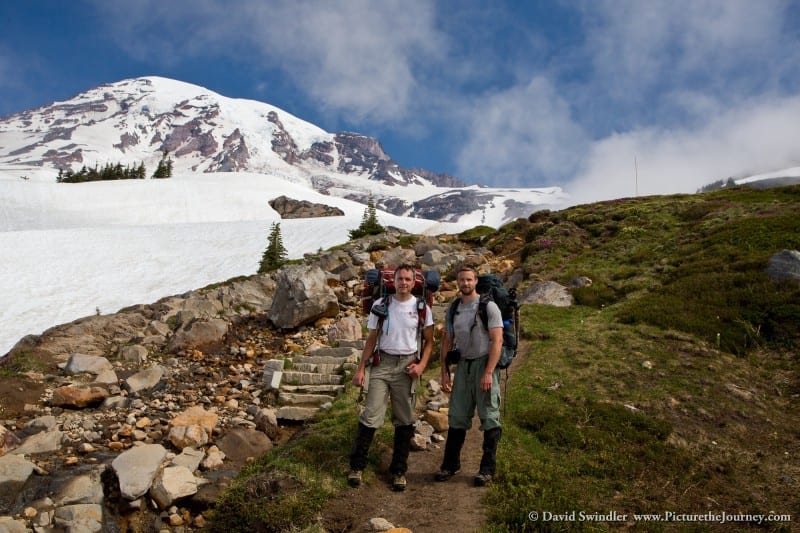 The climb starts at the Paradise Ranger Station at 5400 ft.  You’ll need to check in to get your climbing permit. We ended up climbing on the 4th of July weekend.  When we started, it was foggy with light rain at Paradise. After climbing about 1000ft, we were above the clouds and had a beautiful bluebird day (see shot above).  Don’t be fooled by the weather at lower elevations! 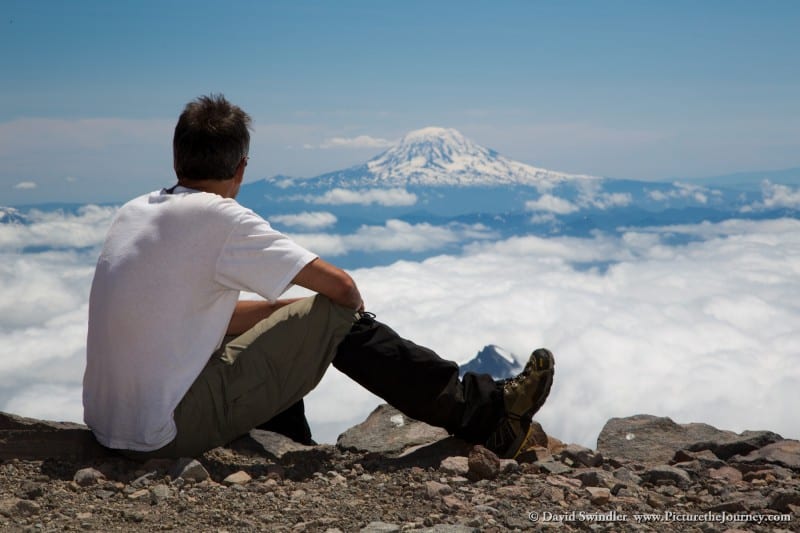 Next, you’ll start climbing up the Muir snowfield.  On a sunny day, the snow is soft and affords good traction (we didn’t need our crampons here). It’s a good slog and we were dripping with sweat by the time we arrived. This is a good spot to take a lunch break and it’s also the only place with restrooms on the mountain. In the shot above, my climbing partner Darin Miller takes in the view of Mt. Adams in the distance. 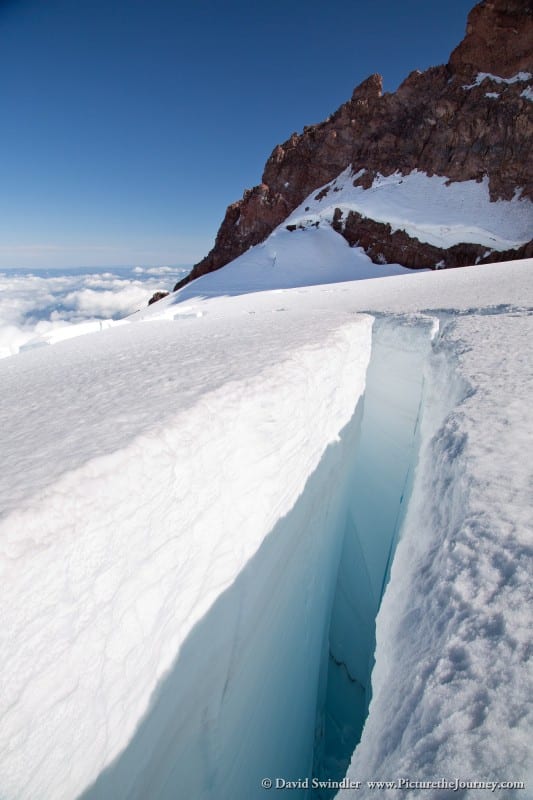 You can camp at Camp Muir, but I recommend going up another 1000ft to Ingraham Flats. It’s more scenic, far less crowded, and you’re that much closer to the summit. Beyond Camp Muir, I recommend you don your crampons and rope up as the route gets more exposed. As you approach Ingraham Flats, you’ll encounter your first crevasses like the one of the left. Once you get to Ingraham Flats, find a good spot to pitch your tent. Unless it’s snowed recently, there are plenty of places where people have dug out nice tent sites. You can see our campsite in the image below. 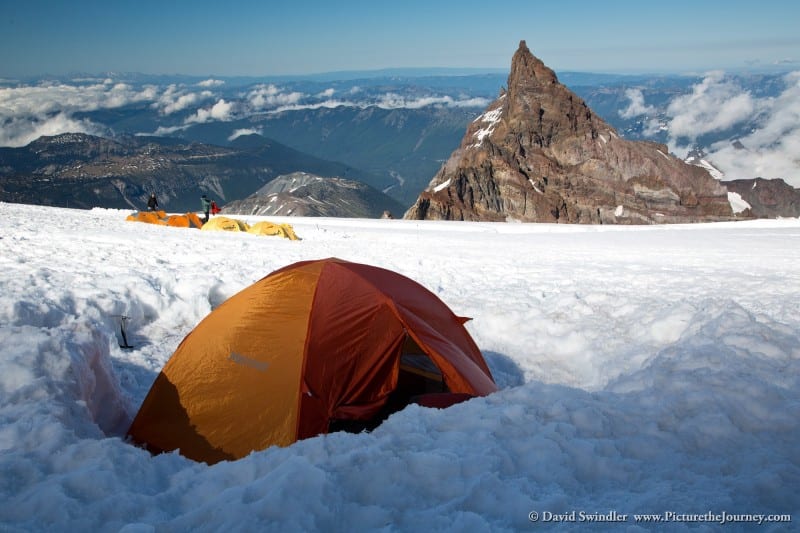 After setting up camp, we roped up and explored the area. There are some massive crevasses you can scout out. If you get close to the edge, make sure your partner is securely anchored above you. I was using my tripod to take some pictures. In one spot, I jammed my tripod legs into the snow for better stability. I didn’t notice it at the time, but I ended up losing one of the rubber feet in the snow. I had no idea where I could have lost it. I made my best guess and started digging. It was total luck that I found it. So be very careful using your tripod up here. I took the shot below next to one of our favorite crevasses. 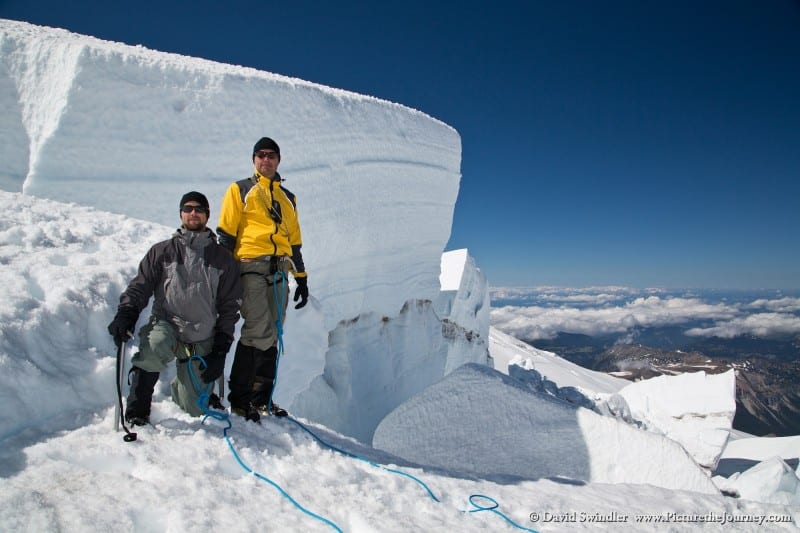 We went to bed early that night and set our alarms for 1:30AM. We were awakened at midnight by other groups passing by. They had come up from Camp Muir so they must have left very early. By the time we woke up, several groups had passed us and we could see a long string of headlights inching up the mountain. In my haste to get ready that morning, I totally forgot to pack my sunglasses. That wasn’t any fun climbing back down in such bright conditions. It’s a good idea to make a checklist of everything you need so you don’t forget important essentials. We made really good time and ended up passing all the other groups. By 4AM, we were on the rim of the crater and had it all to ourselves (see image below). It’s neat how you can even see the moon in this image. 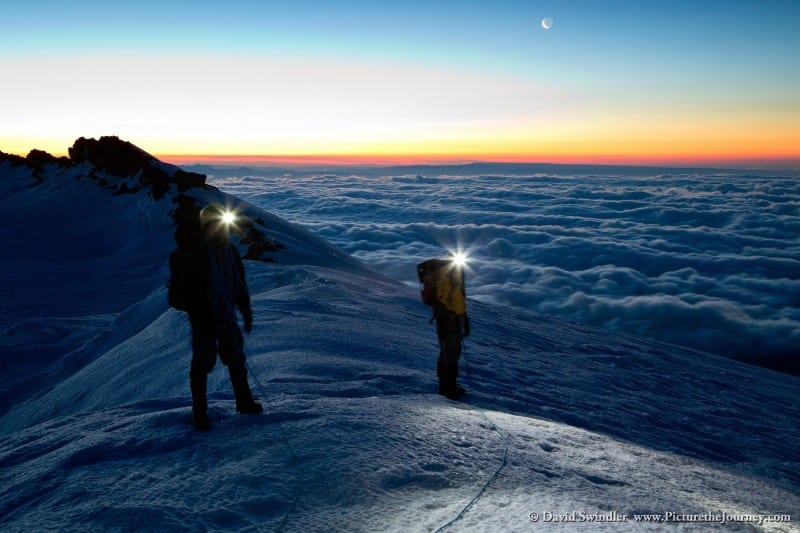 It was pretty cold up top before the sun came out. The wind was blowing and we were all sweaty. We ended up taking cover down in the crater to keep warm. When the sun came up, it was absolutely beautiful! With a sea of clouds below us, you really felt on top of the world. In the shot below, the rising sun briefly created soft magenta hues in the snow. I’m down in the crater and you can see how cold I look! 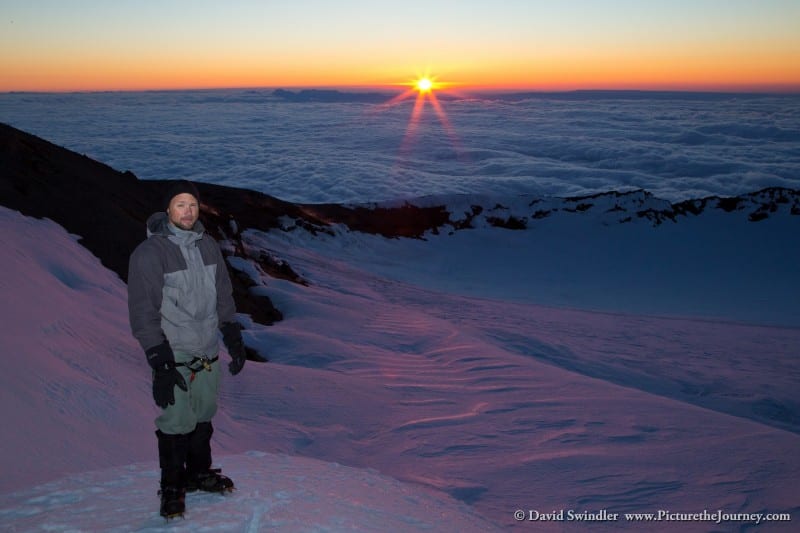 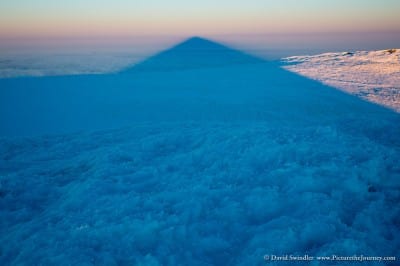 One neat thing on the summit was how you could see the shadow from the mountain over the sea of clouds. See image on the right. We spent a little more time on the summit taking photos but decided we’d better head back down before it got too bright (remember I forgot my sunglasses). It was neat seeing all the stuff we missed coming up. We had no idea how big some of those crevasses were that we had stepped over in the dark while coming up! In the image below, Darin is descending a more technical spot of the Disappointment Cleaver. On the DC Route, the trail is usually well trodden which makes it easy to navigate. 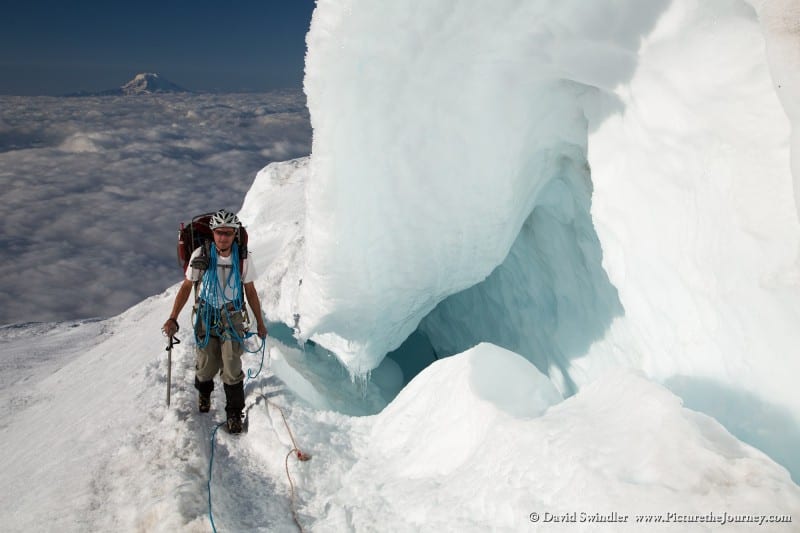 After making our way back down to Ingraham Flats, we took a quick nap in the tent and then broke camp. I was very glad to get my sunglasses back! We made good time on the way down. Since the snow in Muir Snowfield was pretty soft, we could run and slide down pretty fast. We had a great time on Mt Rainier and it certainly ranks up there with the best mountains I’ve climbed. As a parting shot, I’ll you leave with another image from the crater of the mountain in the pre-dawn hours. Have fun and be safe if you decide to climb it – it’s certainly worth the effort. 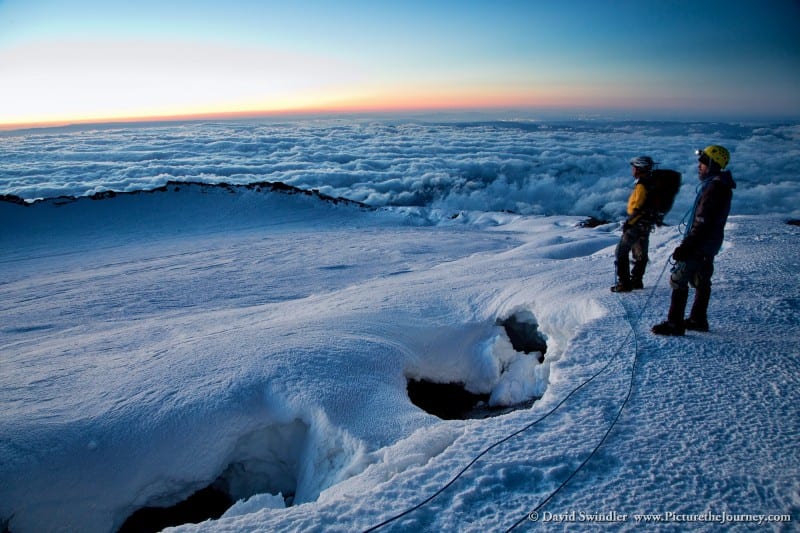