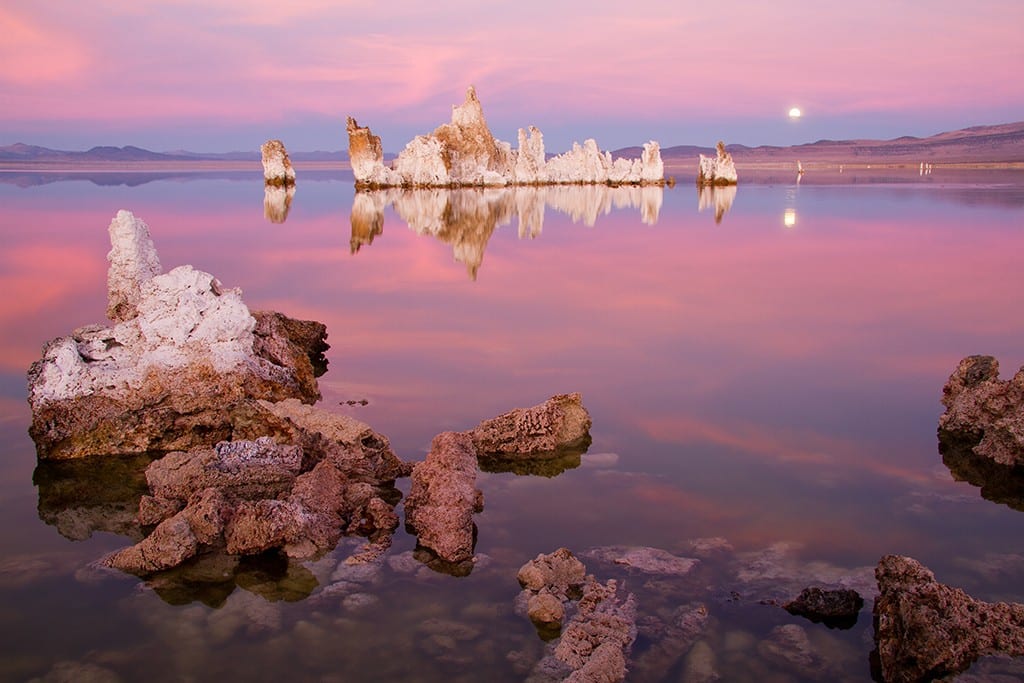 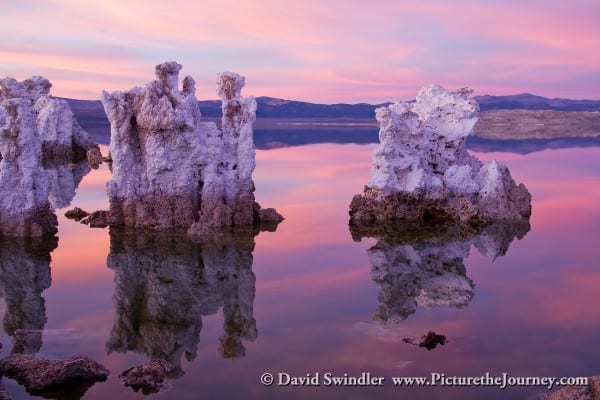 Mono Lake is just one of many interesting places you can visit East of the Sierra Nevadas in California. This is one of the oldest lakes in North America. Since it has no outlet, salts and other minerals accumulate and make the water quite alkaline (pH of 10). In fact, it’s more than 2.5 times as salty as the ocean! This salinity makes it prime habitat for brine shrimp and alkali flies, all of which help to support a large population of migratory birds. Due to a water diversion project back in the 1940’s, rainfall has not kept up with evaporation and by the 1980’s the level of the lake had dropped dramatically. This in turn exposed many areas of tufas along the shore. The tufas were formed when underground freshwater springs made contact with alkaline water of the lake. These limestone pillars are the signature symbol of the lake and are certainly of interest to the photographer. In the picture below, note the briny buildup along the edge of the lake, especially the white along the base of the rocks. 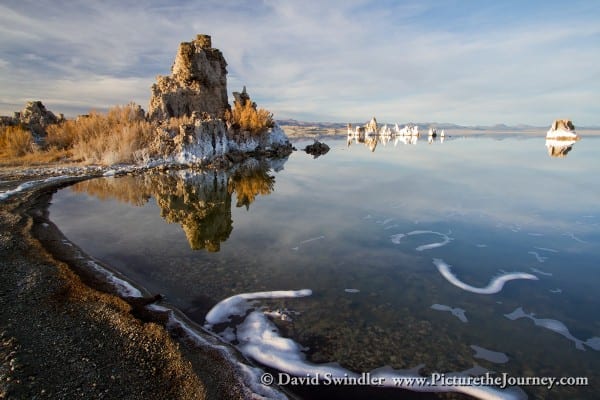 When to go? It all depends on what you plan to do. Spring and Fall are great times to see the birds. However, it is often windy during these months making it more difficult to photograph the tufa reflections. It can be nice during the summer, but of course it will be more crowded. This would be a nice stop on the way to Yosemite. As we move into the winter months, the road over Tioga Pass is closed and there is no easy access to Yosemite. I decided to visit Mono Lake in January. First, I knew it wouldn’t be crowded. Second, the winds tend to be fairly calm that time of year, and third, most all the birds are gone which is ideal for landscape photos. However, it was very cold in the mornings (5ºF) so be prepared for that. I didn’t dress quite warm enough and kept having to do calisthenics to keep warm. On the coldest morning, there were a couple photographers shooting a female model. She didn’t have much clothing on and looked very cold! I felt sorry for her. 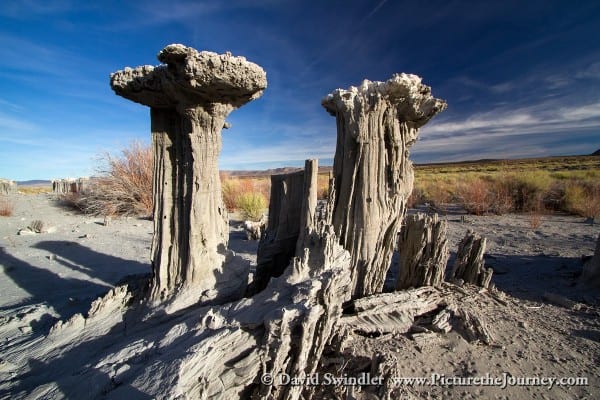 My favorite place is called South Tufa. You can also see tufas on the north side of the lake, but they aren’t as dramatic as the ones on the south. Before you go see the large tufas, I recommend taking the road to Navy Beach. From here, hike East along the shore and soon you’ll find a bunch of sand tufas. These were formed differently from the limestone tufas. In the picture above, it’s difficult to tell how large these are. In reality, they are only 3-4 feet tall, but can make for dramatic imagery when shot from a low perspective with a wide-angle lens. The shoreline in this area is interesting to explore. You’ll find plants coated in white calcium carbonate. It’s almost dreamlike. 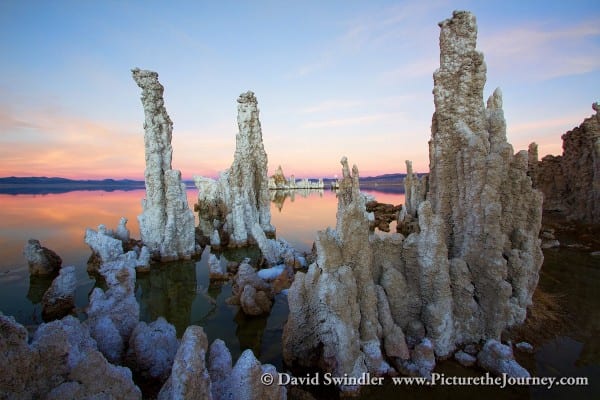 I happened to get very lucky my first night and got to really experience a phenomenon known as alpenglow. This occurs after the sun has dropped below the horizon and light is scattered by snow and ice particles in the lower atmosphere. The tall Sierra Nevada Mountains help accentuate the alpenglow and make Mono Lake a prime spot to see it. In the picture above, I thought that was all I was going to get for the sunset. I started packing up my gear and heading back. Much to my surprise, the light actually got brighter and more colorful! I hurriedly unpacked and started shooting. One such example is the first photo in this post.

To make a great evening even better, the full moon started to rise while all this was going on as you can see in the image above. I also took a few telephoto shots, but the far tufas just didn’t line with the moon how I wanted. I love it when a moonrise/set coincides with the sunset/rise. This opens up a whole host of options for the photographer. In fact, if I have some flexibility in planning a trip, I’ll try to time it for days like this! 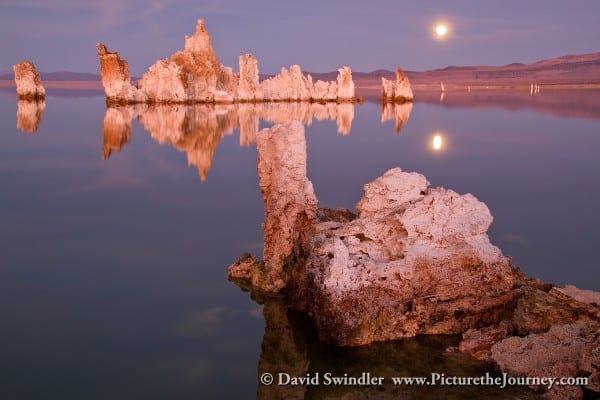 However, the best was still to come. All of the sudden, things got really bright with a deep orange ambiance. Remember, this is almost 20-30mins after the sun had set. The effect lasted no more than a couple minutes, but it was true alpenglow for sure. The moment was magical and pictures didn’t really do it justice. When the effect was over, it was amazing how quickly everything got dark.

The next morning I got up well before sunrise and took some shots under the full moon. In the image above, the moon was just starting to set. Pre-dawn light from the east provided the foreground illumination. Unfortunately, these tufas were really big and even my wide angle lens wasn’t quite wide enough to frame the shot the way I wanted to. As the sun came up, I realized just how great the previous evening was. To see what I mean, check out the image below. It’s not that it’s a bad image – it just doesn’t have the “wow” factor that alpenglow can provide. If you’re ever passing through the area, make sure you stop at South Tufa. It’s definitely worth staying for sunset – who knows, you might get lucky too! 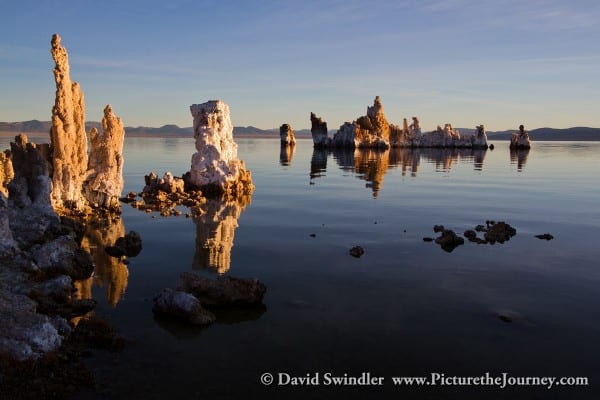