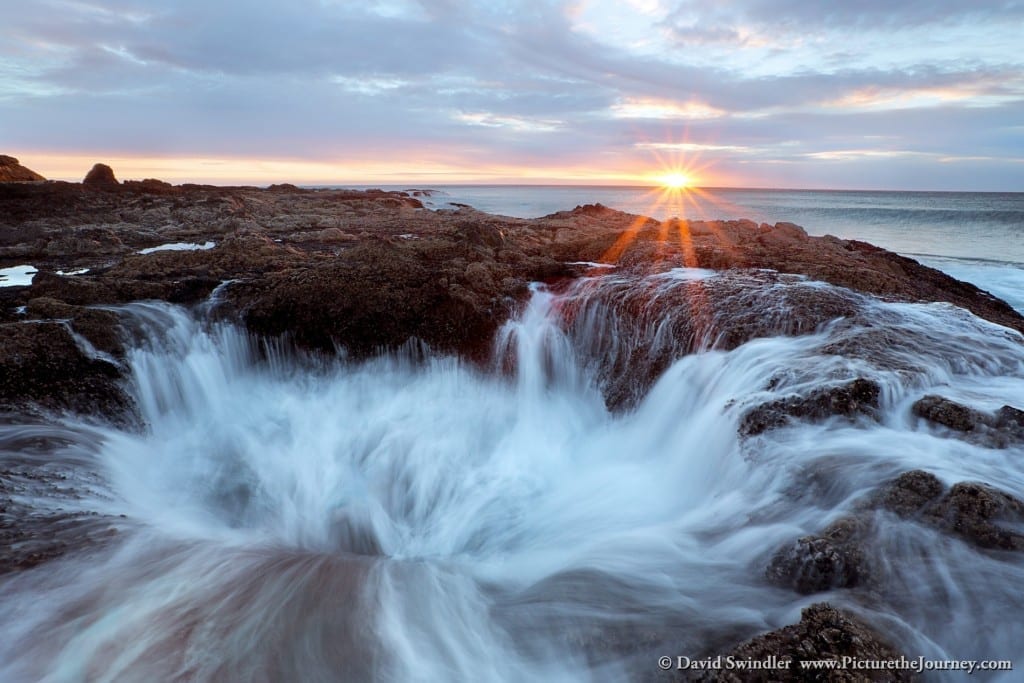 I’ve wanted to photograph Thor’s Well on the Oregon Coast for some time now. When conditions are right, this little hole in the rock can look like the drain of the Pacific Ocean! Located in the Cape Perpetua Scenic Area, Thor’s Well is a quick walk down from the highway. Having been a landlubber all my life, I must confess my knowledge of oceanic trends is limited. However, I thought I would be smart by timing my visit when high tide coincided with sunset. In theory, high tide should make the well much more active. I downloaded several free apps for tide charting. My favorite is an Android App called DGS Tides. It’s very easy to see exactly when high/low tides will coincide with sunrise/sunset. As the day of my planned visit got closer, I was happy to see decent weather in the forecast with partly cloudy skies. 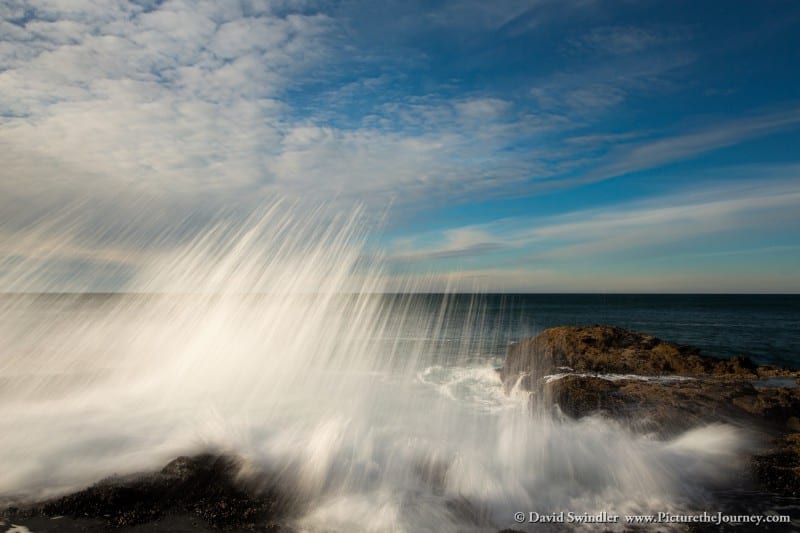 While I was waiting for high tide to set in, I wandered around the rocks near Thor’s Well. There were many places for awesome photographs if you get the right kind of wave action. In the shot above, I used a long exposure to catch the aftermath of spouting wave. I thought it was neat how it looked like upside down rain. Since it was mid-afternoon, I had to use a polarizer and 3-stop ND filter to get a slow enough shutter speed (1/5 sec). 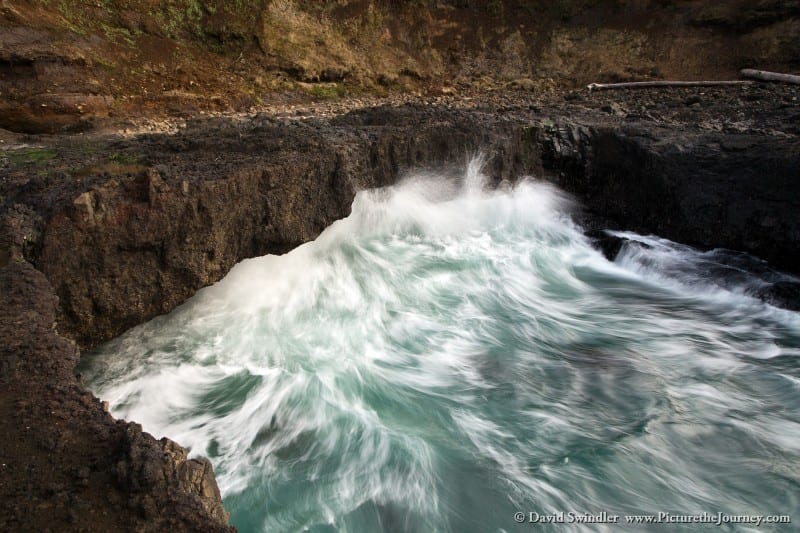 The picture above gives you a good sense of what the rocks around Thor’s Well look like. This spot reminded me of a big washing machine. Occasionally a big wave would come in a crest up over the lip. Every time it happened, I was busy taking pictures somewhere else. Of course, when I was ready and waiting, it never happened and I lost interest and went somewhere else. It’s impressive just how loud it can be when a big wave smacks into the rocks.

This shot was one of my favorite wave action shots. The sun was getting lower and provided a nice glow in the water. Since I liked the effect of 1/5 sec shutter speed on previous shots, I used it again here to get those nice streaks in the water. 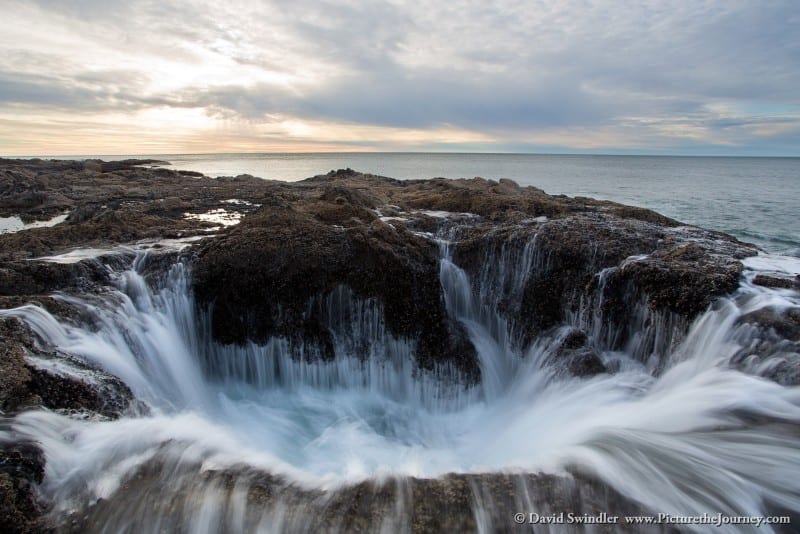 It was time now to head over to Thor’s Well. The clouds were getting heavier and the light was starting to get flat. In addition, Thor’s Well wasn’t nearly as active as I had hoped it would be. There was another photographer there that had been out here before. He told me that while the tide can be important, it’s not nearly as important as the size of the swells that day. Since a big storm was moving in, there was a strong east wind that had dropped the swell size to a paltry 3-4 ft. In order for Thor’s Well to really be popping, you want swells around 20 ft! Thus, I learned that good weather isn’t really optimal for Thor’s Well. You’ll actually get more dramatic pictures on days with stiff west winds or storms – that is if you can keep your front lens element and equipment dry! 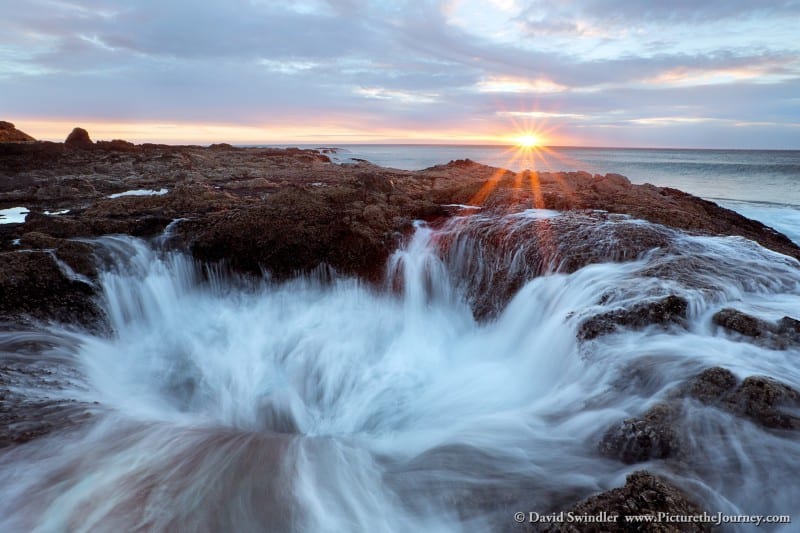 As the evening progressed, the swells continued to get smaller and smaller. There was almost no action at Thor’s Well. Just before sunset, the sun managed to peek through the clouds as it was kissing the horizon. The light was perfect but we didn’t have any waves! The ocean was about as flat as it could possibly be. Then out of nowhere, a rogue wave appeared. The other photographer and I held our breath hoping this would be “the one.” Fortunately, it was! A surge of water gushed through the well, thoroughly soaking our lower extremities (I was glad I had waders on). Although this wasn’t the “Drain of the Pacific Ocean” shot I had originally hoped for, it’s certainly interesting in its own right. Next time I go to Thor’s Well, I’ll be watching both the tide and the swell forecasts to ensure I get a good combination. 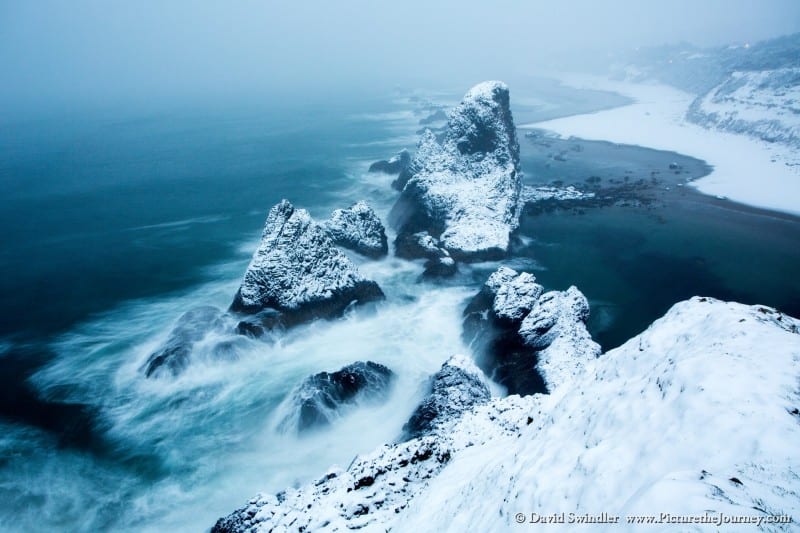 I spent the night high up on the Cape Perpetua bluffs. The east wind was blowing furiously and sounded like a freight train through the trees. When I woke up the next morning, things were completely different. Everything was coated in a fresh blanket of snow! At times, it was snowing so hard I couldn’t drive more than 25 mph. I went over to Seal Rock and took the shot above. At this point, I realized that staying on the coast for more photography wouldn’t be too productive since the snow was forecast to continue for several more days. Thus, I ended up heading inland to photograph the waterfalls around Silver Falls. That ended up being a good decision. Stay tuned for my blog next week to learn more about it!