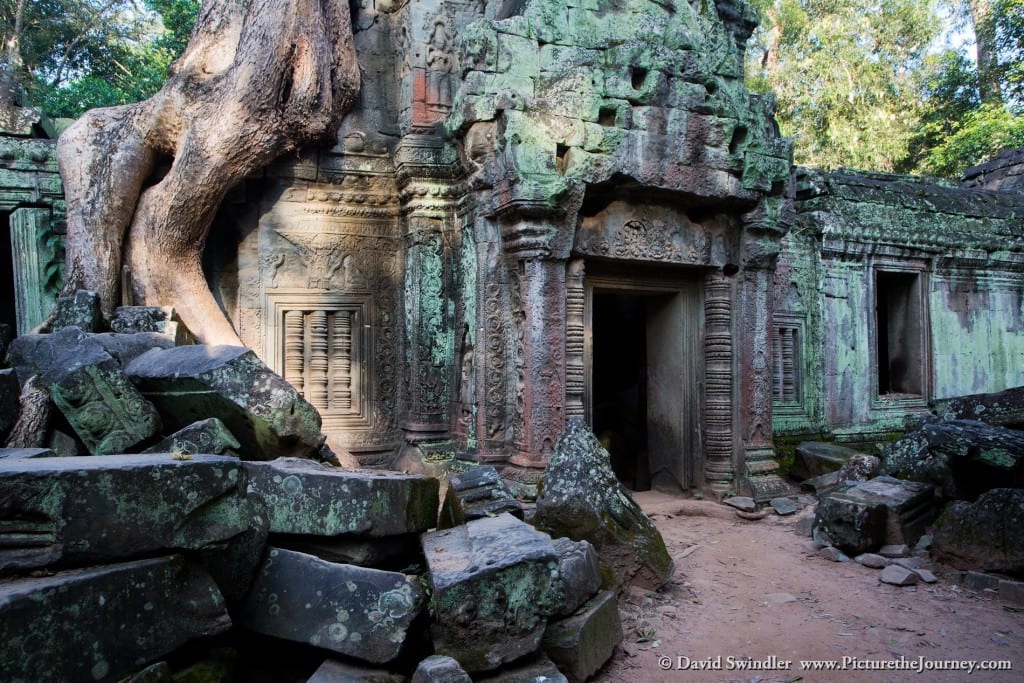 I had the privilege of spending a few days exploring the vast archaeological complex known as Angkor Wat. Situated in northwest Cambodia, Angkor Wat was built by ancient Khmer civilizations stretching from approximately 800 to 1300 AD. At its zenith, Angkor Wat supported more than 750,000 inhabitants. However, by the 14th century, it began a rapid decline and was soon wholly abandoned. Historians don’t know exactly why the city was abandoned. We do know that Thai invaders sacked the city in 1431, but its decline was already in full force by then. Whatever the reason for its demise, the jungle soon began to reclaim its territory and the ruins were soon covered. Centuries later, explorers found the city and began clearing away the overgrowth. Being such a large site, there were several temples that the authorities decided to leave in their ‘natural state’ so people could see what most of Angkor looked like prior to the 19th century. One of these sites is known as the Temples of Ta Prohm. 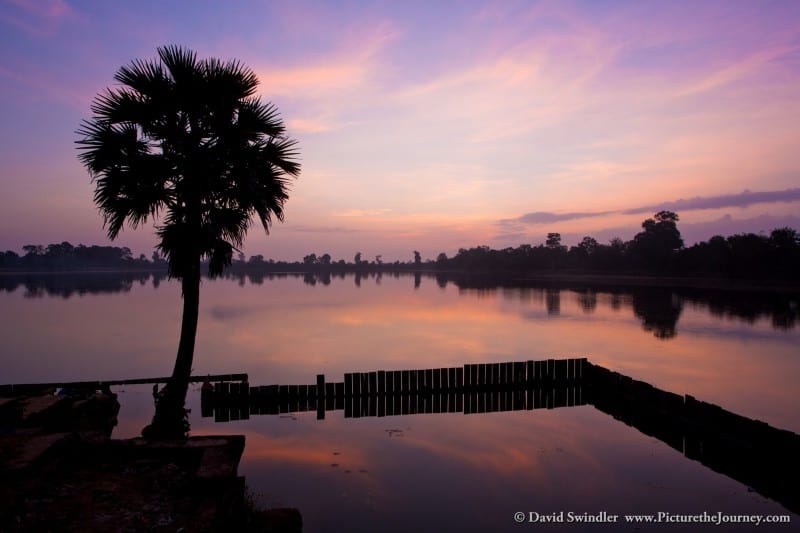 We started our day well before sunrise and went out to Srah Srang, a man-made reservoir that has held its water for more than 900 years. Srah Srang means Royal Bath. Early inscriptions state that the reservoir was made for the benefit of all animals except for the dyke-breakers (i.e. elephants). It was very peaceful that morning as we listened to the quiet sounds of the surrounding jungle and watched the soft morning colors appear. 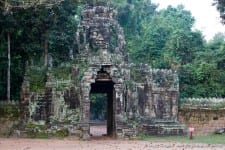 Across the street was a small temple complex called Banteay Kdei. You can see the entrance gate on the right. However, we didn’t have time to visit since we needed to get to Ta Prohm. 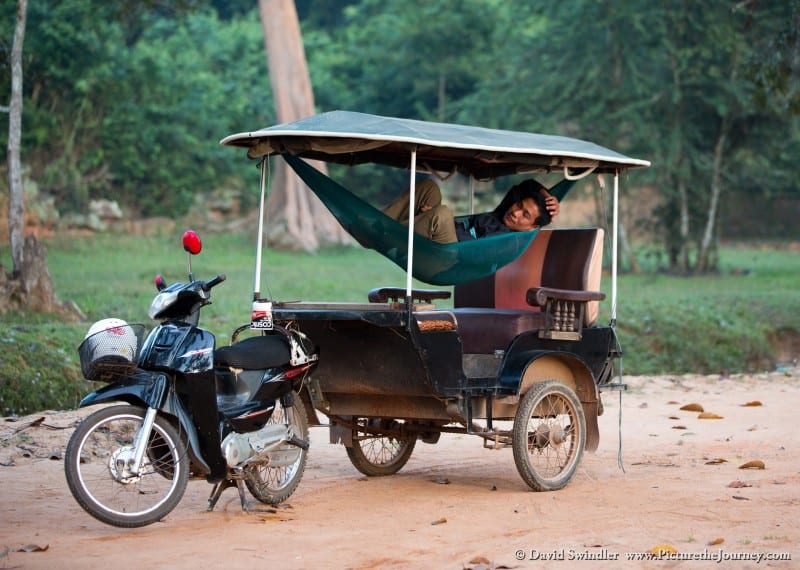 To get around, we hired a tuk-tuk driver. They are awesome. For just $15/day, they’ll pick you up in the morning and take you around wherever you need to go that day. They were even accommodating to a photographer’s schedule. They would pick us up at 4:30 AM and stay with us until well after sunset. While we were exploring the temples, they would wait outside and take it easy.

When we got to Ta Prohm, I was distracted by the misty sunrise over a nearby rice paddy. I ran over and grabbed this shot below before entering the temple complex. 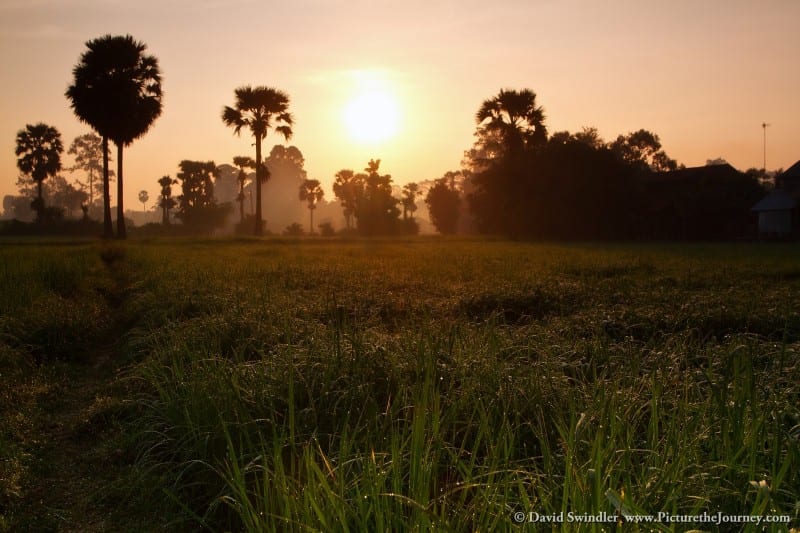 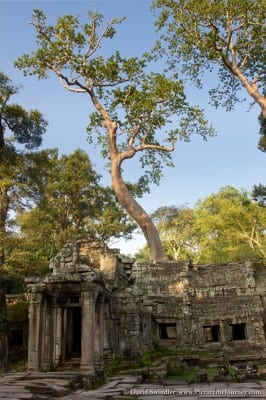 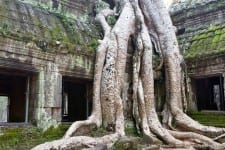 The first thing that caught my eye was how there were trees growing right through the temples! Most of these large trees are silk-cotton trees. When a seed is deposited in the superstructure of a building, a tree can start growing. In time, the roots completely envelop and entwine the stonework. While the tree is alive, it adds support to the buildings. However, when the tree dies or falls over, the buildings crumble. Thus, Ta Prohm is in a slow state of decay. The next time I visit, chances are good it won’t look like what I remembered. In some of the temples, they have added some metal support structures (see image on right). However, for the most part, it’s left in its primitive state.

Due to its exotic setting, Hollywood took notice and filmed the movie Tomb Raider on location. It truly is a unique temple that still has that wild and exploratory “Indiana Jones” feel to it. If you plan to visit, I recommend going very early in the morning. It was great having it to ourselves for a couple hours before the hoards of tourists begin showing up around mid-morning. I was hoping for a cloudy day for the best photography, but unfortunately it was sunny. Thus, I had to be choosy with my shots to avoid harsh contrast. 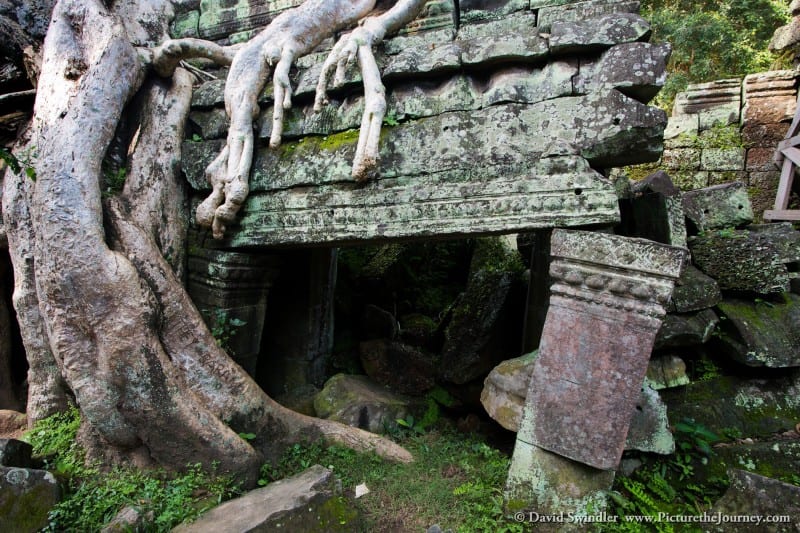 One of my favorite things about this place was how they’d let you wander and explore the ruins despite the crumbling nature of the infrastructure. You’d see places like this shot above where it seemed like things could fall down any minute. 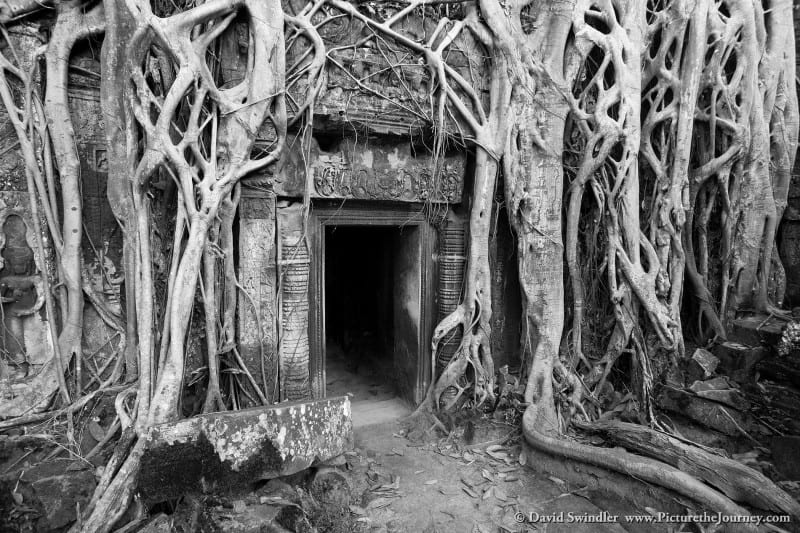 This shot was my favorite from Ta Prohm and I loved how it rendered in black and white. I ended up getting a large canvas print made that I hung-up in my living room. I can’t tell you how many kids have asked me what was behind that door… 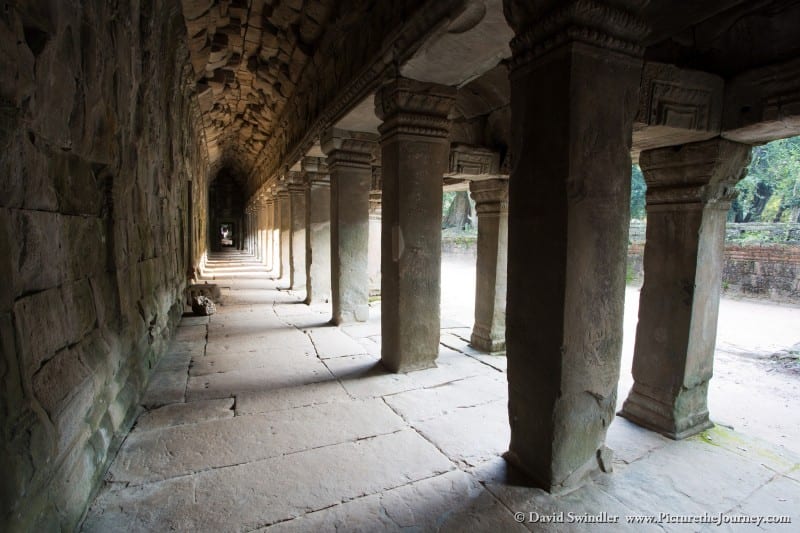 It was fun walking in and out of the small passageways as we maneuvered through the temple complex. The interplay of shadow and light helped make images interesting. Since the eye is drawn to the brightest part of an image, the eye follows the light beam into the image giving it more of a 3D appearance. 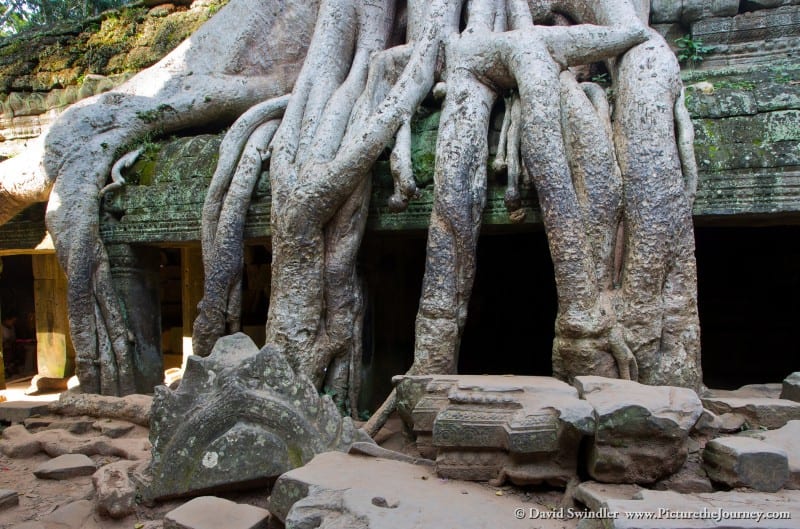 These massive tree roots are one of the most popular parts of Ta Prohm. Unfortunately, we got here just as all the tour groups were also arriving. I waited for quite a while to get a clear shot without people in the way. By the time everyone cleared out, the sun was up high enough I started getting contrasty light. Next time I go, I’m heading over here first thing in the morning. I’ll hopefully be offering a Southeast Asia photo tour soon. Ta Prohm is just scratching the surface of what you can see in Angkor Wat. I guarantee you’ll be enthralled with everything else in the vicinity. Subscribe to my blog and let you know once the trip is scheduled. Happy exploring! 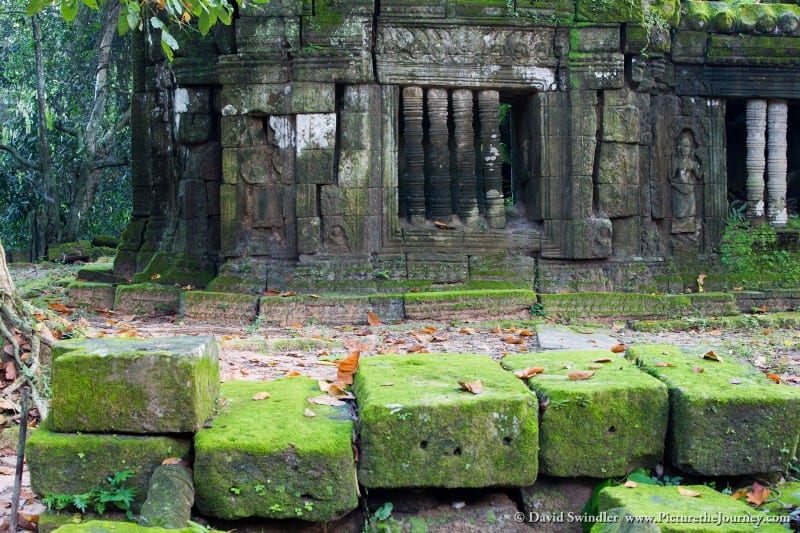