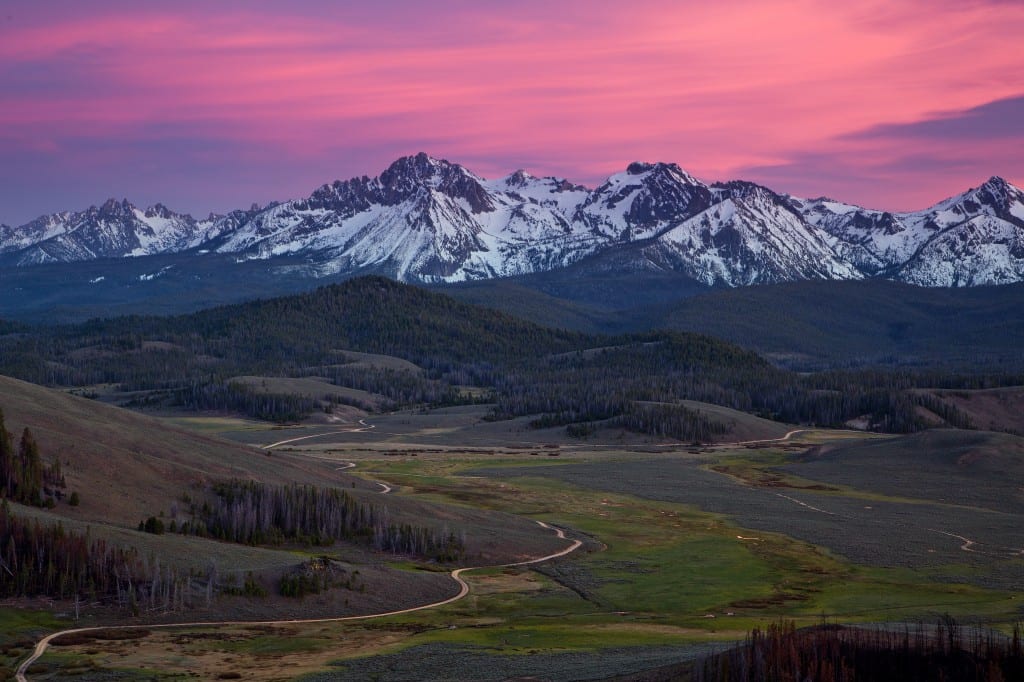 In early May of this year, I ventured up to Idaho’s Sawtooth Mountains for some weekend photography. This area boasts a plethora of great alpine scenery and fun hiking routes. So why would you want to go in the Spring? First, the mountains still have snow on them which lend well to photographs. Second, it’s too early for mosquitoes. Third, the weather is quite temperate. And finally, there aren’t many people yet and you’ll find plenty of space at the campgrounds. For a great sunset destination, head north up Basin Butte Road from Hwy 21. Up here you’ll have a great panoramic view of the Northern Sawtooth Range. In the shot below, you can see the road winding up through the valley and the fire mosaic in the trees. There are a number of good lookout spots on the way. 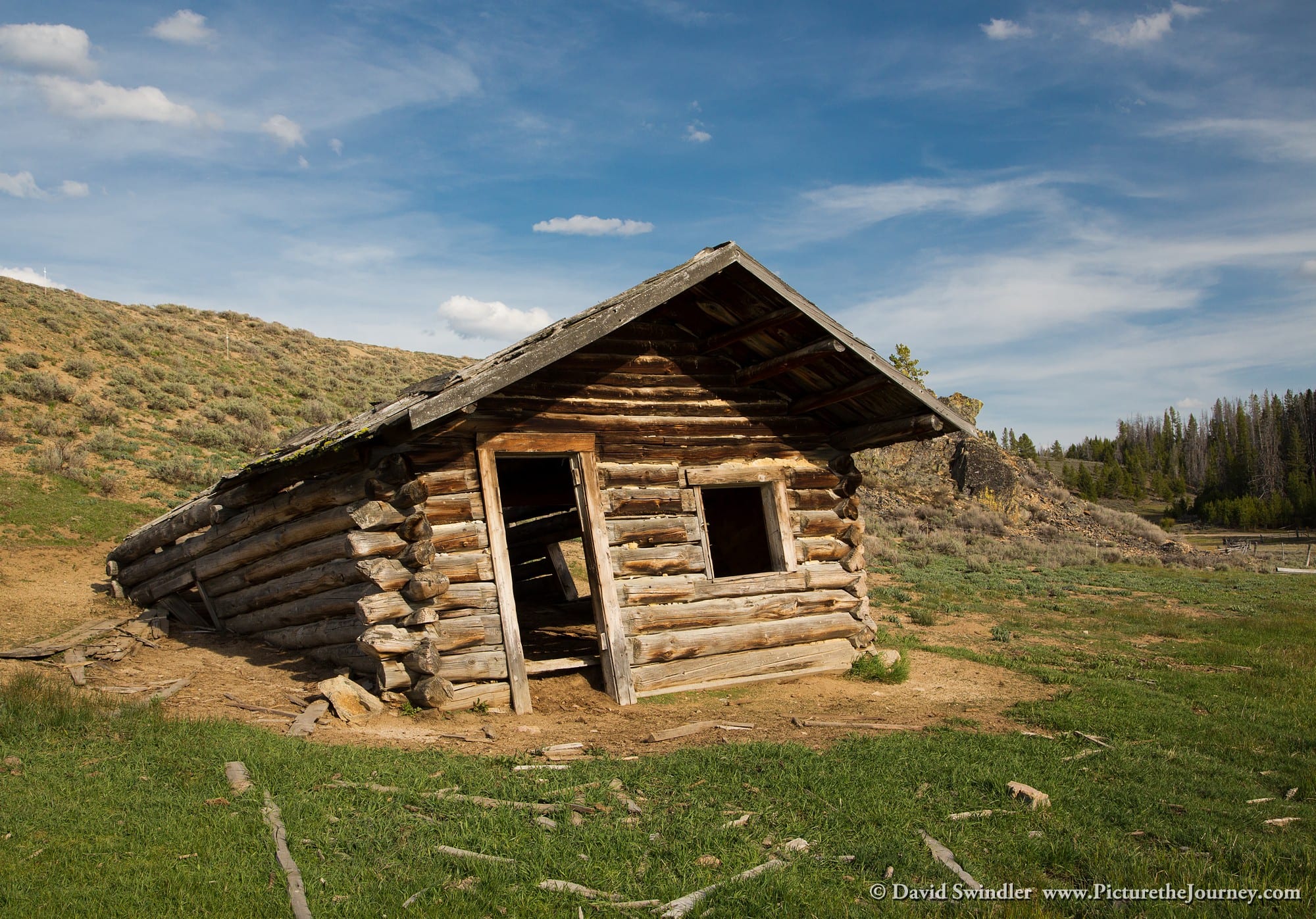 About a mile off the highway on Basin Butte Road, look for this little cabin on the left side of the road. To get there, you have to exercise some creativity since there are a number of creeks and fences in the way. It’s worth getting out to see, especially with how the Earth is slowing consuming the structure. 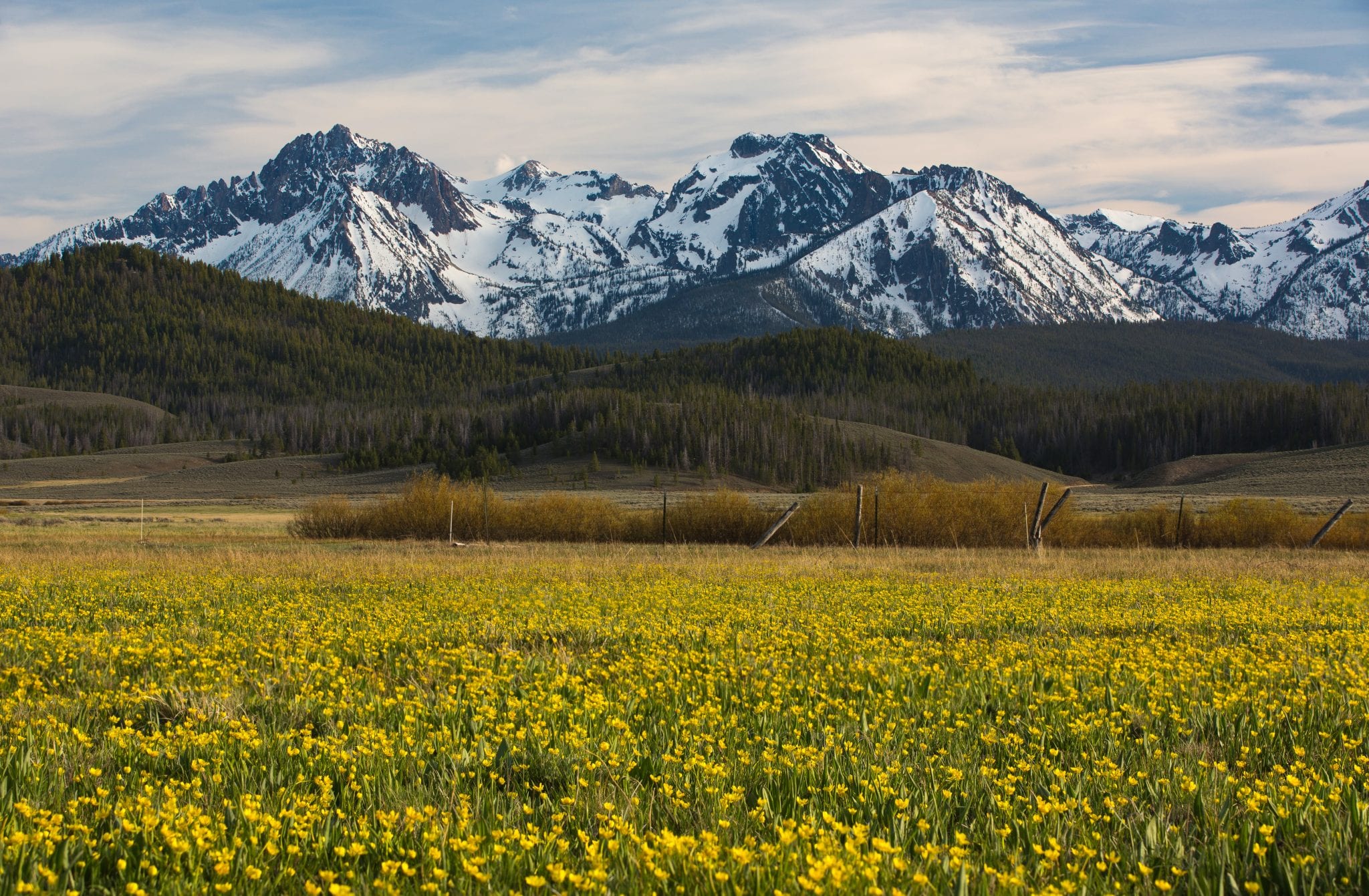 In early May, you’re a little too early for most wildflowers. However, I did find some small yellow flowers growing in the meadows alongside the road. To get the shot on the right, I had to get very low to the ground and use a telephoto lens to get the mountains in their proper perspective. Since my depth-of-field was limited by the focal length, I shot one image focused on the foreground flowers and another focused on the background mountains and combined them in post-processing. 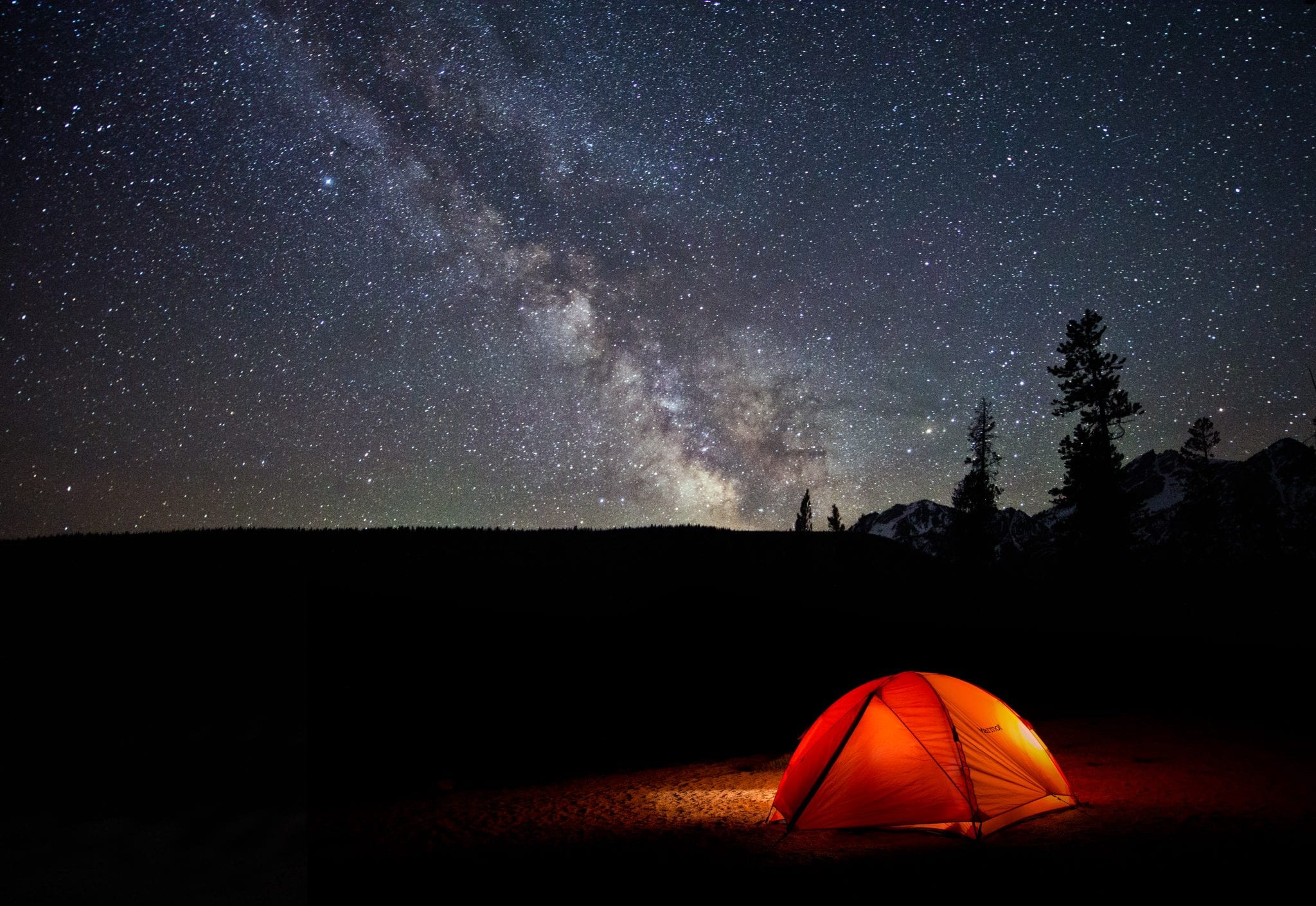 Stanley Lake is another great place to visit on the North Side of the Sawtooths. If you’re going early in the season, it’s best to call the ranger station first to see if the road is open or not. If it is, you can drive right up to the lake and camp next to the lakeshore. Here’s a shot I took of the Milky Way from my campsite near the edge of the lake on the left. It took a bit of trial and error to get the right amount of light inside the tent. 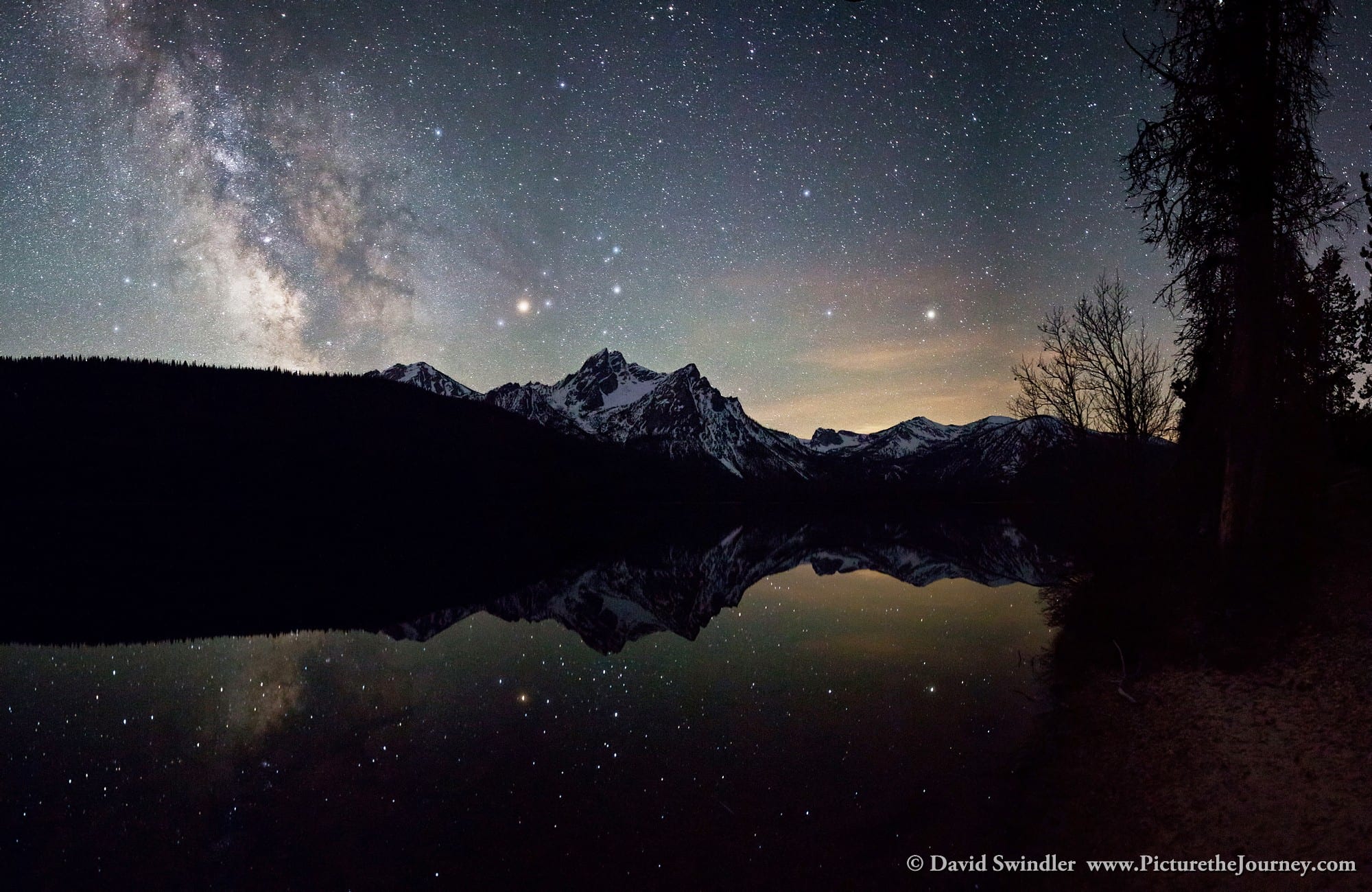 Since I shot this at ISO6400, it didn’t take much light to illuminate the tent. After that I hiked to the far side of the lake and photographed the Milky Way with McGown Peak in the background. The lake was so still that I got really good reflections of stars in the water.

Morning is a great time to photograph Stanley Lake since the winds are usually calm. Look for a good foreground object to frame things with and enjoy the reflections! There’s usually plenty of fallen trees near the shore (above). Another good photo location is found just about 3 miles from Stanley while driving eastbound on Hwy 21.

Look for a bunch of old rustic fences on the right side of the road near a turnout. In the Spring, there usually aren’t any cattle around which makes the fence lines easier to shoot. For the shot on the left, I used a telephoto lens to give proper perspective to Mt Heyburn in the background. Also be on the lookout for willows. They turn a nice shade of red which can add some snappy color to images (right). 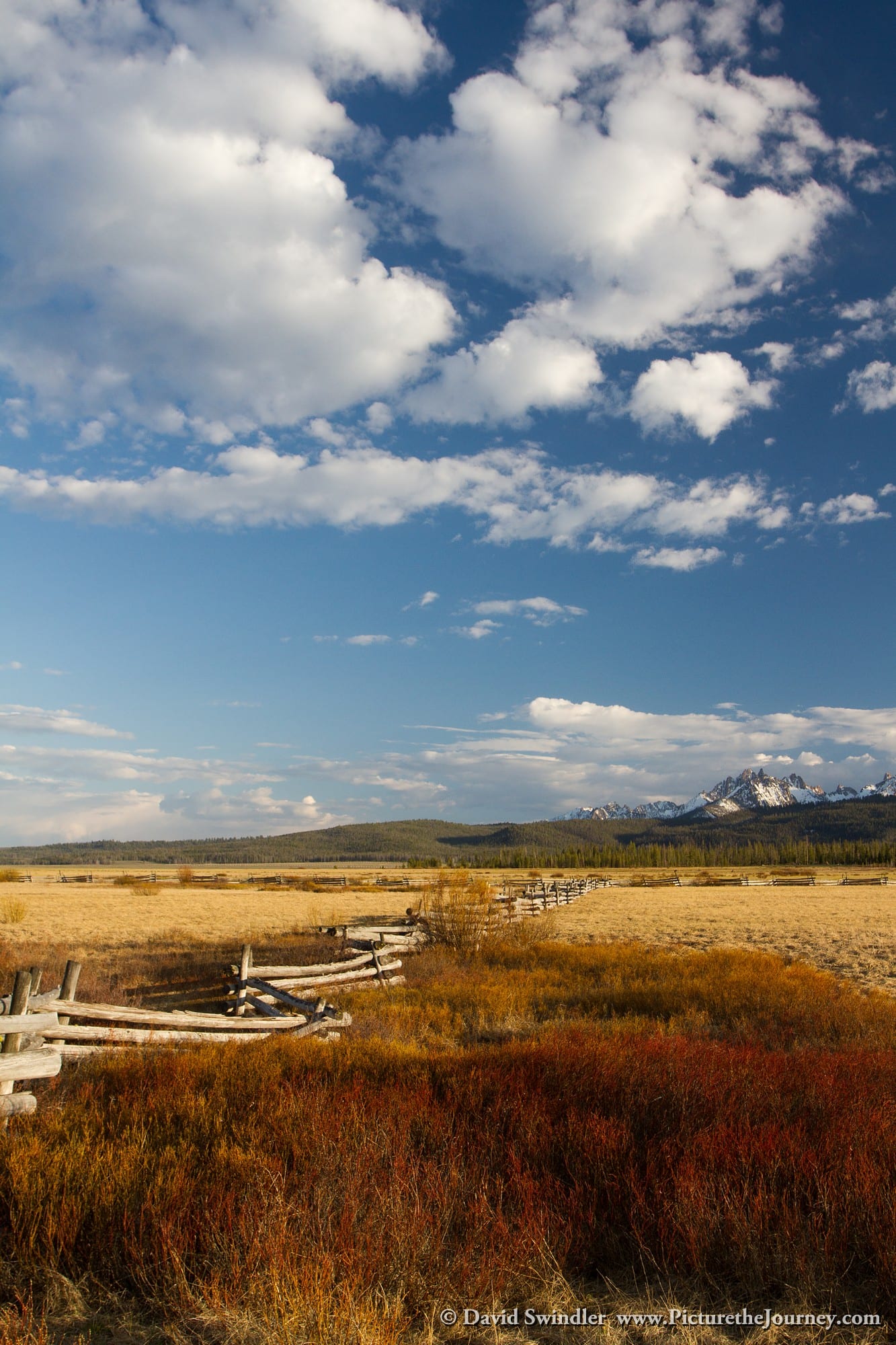 After Stanley Lake, I decided to try my luck getting up to Sawtooth Lake. The shortest way to get there is via the Iron Creek Trailhead. Since it was early in the season, I couldn’t drive all the way to the trailhead due to fallen trees. This added another mile to the hike each way. The trail was clear of snow for the first 3 miles. 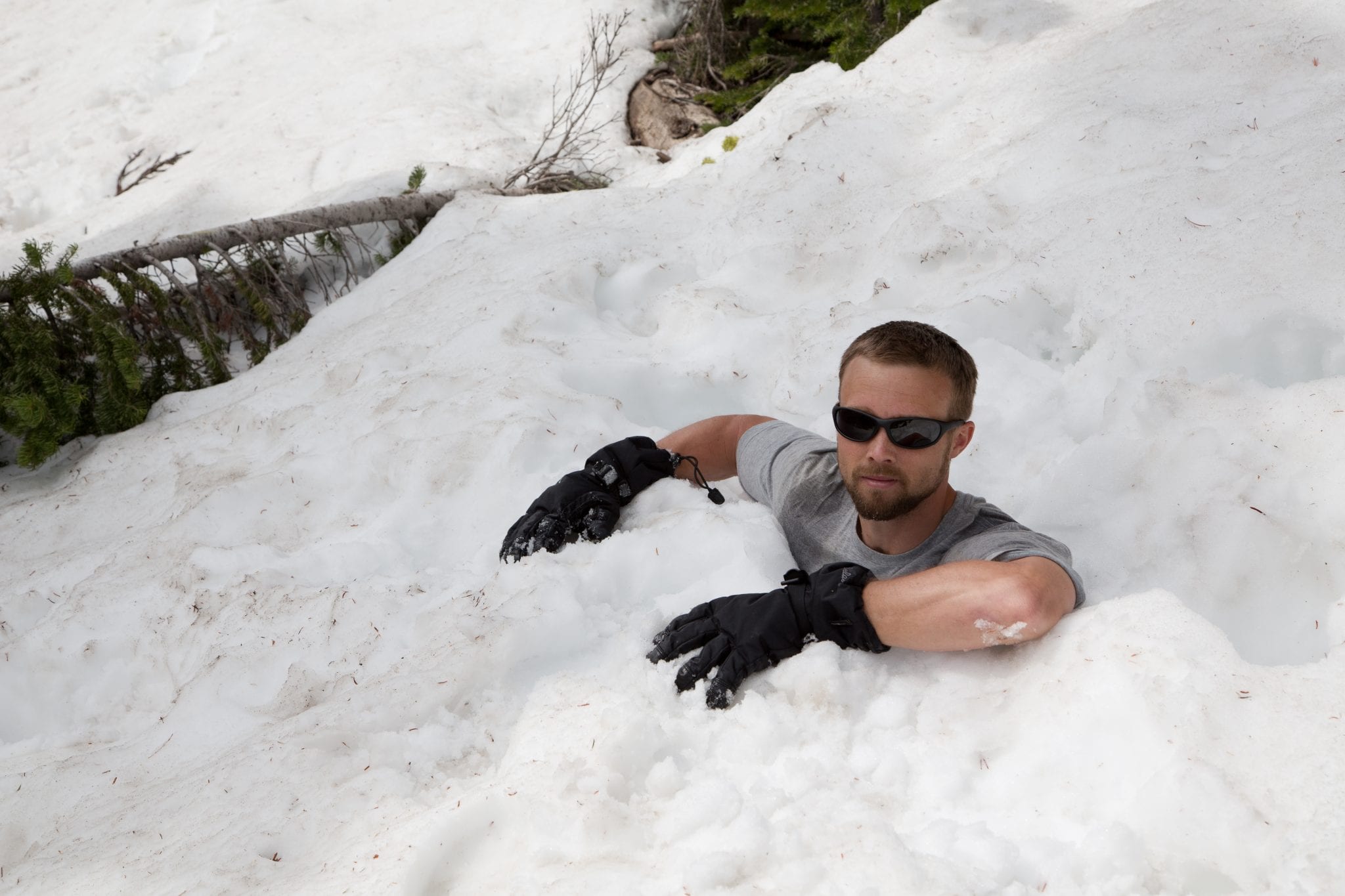 However, once I crossed the Iron Creek footbridge, everything was covered in snow. At this point I realized I should have packed some snowshoes. I ended up postholing all the way up to the lake (i.e. randomly sinking in). From time to time, I’d even sink in chest deep in particularly soft snow. With a full backpack on, it was pretty tough getting back out. Needless to say, it was a workout getting up there. Despite the difficulty, it was fun to overnight at Sawtooth Lake while it was still iced over. At the outlet, there was some interesting turquoise blue slush. I tried walking down there to get a better vantage point and ended up with wet boots because I got too close (right). 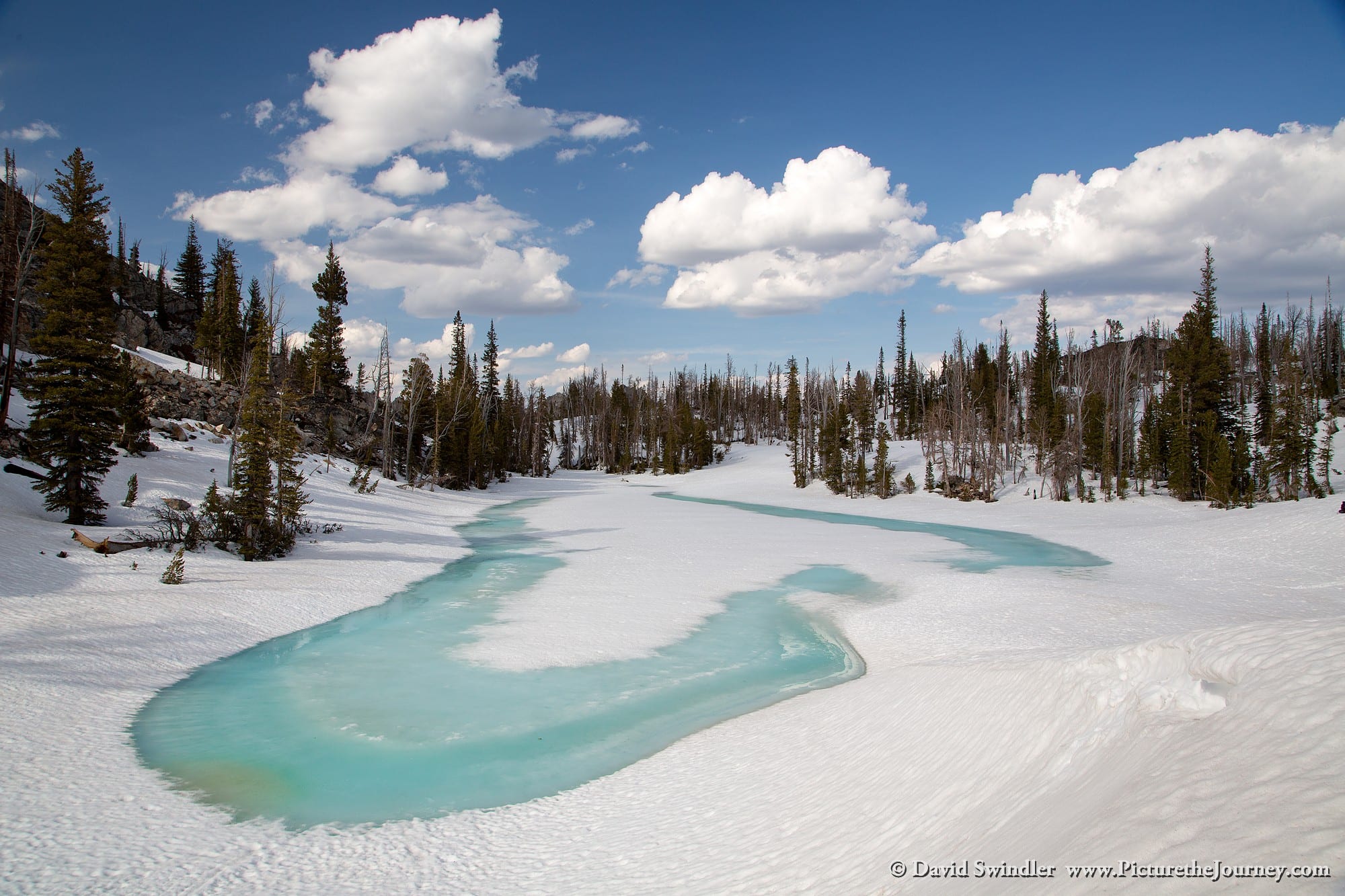 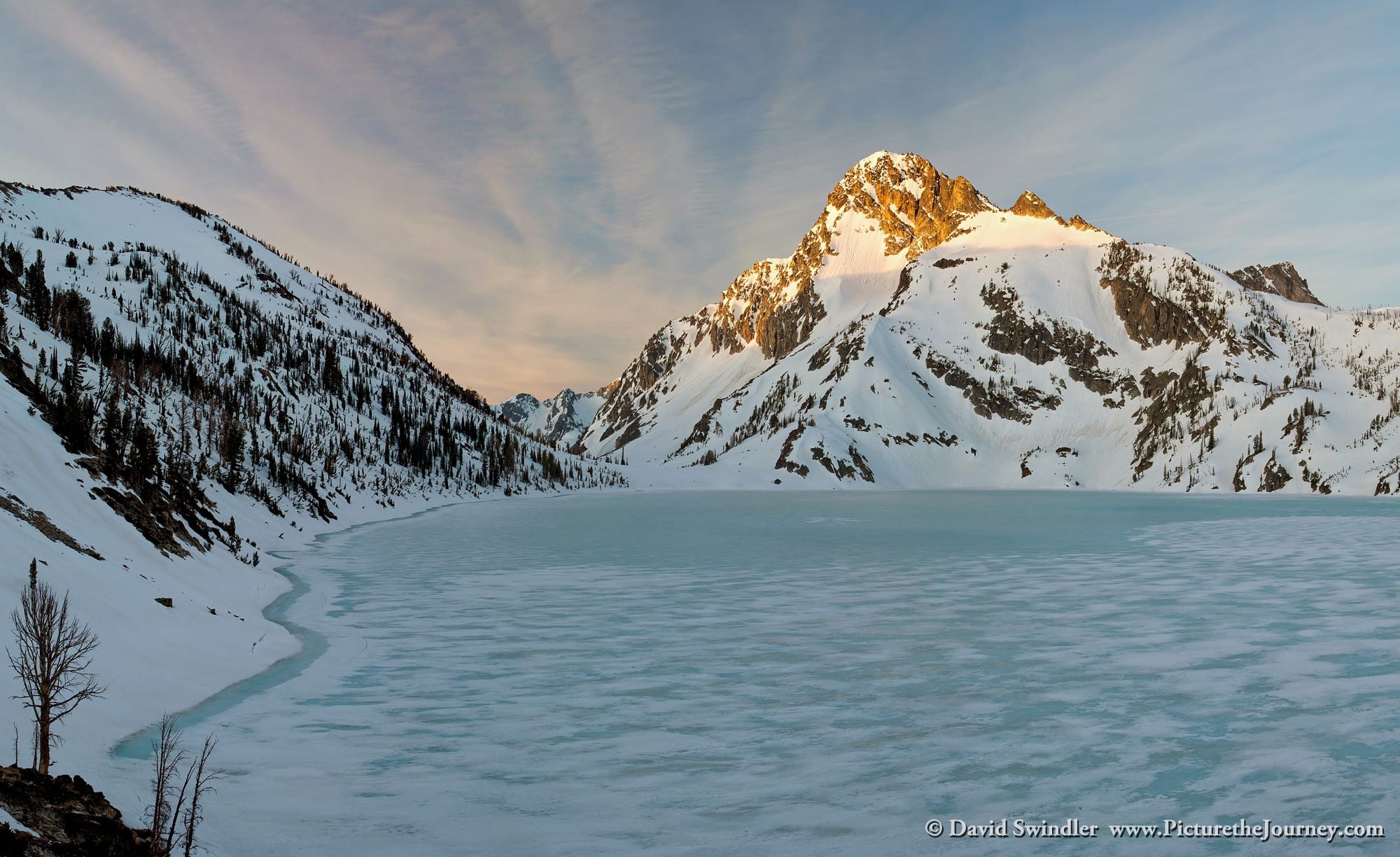 I was hoping to shoot the Milky Way here at Sawtooth Lake, but unfortunately it was hazy that night and I didn’t see many stars. The next morning, there was some nice diffuse light to photograph Sawtooth Lake with Mt Reagan in the background. 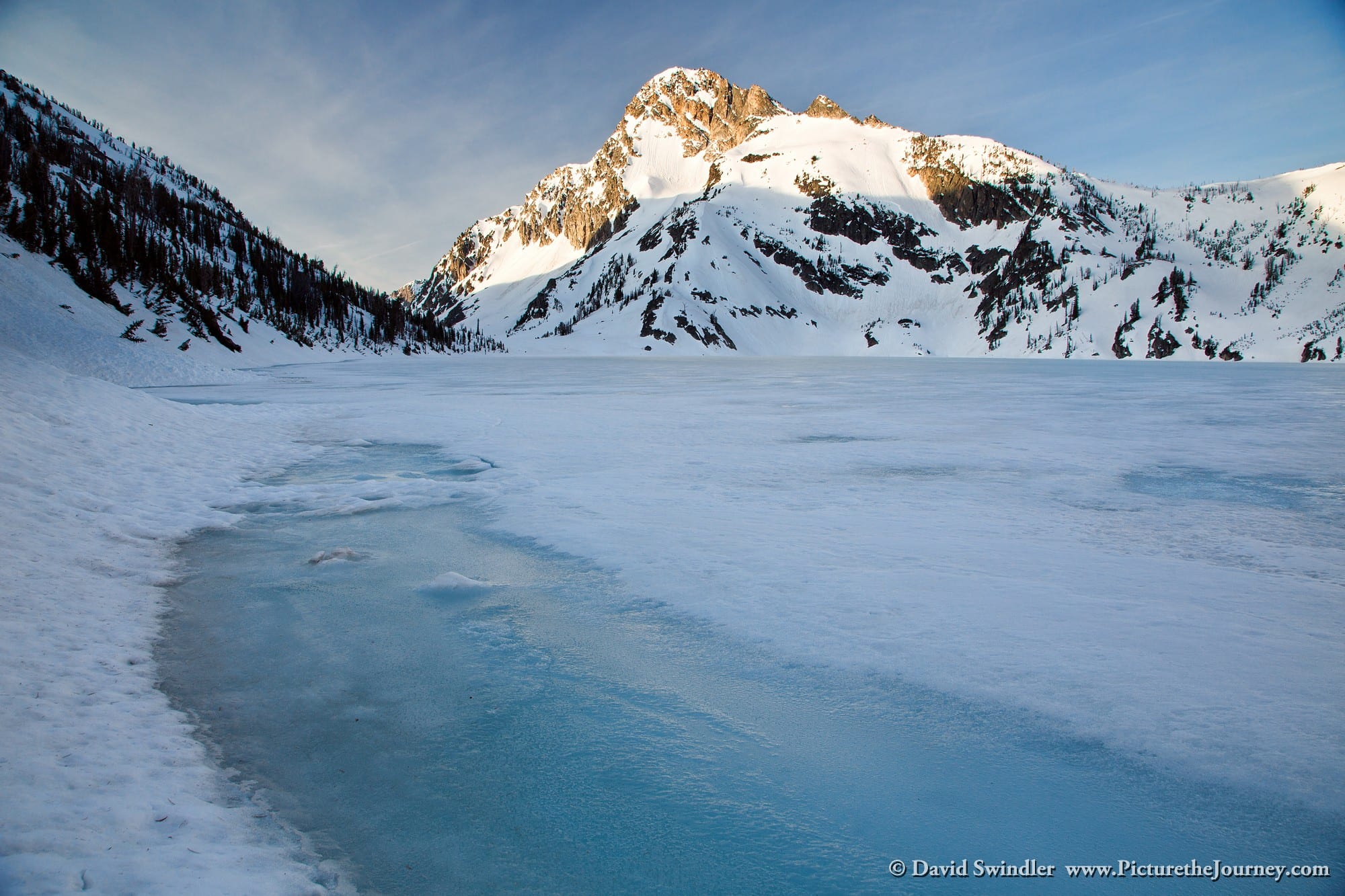 The spotty patches of snow added nice texture to the image. I also walked to the far end of the lake and got some interesting close-up shots with the slushy blue ice (right).

In conclusion, this is just a sample sample of the adventure that awaits in the Sawtooths during the Spring months. The image below is a nice sunset from Basin Butte Road. I had already packed up my stuff and was heading back to the car when I happened to look back over my shoulder and saw this great color developing. I quickly ran back and got the shot before it fizzled. Happy exploring! 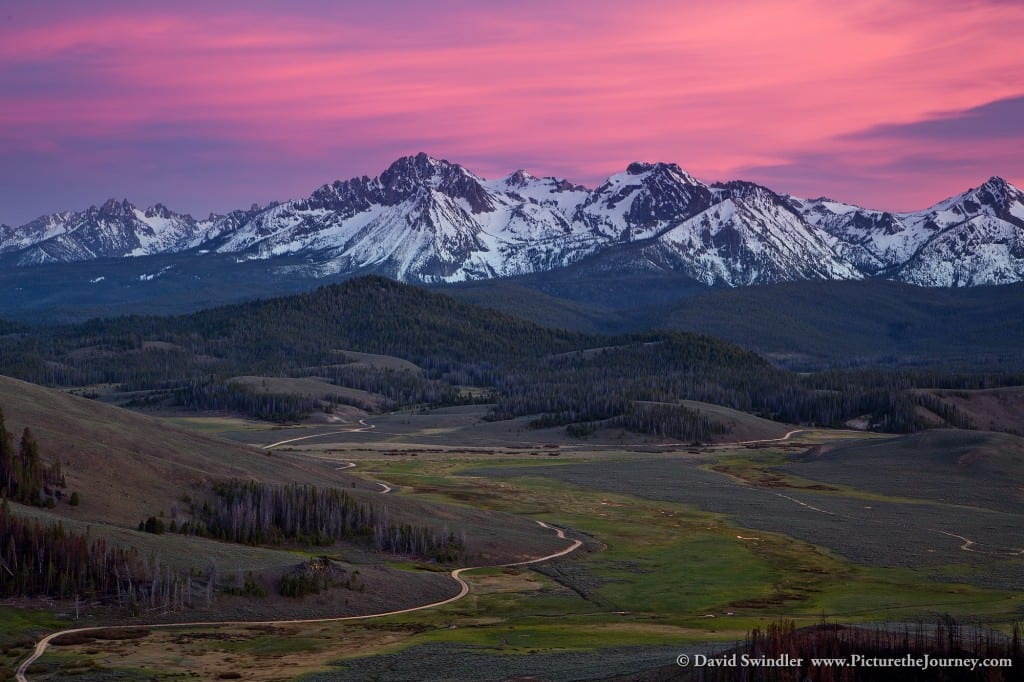