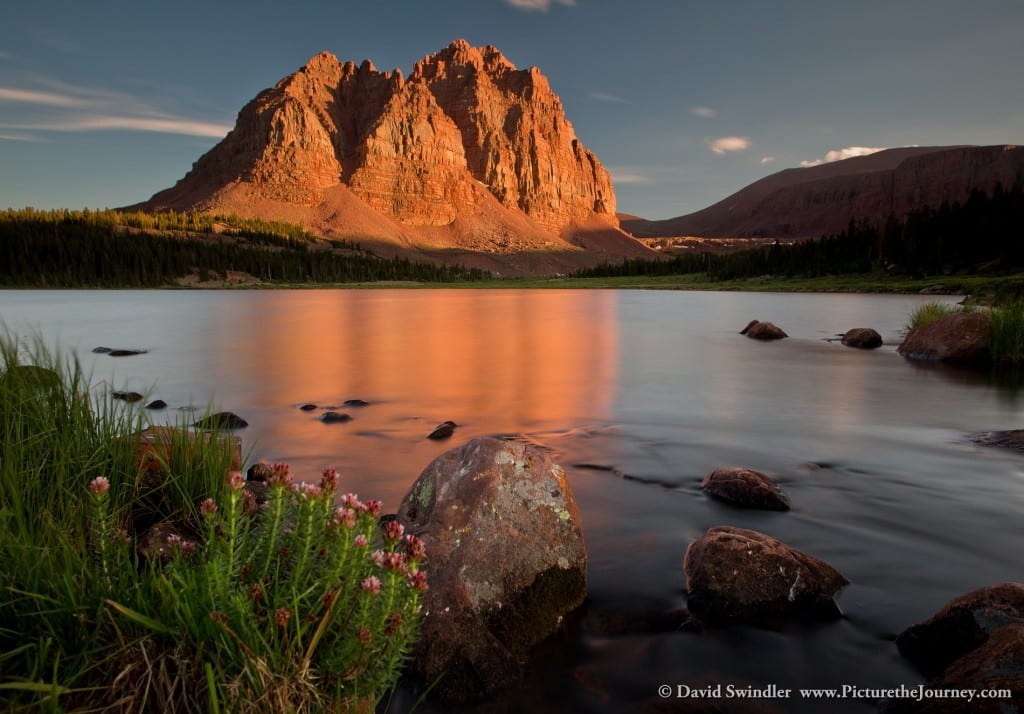 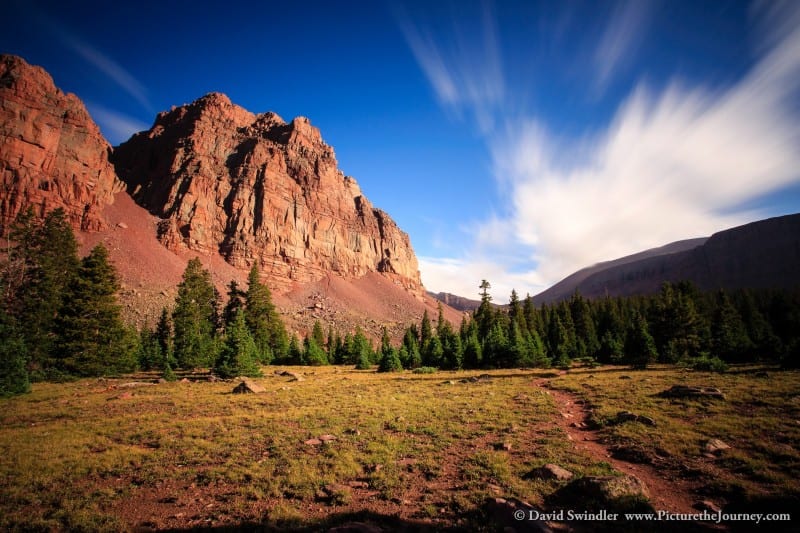 With springtime in the air, now is the time to start planning summer backpacking trips! One location I would highly recommend is Utah’s High Uinta Wilderness. Located just south of the Wyoming border in Eastern Utah, this spectacular backcountry area stretches nearly 60 miles east to west and is home to Utah’s highest peak. The famed Highline Trail runs along the backbone for 96-miles and is popular with hard core trekkers. In this article, I will focus on the Red Castle Lakes area, primarily because due to its photographic potential. Red Castle can be reached via the China Meadows Trailhead (see map below). It can be done either as an out-and-back (red path), or you can combine it with the Highline Trail for a nice loop (purple path). From China Meadows, it’s a 10 mile hike to the lower lake. The grade is gentle and the trail is easy to follow. Most of the hike is pretty non-descript until you get to the last mile where you’re treated to awesome views of Lower Red Castle Peak. 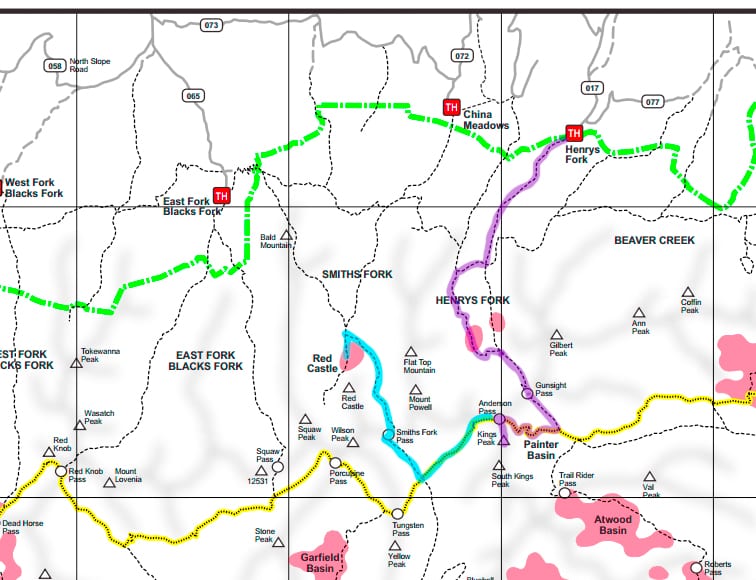 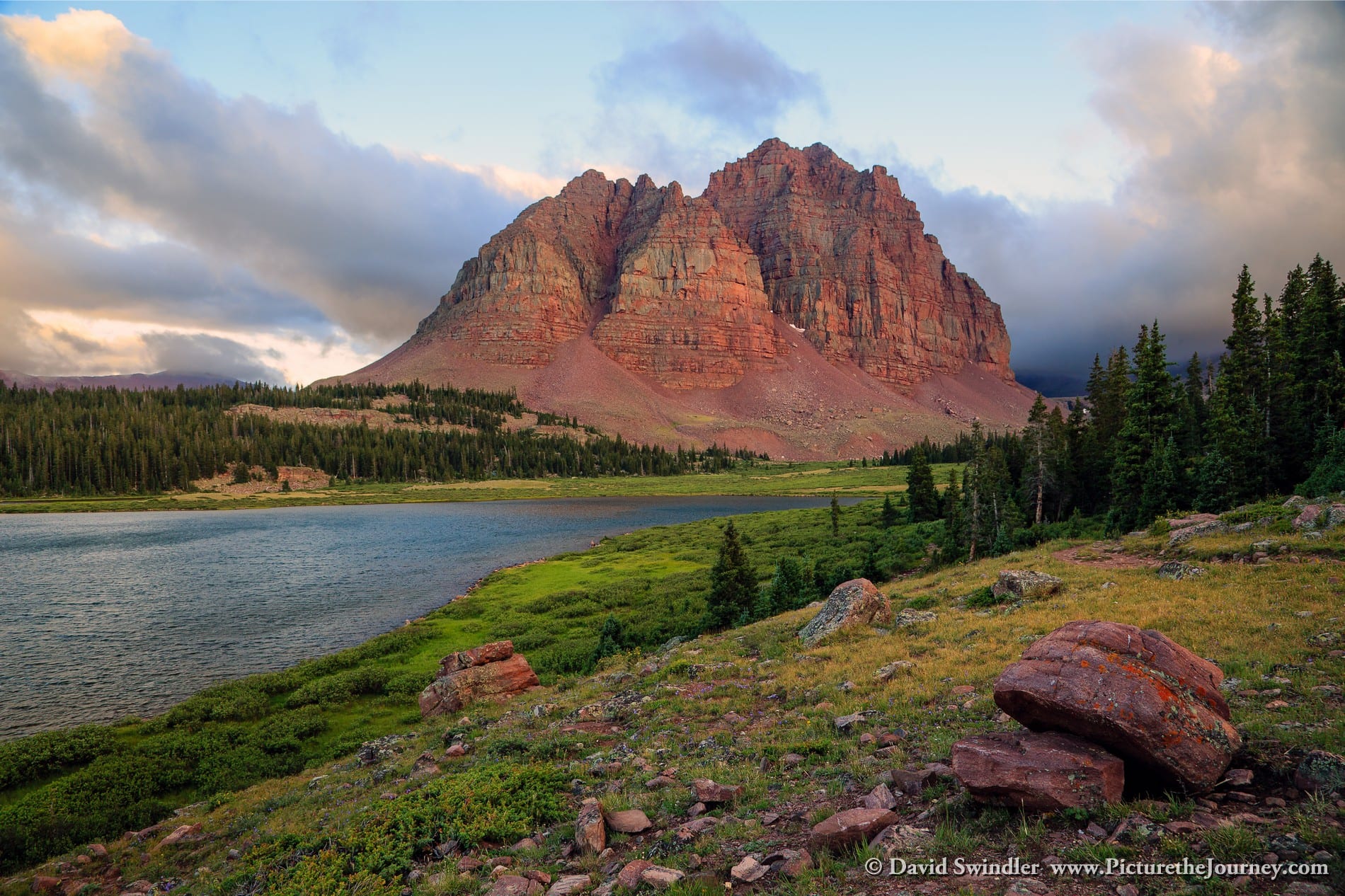 I recommend camping at Lower Red Castle Lake and staying at least two nights. This will give you ample time to explore the upper lakes basin. There are quite a few good campsites to choose from with the best sites out past the southern end of the lake. I went to Red Castle Lakes the first week of August. Most of the snow has melted by then and the wildflowers are blooming. However, you do have to watch out for afternoon thunderstorms – be prepared and bring good rain gear. Also, it tends to be very windy here. Sunset at Lower Red Castle Lake can be stunning. Our first evening, the wind was blowing furiously. The ripples in the lake were destroying any attempt at a reflection, so I decided to put on my 10-stop ND filter and do a long exposure. The result can be seen below. the long exposure smoothed out the ripples and created a nice diffuse reflection of the orange-colored peak. You can see slight movement in the foreground plants. 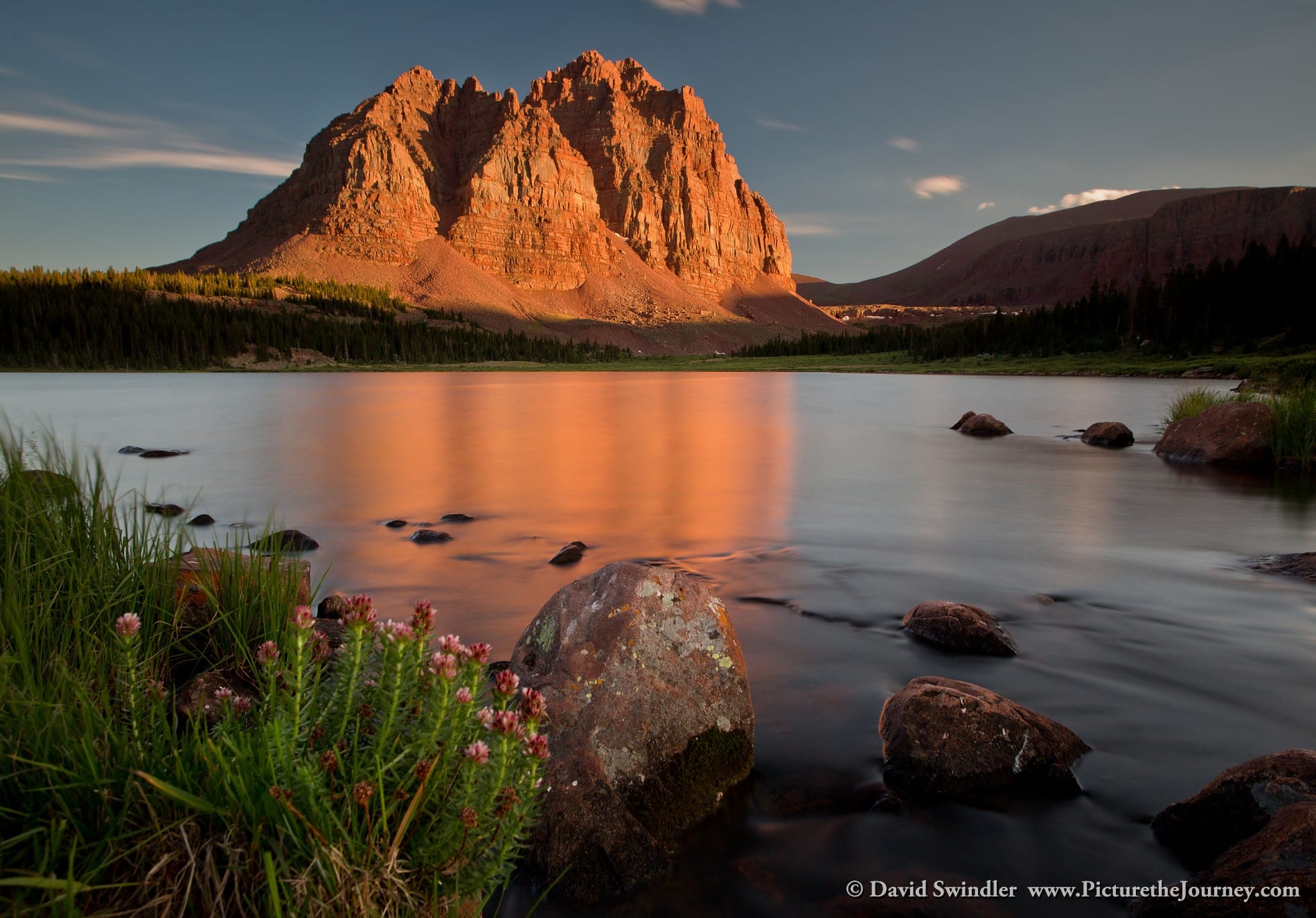 With clear skies that night, I ventured out after dark to get some Milky Way shots. Since the bright part of the Milky Way appears to the south, I went to the north end of the lake. To get the shot below, I combined two different exposures. The first exposure was 25-sec for the stars (any longer and they would have blurred). The second exposure was 3-minutes to help brighten the foreground. Without this longer exposure, the foreground would have been nearly black. 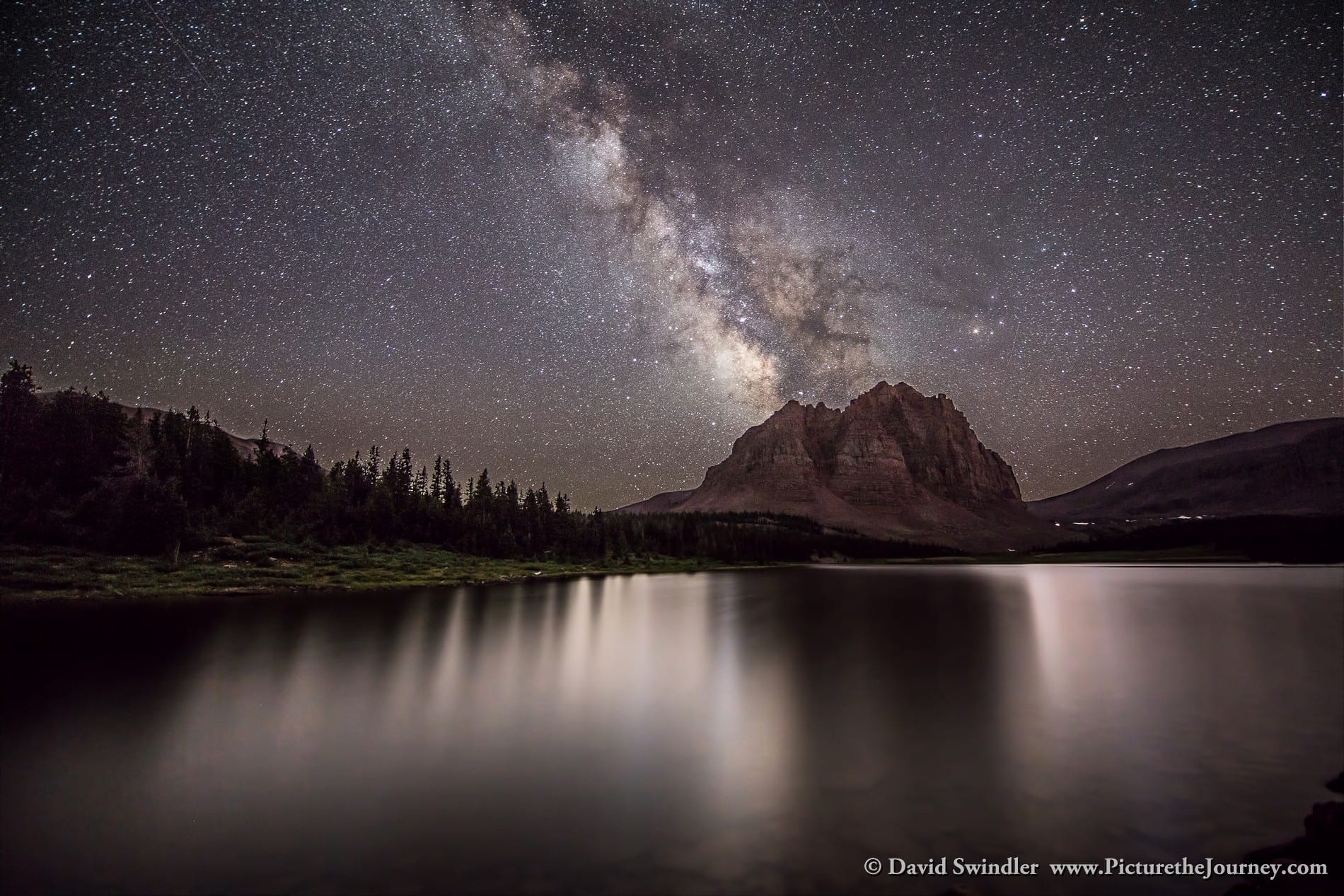 The next morning the wind was still blowing hard but I got some nice color in the clouds. By using a 3-stop ND, I took advantage of the wind and got some streaks patterns in the lake that made the shot more dynamic. Just in case you’re wondering, yes – the mountain really is that red in the right light! 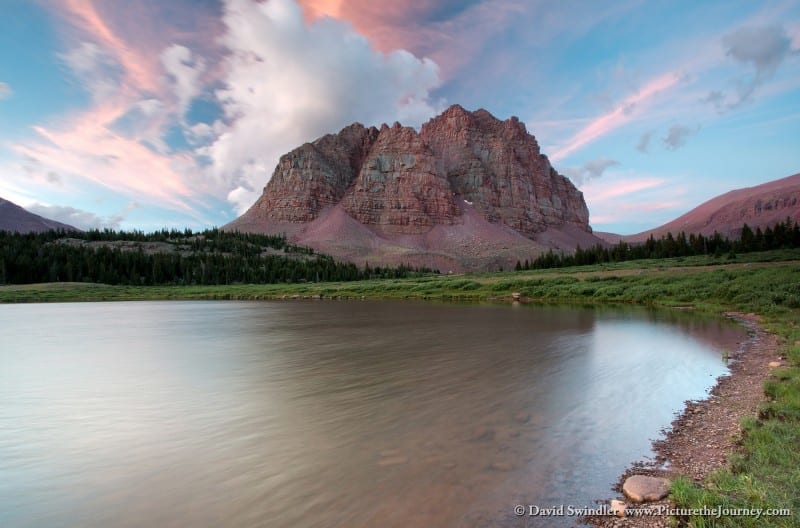 After a good breakfast, we headed up the trail to the Upper Lakes Basin. It’s a 6-mile round trip hike to the upper lake and back. However, I recommend going past the upper lake to the saddle you see back behind it. This will add a few extra miles but is worth it for the great views it affords. The wildflowers around Upper Red Castle Lake were awesome. The fields were chock full of Asters and Indian Paintbrush. Here are a couple wildflower shots I took in this area: 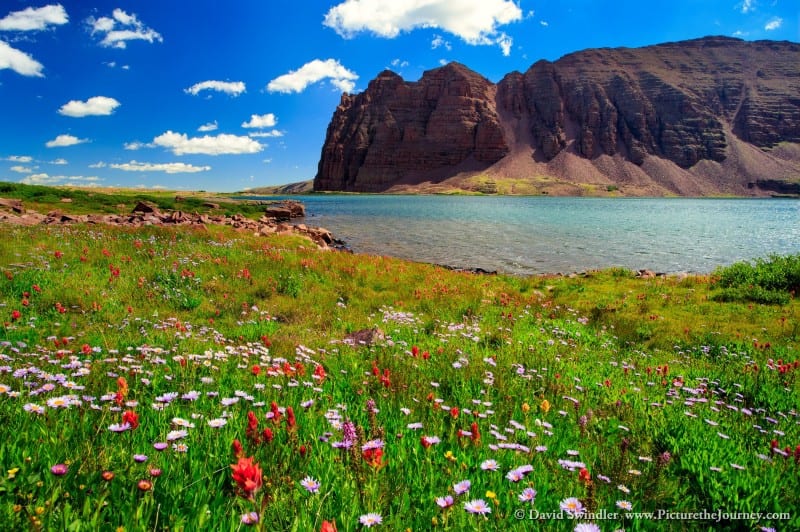 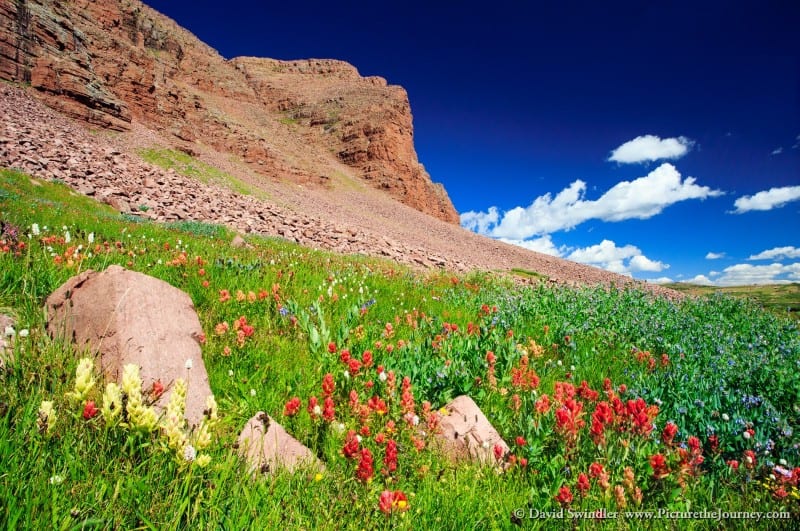 Continuing on up past Upper Red Castle Lake, we were soon reached another lake nestled in the rocks. The red rocks surrounding this lake made a nice foreground for the shot below. 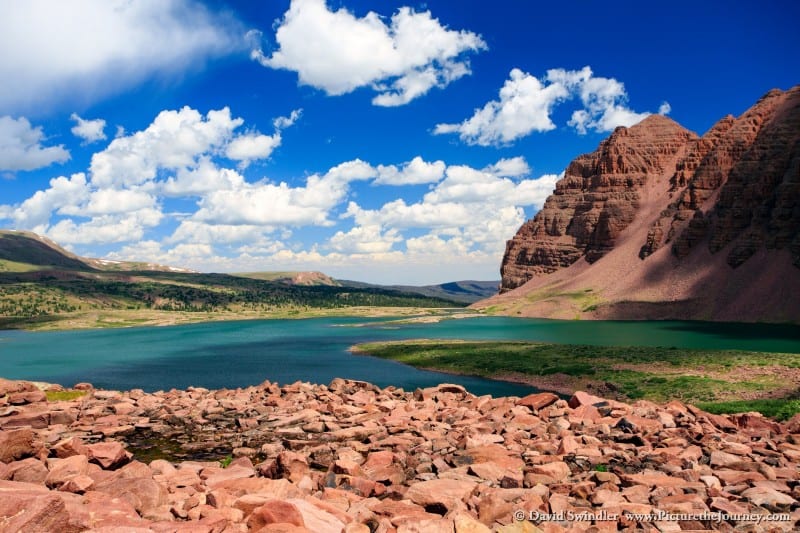 The next shot is a panoramic image from the Saddle. Here, you can see the two Upper Red Castle Lakes. Lower Red Castle Lake can be seen furthest back. The giant U-shaped glacial valleys in the High Uintas are impressive. Since you are up at high elevation, it’s easy to get above the tree line to enjoy these wonderful vistas.

While eating lunch on the saddle, we could hear the rumble of distant thunder and knew we needed to get back down. Soon enough, it started raining. By the time we got back to camp, the storm was started to abate. Suddenly, a rainbow appeared right outside our camp. I grabbed my camera and ran out to get some shots. The shot below was my favorite since it showed the full arc of the rainbow along with some nice sky contrast. 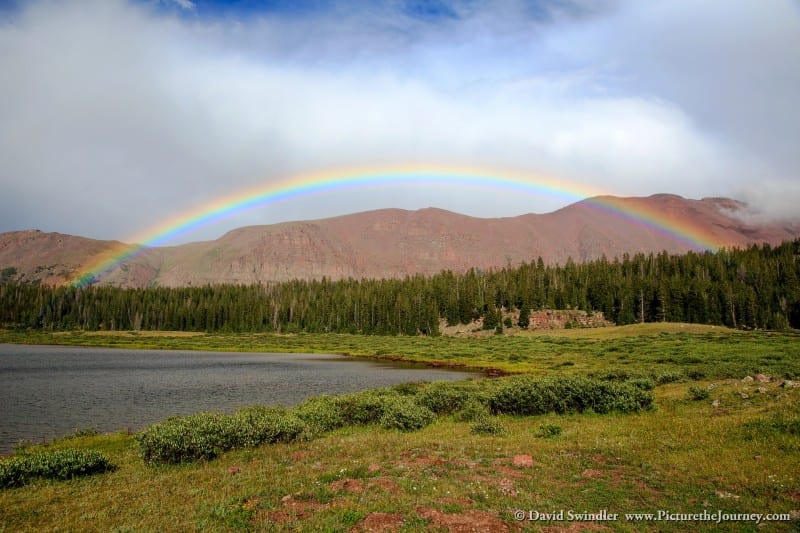 After the storm, the sky was filled with all sorts of nice clouds, so I ended up returning to Upper Red Castle Lake to get some evening shots. Unfortunately, the wind was absolutely furious up there! It was blowing so hard I could barely stand up, let alone get any pictures. I found one spot that was out of the wind and did a long exposure of Upper Red Castle below. Smoothing out the water definitely helped! 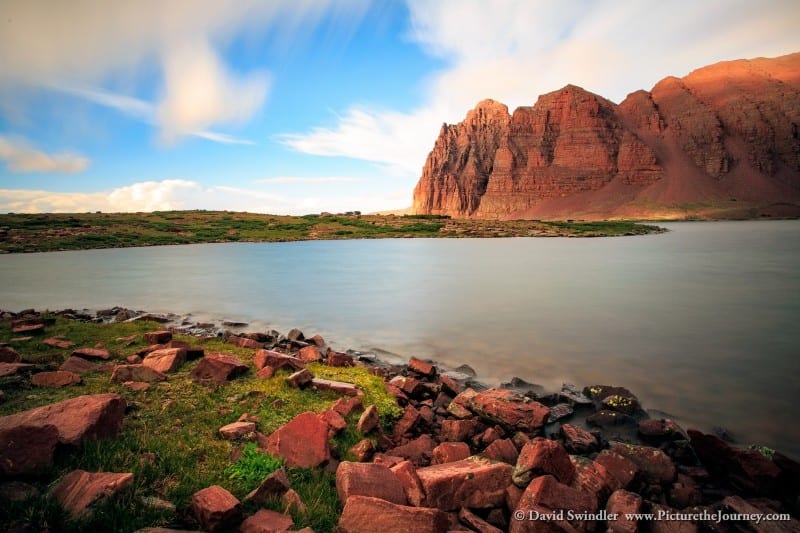 Returning to camp, I took one last sunset image of Lower Red Castle Lake. The sky didn’t light up as I had hoped, but the colors were still pretty nice overall. I liked how the clouds helped to frame the peak. 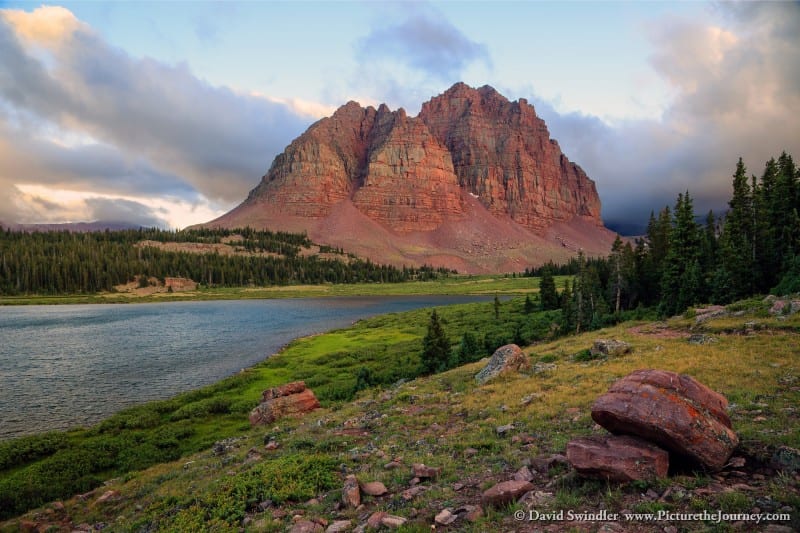 We got up early the next morning to continue our loop up over the Highline Trail. We had a great time at Red Castle Lakes and it was with regret that we had to leave such a beautiful place! 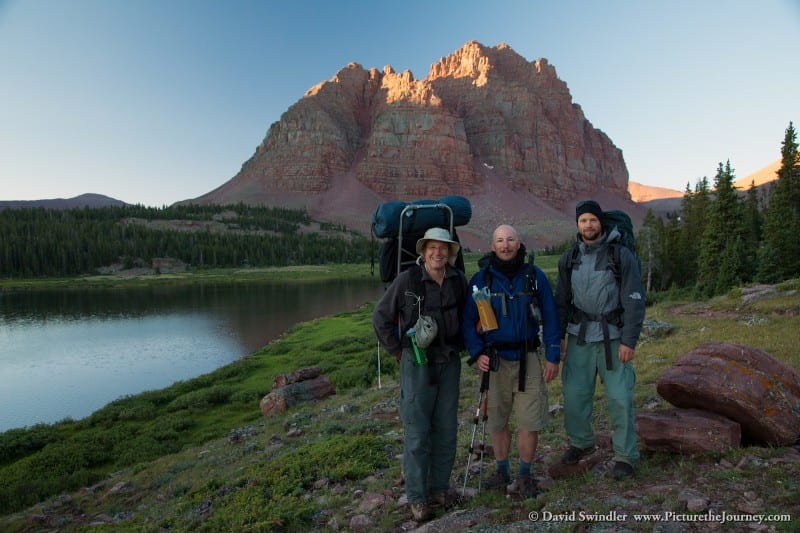 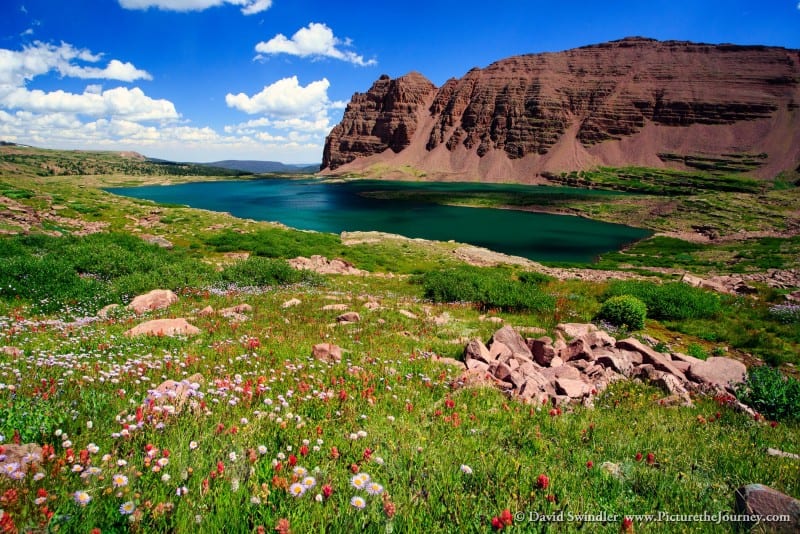 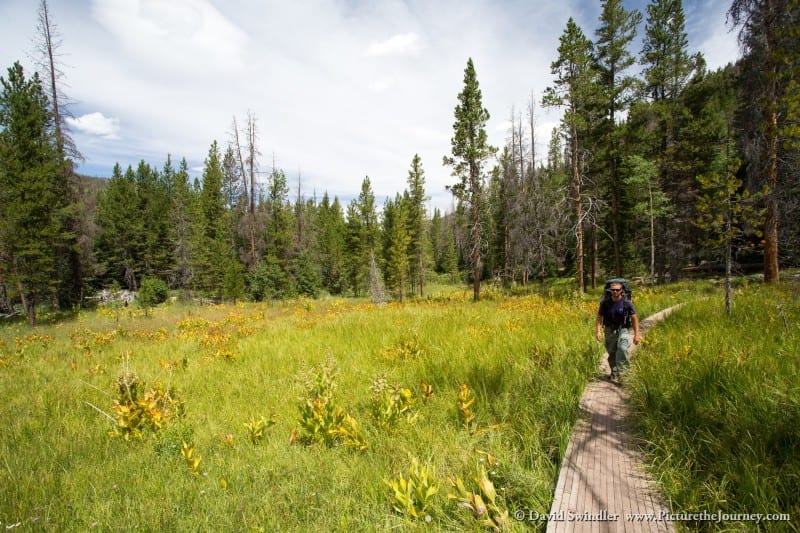 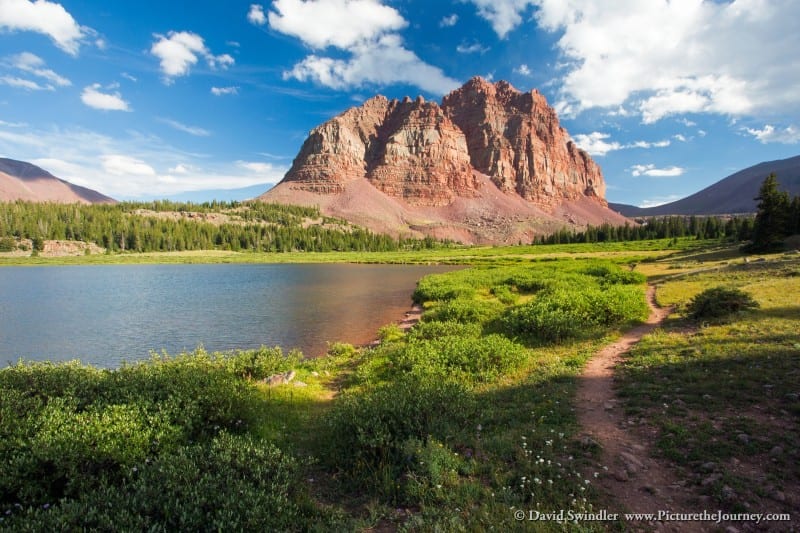 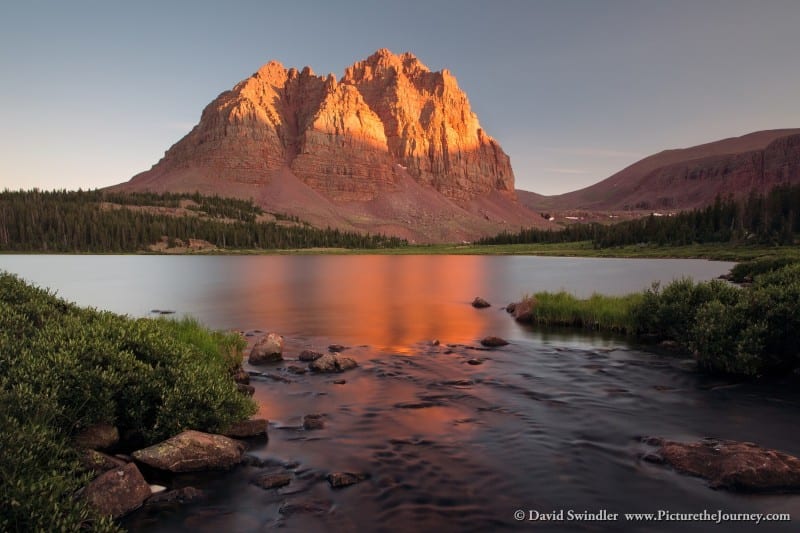 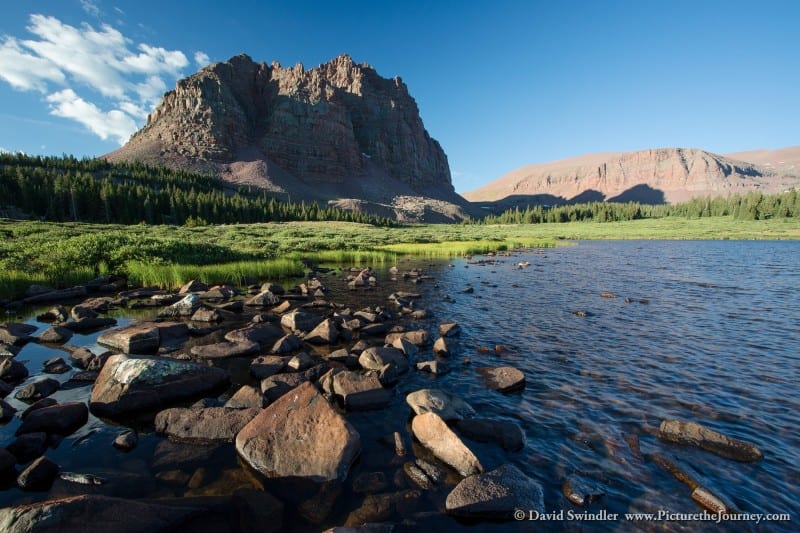 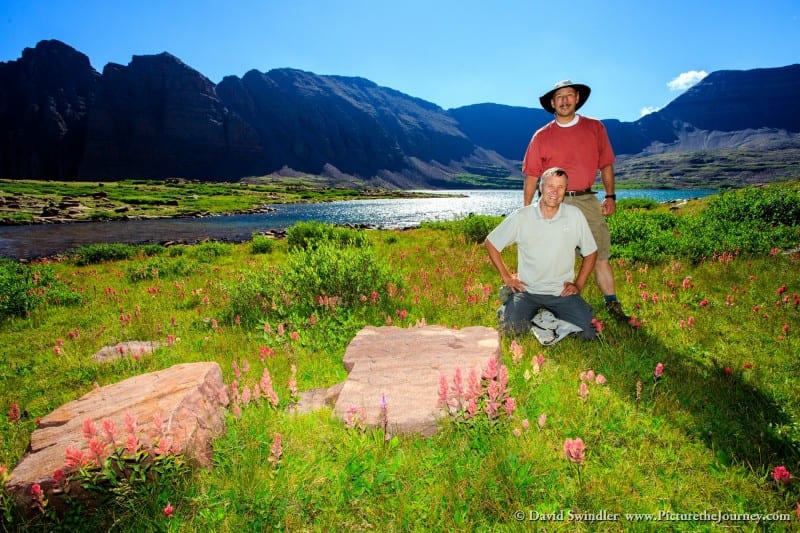 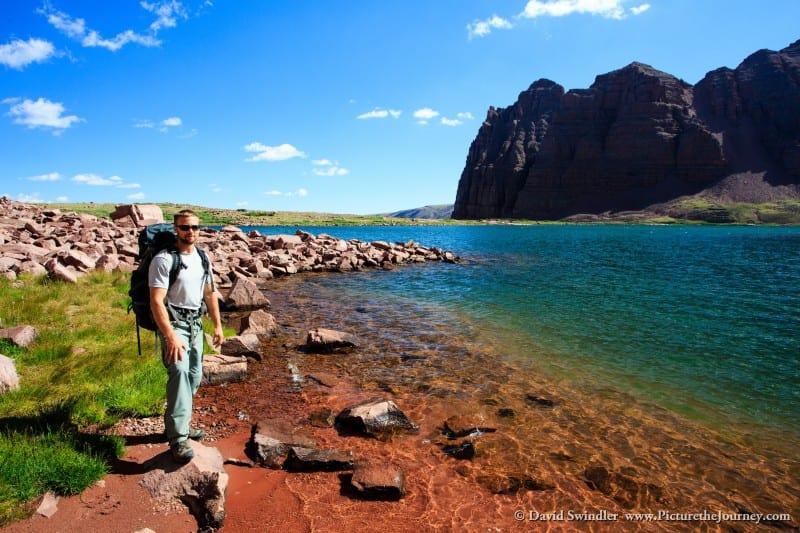 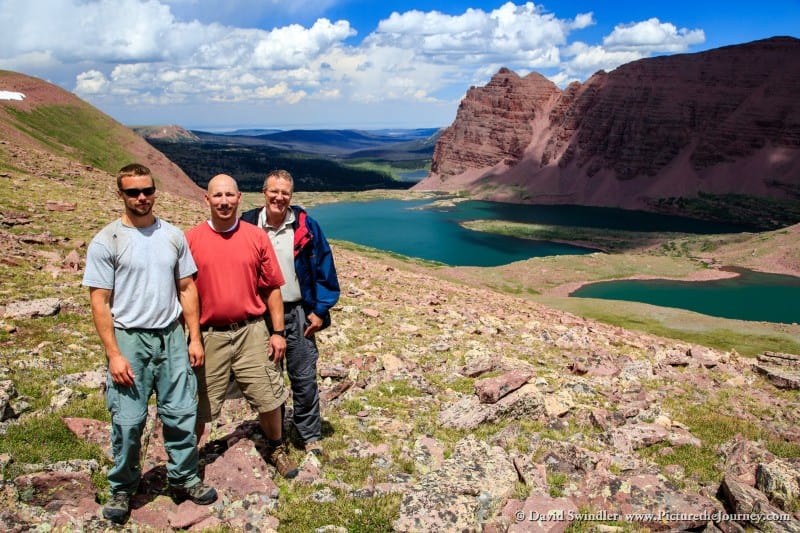