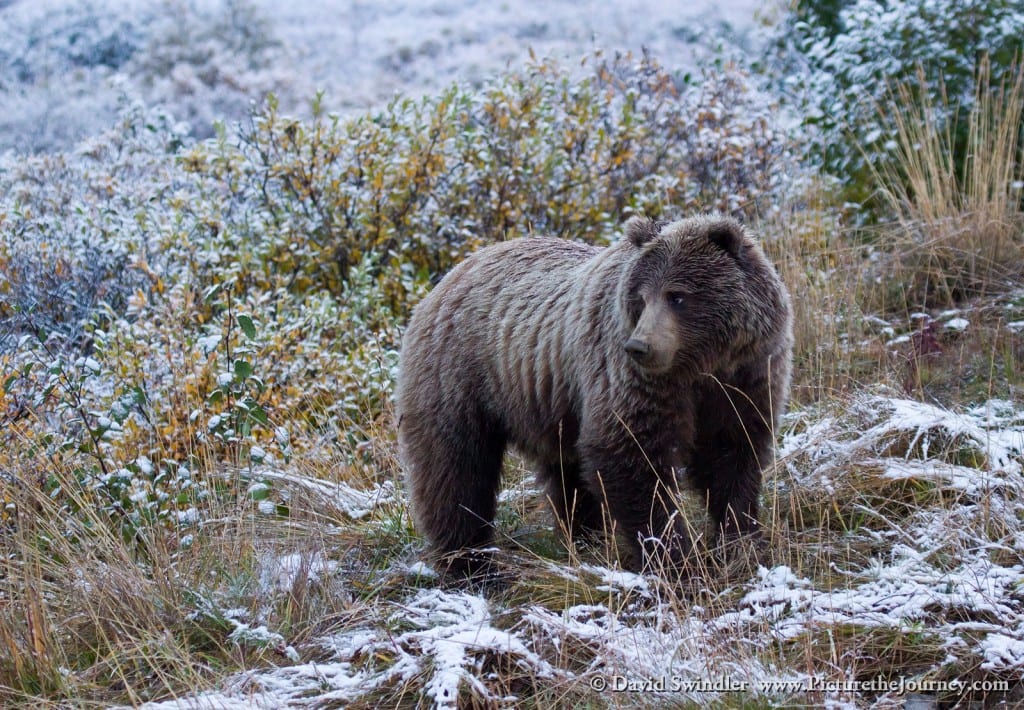 The wilds of Alaska have been a magnet for outdoor enthusiasts over the years. The diversity of scenery is truly staggering; wild rivers rage, endless craggy mountain peaks loom overhead, and rolling hills of tundra and trees beckon. Denali National Park is no exception. While the scenery is truly magnificent, it also boasts exceptional wildlife chock full of grizzly bears, caribou, dall sheep, moose, lnyx, and so forth. If you’re lucky to be there on a clear day, you’ll even get views of North America’s tallest peak. Since the most popular camp sites fill up quickly, I encourage you to start planning your Denali adventure as soon as possible. 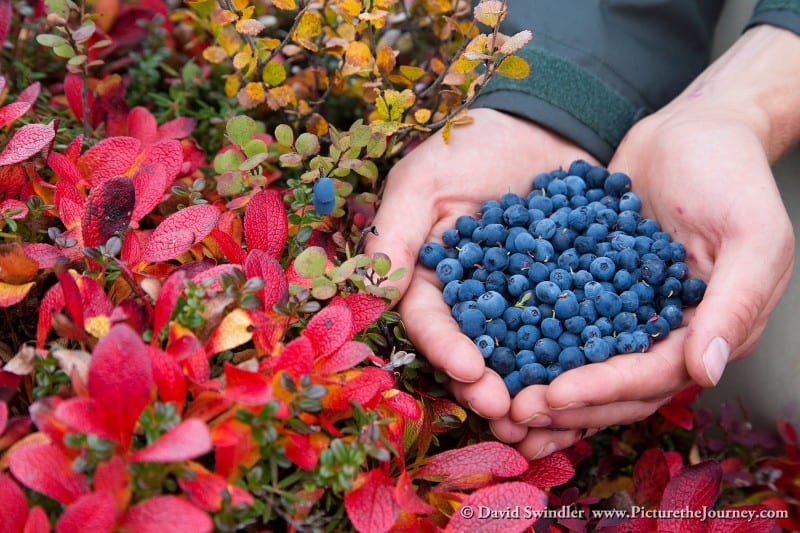 Most of Denali is classified as true backcountry. The 88-mile long park road provides the only vehicle access into the park. To get anywhere else, you’ll have to hike or hire a bush plane. But not to worry – there is plenty to see along the park road with lots of wildlife to spot to keep you busy for days. While all seasons have their pluses and minuses, I really like visiting in late summer and fall. During the last week of August and into the first couple weeks of Sept, the tundra turns vibrant colors and makes for impressive landscape photography. The tundra is also teeming with edible berries so you can always eat your fill of blueberries (see image above). I also like autumn since there aren’t any mosquitoes, the weather is relatively mild (plan for rain and snow), the wildlife is quite active, the caribou have lost their velvet, and you have a chance of seeing the Aurora Borealis on clear nights. 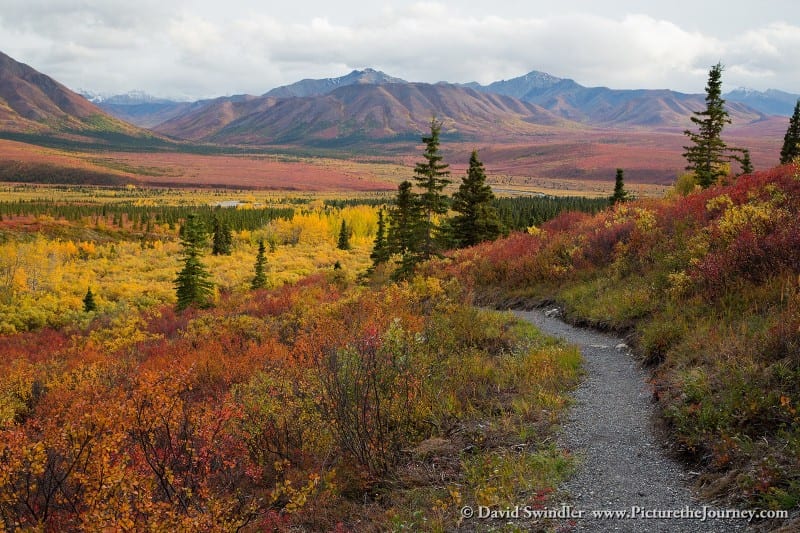 When visiting Denali, I recommend camping. It’s such a beautiful place, that you’ll want to spend a lot of time outdoors. Camping is quite affordable in the park and is considerably cheaper than the high-priced private lodges in the area. Private vehicles can drive the first 15 miles of the park road. Beyond that, you’ll need to get tickets on one of the many shuttle buses or win the lottery they hold each year for private vehicle permits. The shuttle buses are generally old school buses that drive to various stop points within the park. At first, I thought this arrangement would be inconvenient for the photographer. However, I was surprised by how well it worked. Everyone on the bus watches for wildlife and the driver stops whenever something of interest is sighted. You can roll down the windows and photograph right from the bus. The animals usually don’t get spooked by the buses since they see them so often. Thus, I was impressed by how close we could get to some of the animals. Plus, you end up seeing a lot more animals since everyone on the bus is watching for them. To make your camping and shuttle bus reservations, just visit www.reservedenali.com. 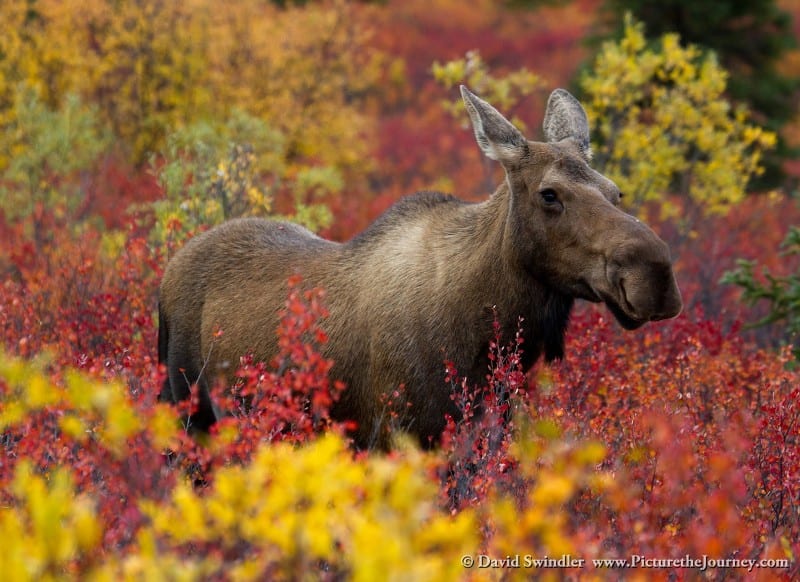 Since private vehicles are allowed up to mile 15, I recommend you spend at least one night at Savage River Campground. Nearby is one of the few hiking trails in the park called the Mountain View Trail. Here you’ll see impressive views of the tundra and surrounding peaks (the second image from the top is from this trail). In addition, between Savage River and the Park Entrance is a popular area for moose. Keep in mind that they’ll often close this area off to hiking to help protect the moose. However, you can drive this section as much as you like and soon enough you’ll get some moose sightings at close range, like the cow moose above surrounded by colorful dwarf birch shrubbery. 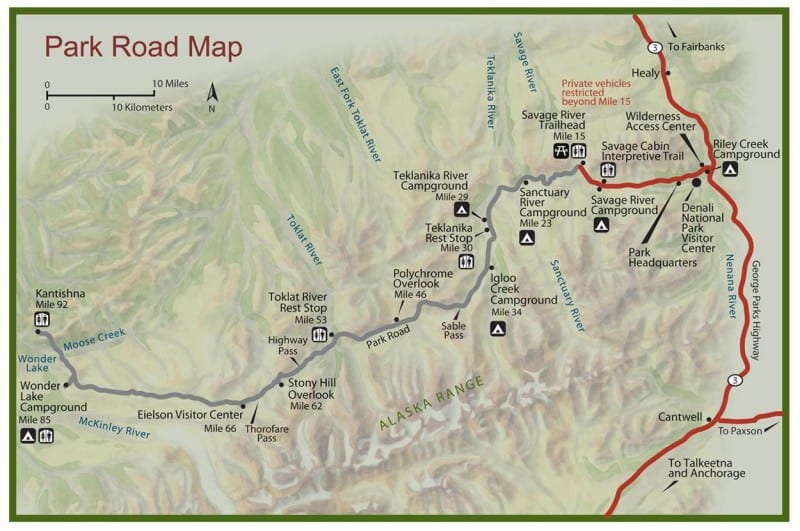 For the most affordable option, you can camp beyond Mile 15. If you camp multiple nights, you can take advantage of free rides on the shuttle buses. I like Wonder Lake campground since it’s the furthest into the park, has nice amenities, and has the best views of Mt. McKinley on clear days. Just reserve your campsites and camper bus in advance. Once you’re there, you can ride any shuttle bus that comes by and get off at any point you like (just tell the driver). As long as you don’t go back past mile 15, you can keep riding the buses as long as you’re camped at Wonder Lake. You can get out and hike wherever you like, just know that there aren’t any established trails and it’s backcountry style hiking. Although it was fun to hike and explore, we always saw the most wildlife while on the buses. 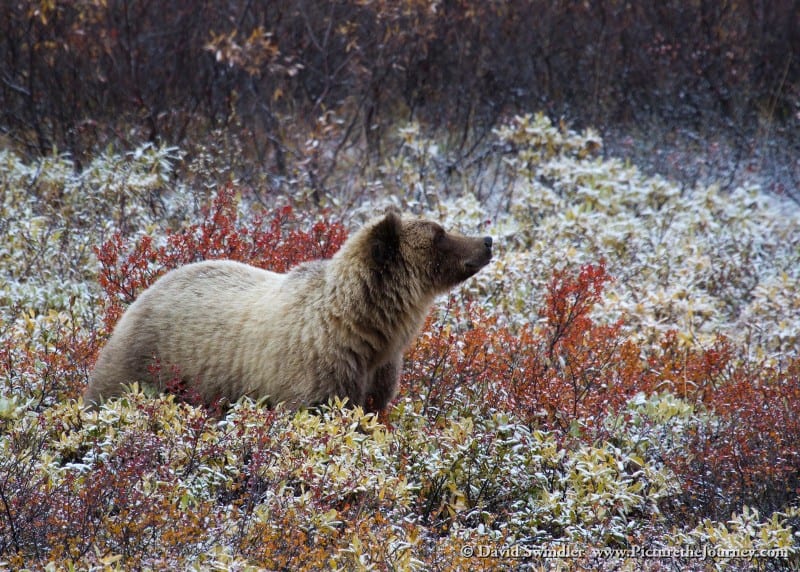 The buses almost always stop at Polychrome Pass with impressive views of the vast valley below. When I was there the weather was quite unsettled and it tended to be pretty windy and stormy. However, that produced some nice pictures such as the one below. It was difficult to take this shot since the wind kept blowing rain on my lens! 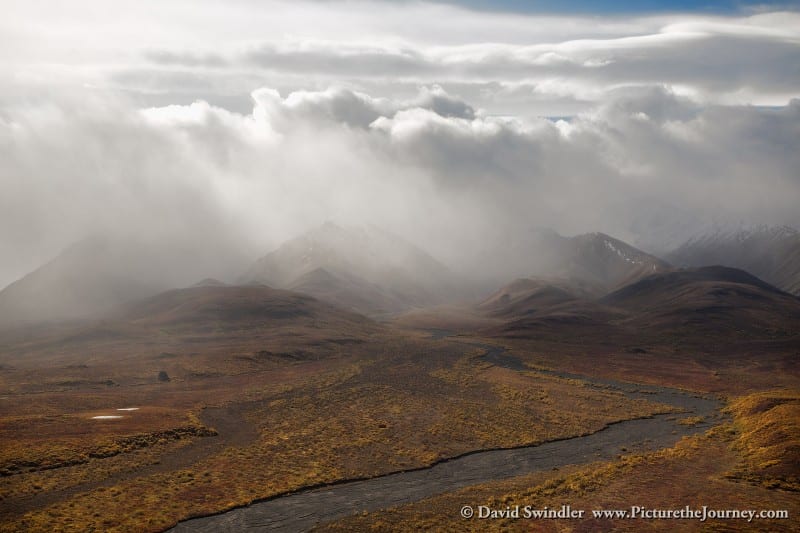 The number of caribou you’ll see is really hit or miss. When I was there, most of them had already migrated further west. The few we did see tended to be far away and difficult to photograph. The shot below was the best caribou shot I got while in the park. Since I was on the wrong side of the bus, by the time I moved over, the caribou turned his back and started to run away. Had I been just a few seconds earlier I could have gotten a really good portrait of this magnificent animal. Darn! 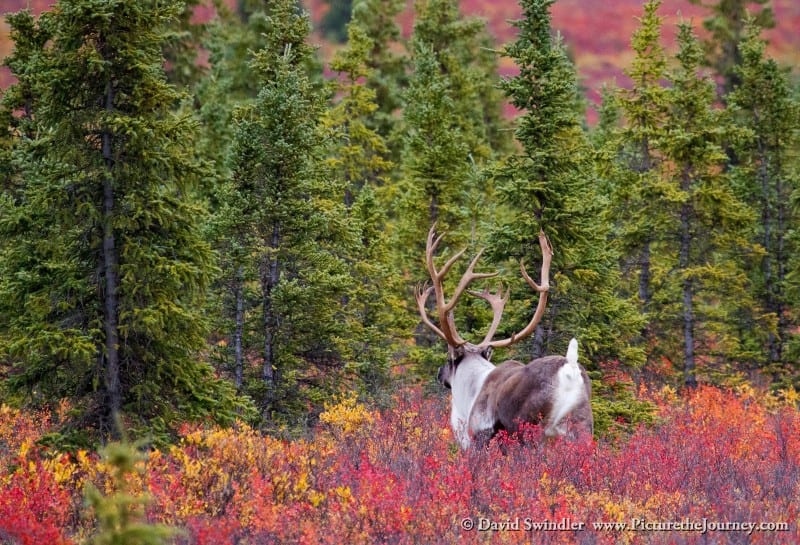 The Toklat River is another popular stopping point for the shuttle buses. Watch the ridges carefully between Polychrome and Toklat for Dall Sheep. We saw a few one day and asked the bus driver to drop us off. We hiked to the top of the steep ridge and found the sheep. The winds were really strong that day – we could stand at a 45-degree angle and the wind would hold us up! Unfortunately, when the wind started rustling our jackets, it spooked the sheep and they ran off. If it weren’t for that, the sheep didn’t really mind our presence. 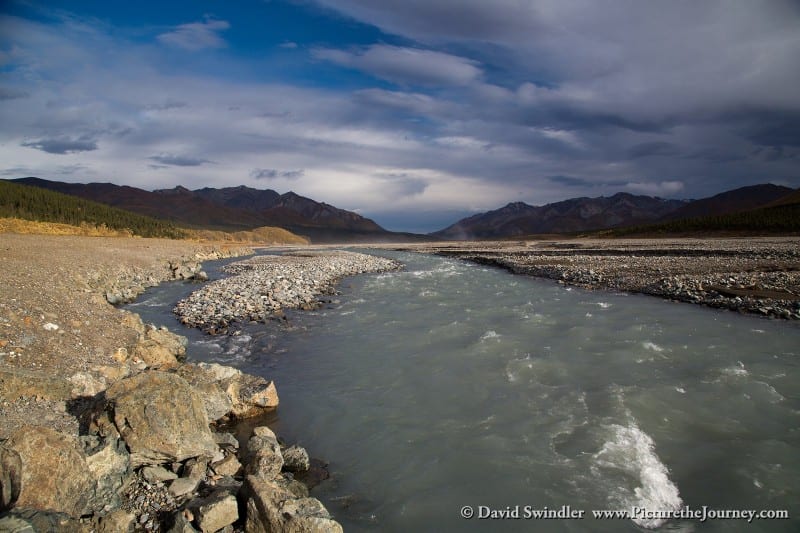 One of my favorite experiences in Denali was photographing a young grizzly bear early one morning. It had snowed the night before. This bear was digging for roots right off the side of the road. We were so close that we could hear his powerful claws ripping the plants right out of the soil. Occasionally he would stand straight up, look around, and then go right back on digging. I took the shot below at only 100mm which shows just how close we were. I really like the bears gaze as it seems to portend the coming of winter. 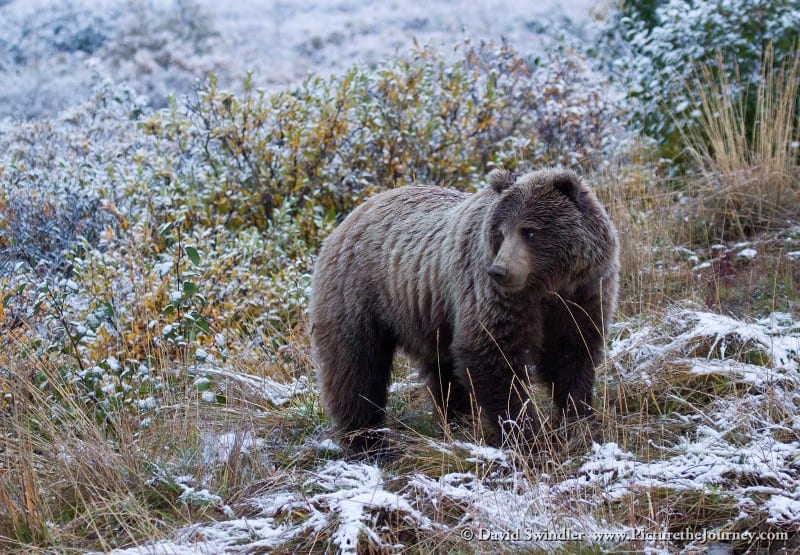 If you book a trip to Denali, I can practically guarantee you’ll see some great scenery and wildlife. This is Alaska at its finest. As one last piece of advice for photographers, I recommend traveling with two camera bodies. Put a landscape style lens on one and your telephoto on the other. Otherwise, you’ll be constantly switching between lenses and end up missing critical shots. Book your Denali Adventure now and have a great time. Happy exploring! 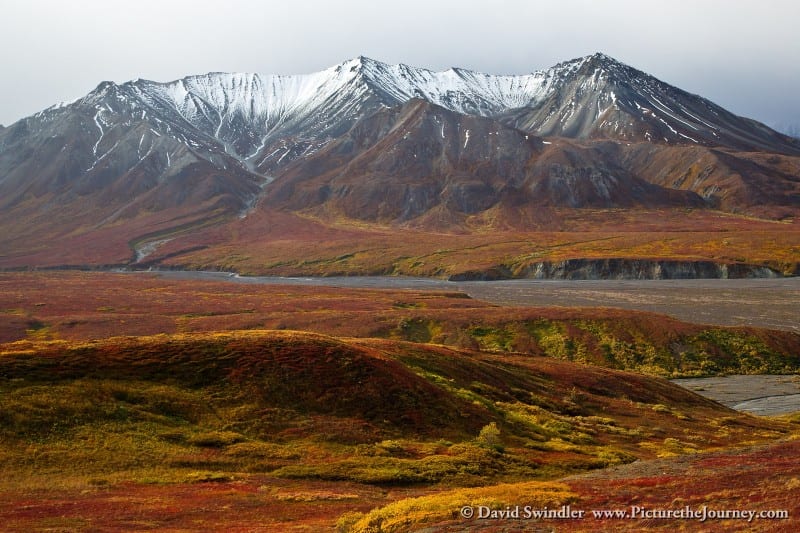