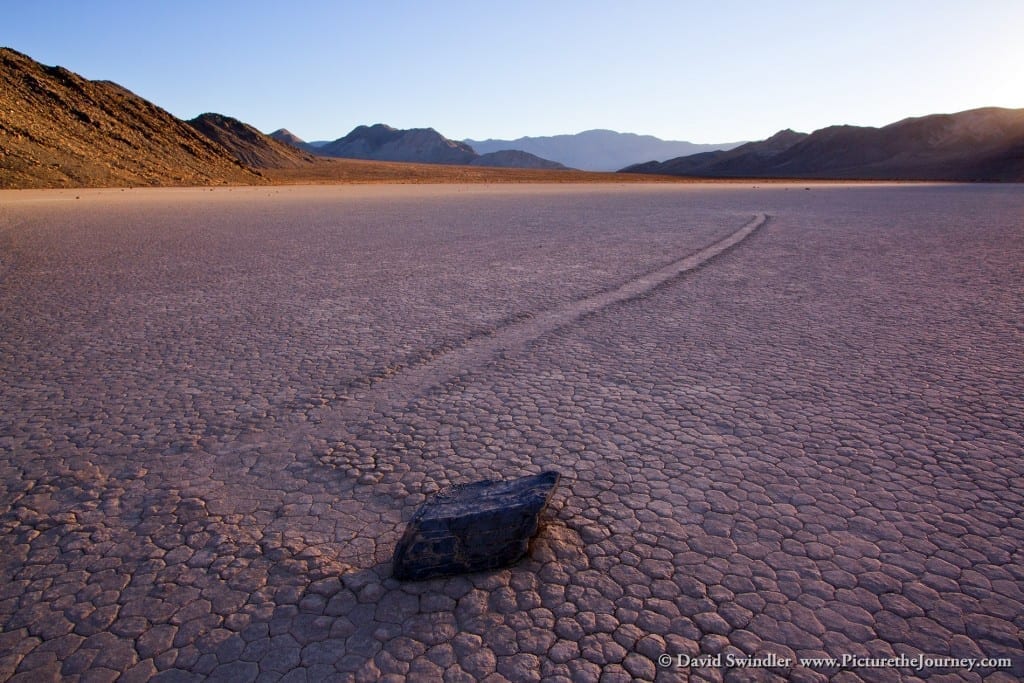 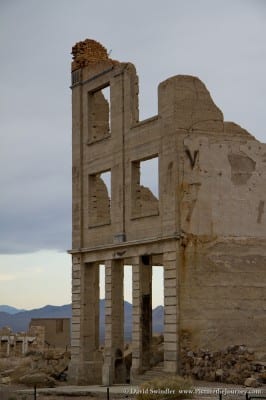 For Part 1 of the series, just click here. In this article, I’ll discuss places you can visit on the North End of Death Valley. Just across the Nevada border is a little ghost town called Rhyolite. The town was formed during the gold rush of 1905. After the richest ore was extracted, it declined quickly and was nearly abandoned by 1920. The picture on the left are the ruins from the Cook Bank Building.

From here, you have the option to drive the Titus Canyon Road back into Death Valley. A high clearance vehicle is recommended. This is a fascinating drive as you climb up over 5250 ft Red Pass. As you descend, you’ll pass through an old Ghost Town called Leadville. Then the canyon starts to narrow and gets more rugged. At one point there is a small spring called Klare Spring. Bighorn sheep depend on this for their water source and Native Americans used to hunt them here and left behind many petroglyphs. If you hang around long enough, you’ll likely be able to see them. The final 1.5 miles are the most narrow, pinching down to just 20 ft across. It’s quite the experience driving through this with the cliff walls towering above you (see photo on the right). 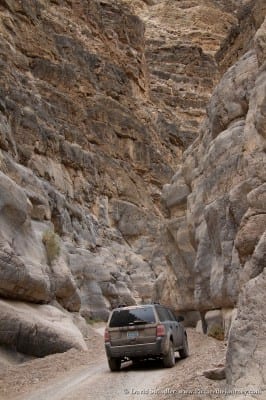 Next on the list is Ubehebe Crater, which was formed from a maar volcano. A maar volcano occurs when hot magma rises up and hits the ground water. The resulting steam causes a massive explosion and forms craters like this. Geologists speculate these craters could have been created as recently as 300 years ago. The crater is 600 feet deep and half a mile across. Most people only see it from the top but it’s totally worth climbing down to the bottom where I took the photo below. But getting down low to the ground, I was able to make the cracked earth a prominent foreground subject. 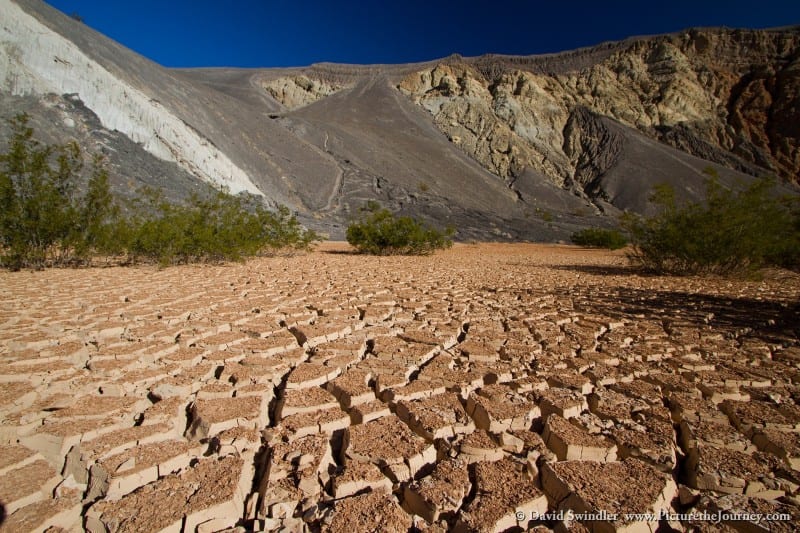 Now to my favorite part of Death Valley – the Racetrack! It’s a long, rough desert road to get out here. On the way, you’ll pass groves of Joshua Trees, barrel cacti, and the well-named Teakettle Junction. On the surface, the Racetrack is just a large, dry lakebed. However, it is home to a strange phenomenon. Although nobody has ever seen it happen, rocks will move across the flat surface and leave a noticeable trail behind them in the mud. Many theories have been posited in an attempt to explain the phenomenon. The most likely explanation is that a special combination of rain and wind allow the rocks to move. Rainfall around half an inch coupled with winds in excess of 50 mph helps provide a firm yet slippery surface over which rocks can become mobile. I was amazed at the size of the some of these rocks. Some of them were so big I couldn’t even push them myself. But when conditions are just right, the wind can propel them forward. The ground here is very hard and it’s difficult to image anything being able to make a definable track. To photograph the rocks, you’ll want to arrive early to scout out good spots that have well-defined tracks. Some of the rocks haven’t moved in years and have very faint trails. A key element in making photography more dynamic is to get down low. This rule applies as much to sports as it does to moving rocks! Late afternoon shadows can also provide more depth to the scene. The Racetrack is such a strange place and should not be missed during your Death Valley visit. 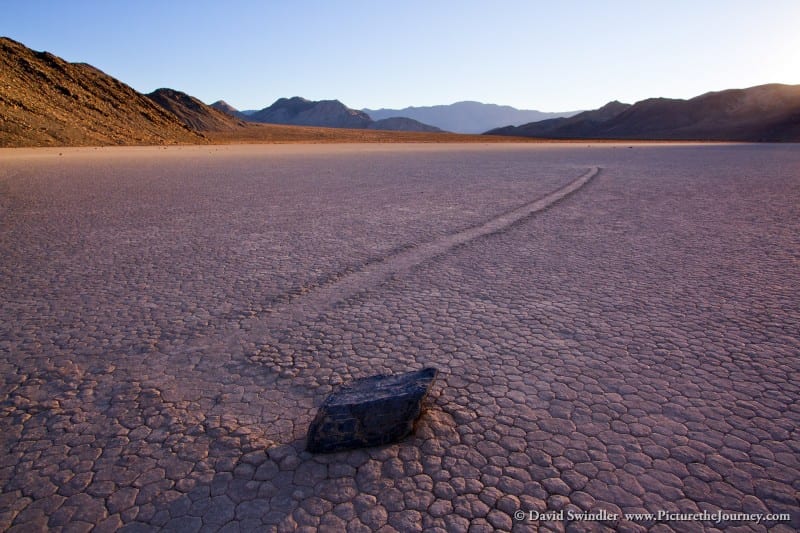 Scotty’s Castle is another spot that’s worth a visit. It’s located in the green oasis of Grapevine Canyon. The National Park Service conducts informative tours of the premises. The castle was built by Walter Scott who swindled investors out of their money by telling them he had gold mines in the area that were worth a fortune. It was basically just a big ponzi scheme and eventually the fraud was uncovered and the whole scheme collapsed. The vacation “castle” he built with other people’s money has very interesting interior decor and is lavishly furnished. Right as our tour was starting, the power went out and they unfortunately had to cancel it. I guess I need to get back there sometime to finish it! The photo below is from the stairwell inside one of the towers (one of the few places they let us go without having the power on). 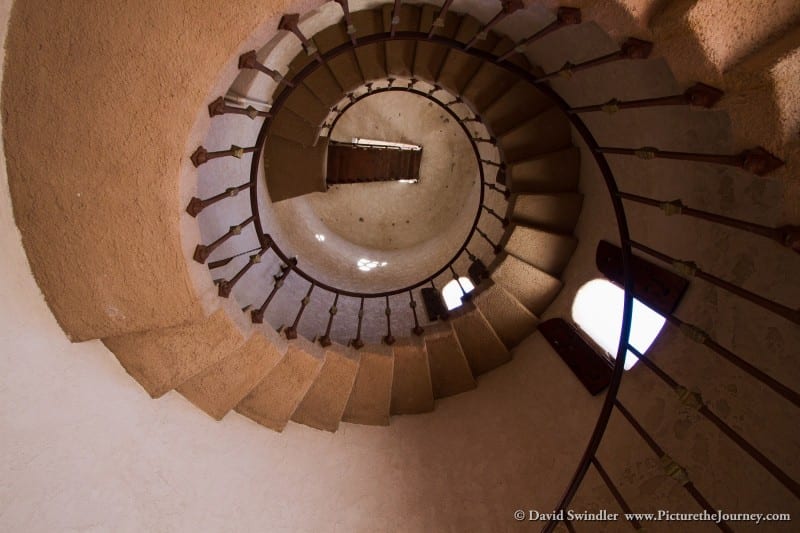 Eureka Dunes are some of the tallest dunes in North America. Unlike Mesquite Dunes covered in Part 1, you won’t find many visitors here due to it’s remoteness. It’s a stout hike up to the highest dune and there’s lots of places you can explore along the way. Perhaps the most unique aspect of these dunes is what is known as the “singing sand” effect. When you jump and land in the sand, it creates a low-frequency, guttural boom – almost like a low moan or hum. The sand here is loosely packed and very spherical. When a sheet of sand cascades down the face, friction between grains emits an audible acoustic wave. We had a great time jumping off dunes and laughing at the “moans” we’d hear upon landing. The photo on left is my buddy Dave at the highest part of the dunes. To get an idea of the scale, just look at how small the dunes are in the background. 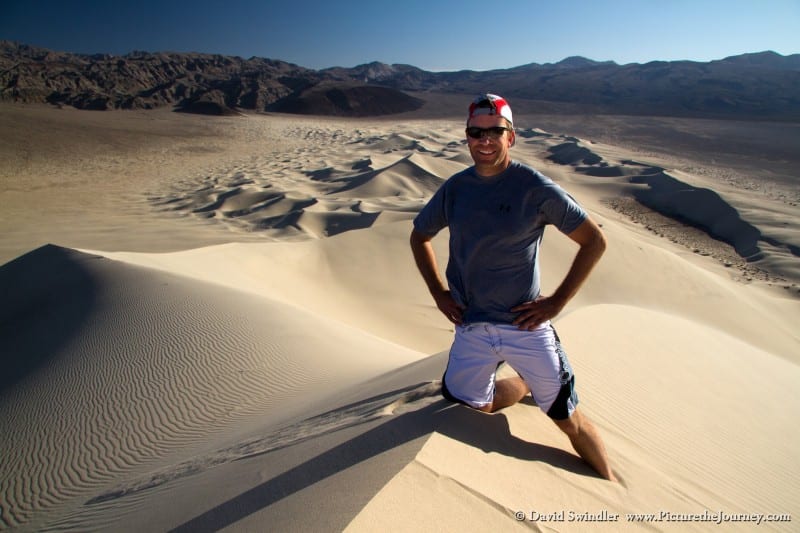 Well, this article is getting kind of long, so I’ll plan on covering the Alabama Hills in the next post. If you want to see more images from this trip, just click. I’ll leave you with one more image of erosion lines on the Racetrack. Due to the fractal nature of the pattern, it almost looks like a tree. Happy exploring! 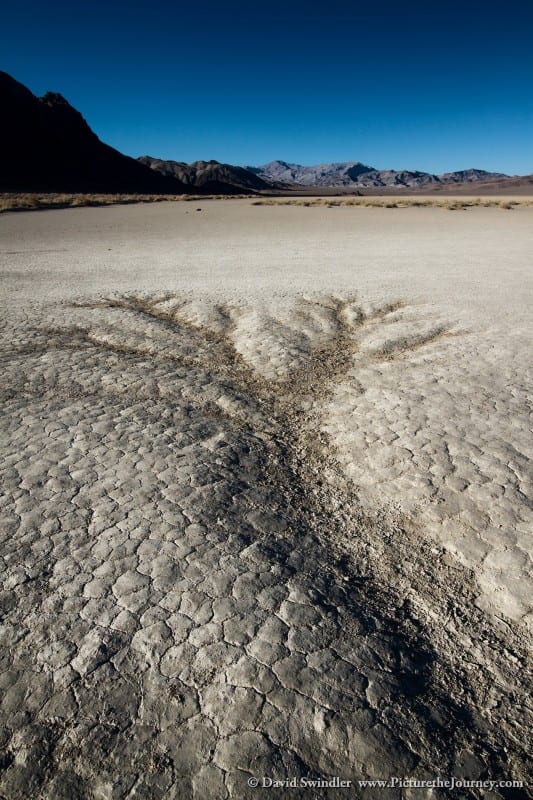