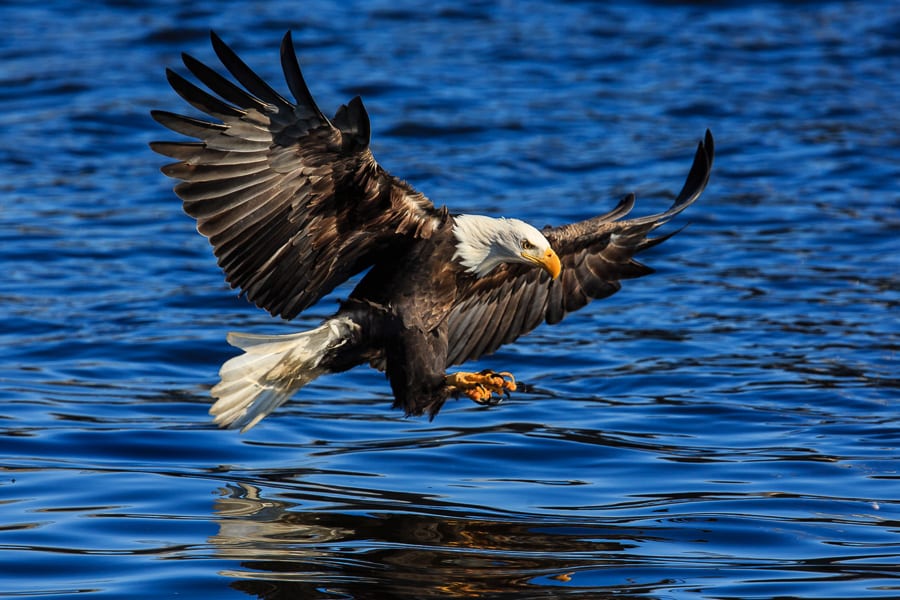 Each winter, hundreds of bald eagles congregate along the Mississippi River. Numbers often peak around mid-January. Of course, this all depends on how cold the temperatures are. When it’s warm, the eagles spread out all along the river corridor and are much harder to spot. As it gets colder, the river freezes except near the locks and dams. The largest groups of eagles will be found near the locks and dams. 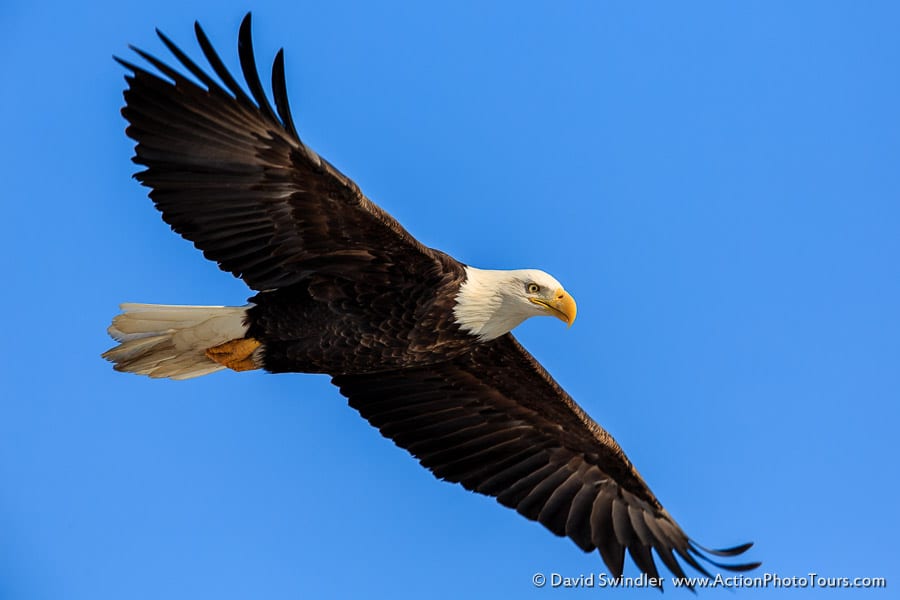 Although other locks and dams often support higher bald eagle counts, Lock & Dam 14 is my favorite since it allows much closer views to the eagles as they catch fish in the river. Lock & Dam 14 is located just south of I-80 near LeClaire, Iowa. There is a nice parking lot with restroom facilities and a viewing platform. The best light is in the afternoon, although I’ve still gotten some great images in the morning. I recommend getting there early to find a good spot on the platform as it gets crowded later in the day (especially on weekends). 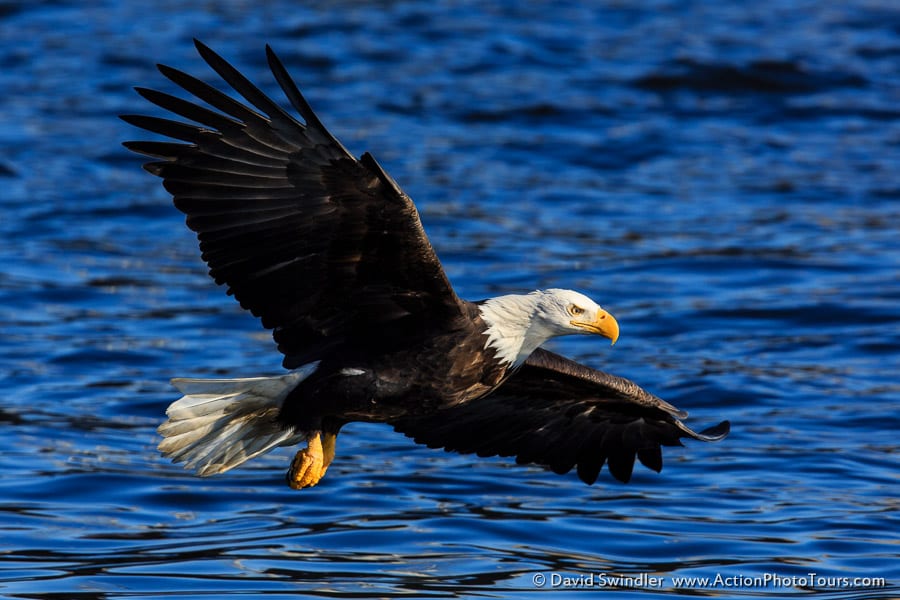 Of course the best part is watching the eagles as they swoop into the river to catch fish. This can require some patience though as the eagles will often sit still for a while and you’ll think nothing is going to happen. Then all of the sudden they start flying around, interacting with each other, and catching fish. You have to be ready on a moments notice to capture the action! 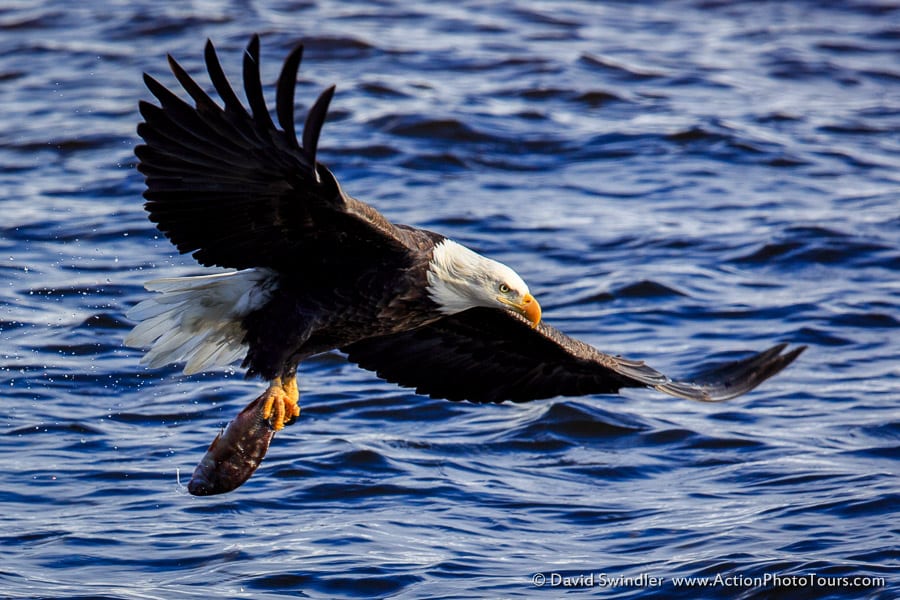 The eagles will typically fly in circle once or twice until they hone in on a fish. Once they have a fish in their sights, they’ll dive down and then pull up and hover right before they hit the water. This is the money moment! And it will take some practice learning to track the eagles’ flight patterns – especially with a longer lens. The great thing about Lock & Dam 14 is that you’ll get many opportunities to hone your skills and get some great shots at the same time. The 2 shots below show the diving and hover behavior. 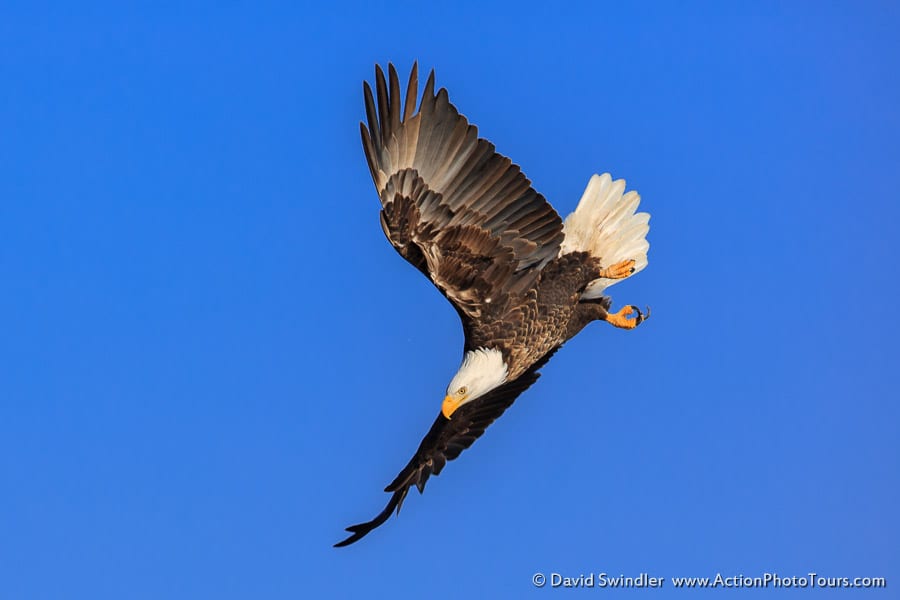 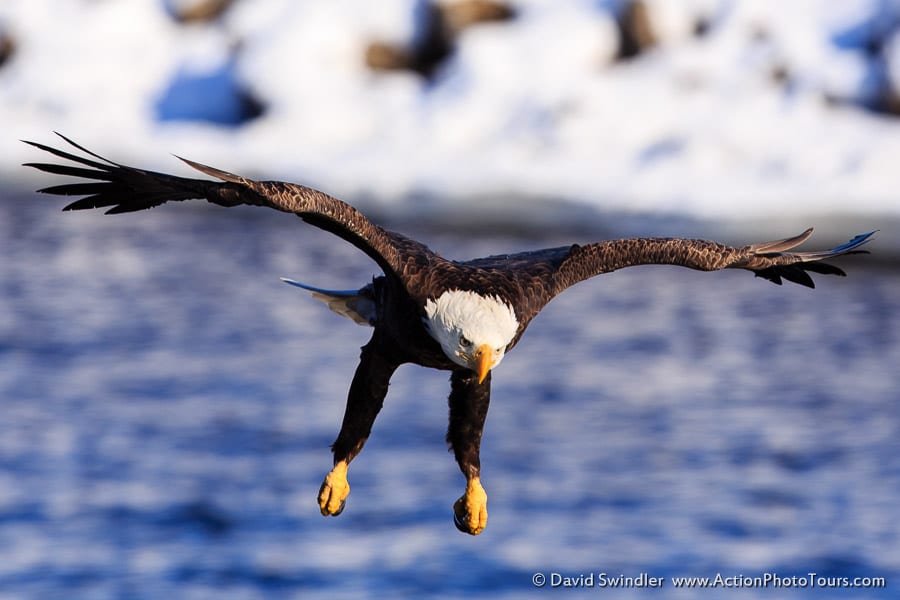 There are a lot of skills you’ll need to learn to take consistent bald eagle photos. I’ll give some photo tips later on in this article. However, the best way to learn bald eagle photography is to sign-up for one of my workshops. The Haines Alaska Bald Eagle Workshop is available in Nov 2015: Haines Bald Eagles Trip 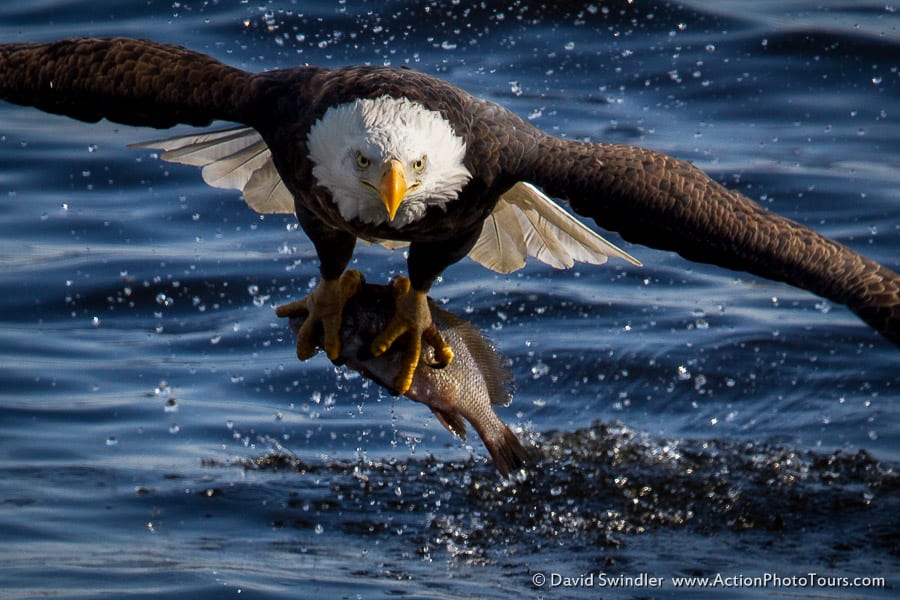 The Department of Natural Resources allows people to throw fish into the river for the eagles as long as the fish were caught from the river. Occasionally, other photographers will arrive with a bucket of frozen fish to throw to the eagles. On some days, the eagles are very interested in the fish that are thrown in. I saw one guy that built a large slingshot to throw fish out really far. This worked really well and the eagles would consistently swoop in and catch the fish. However, if the wind is blowing from the east, any fish that are thrown in just come back towards the viewing platform and are ignored by the eagles. But there are plenty of smaller fish that the eagles will catch on their own. 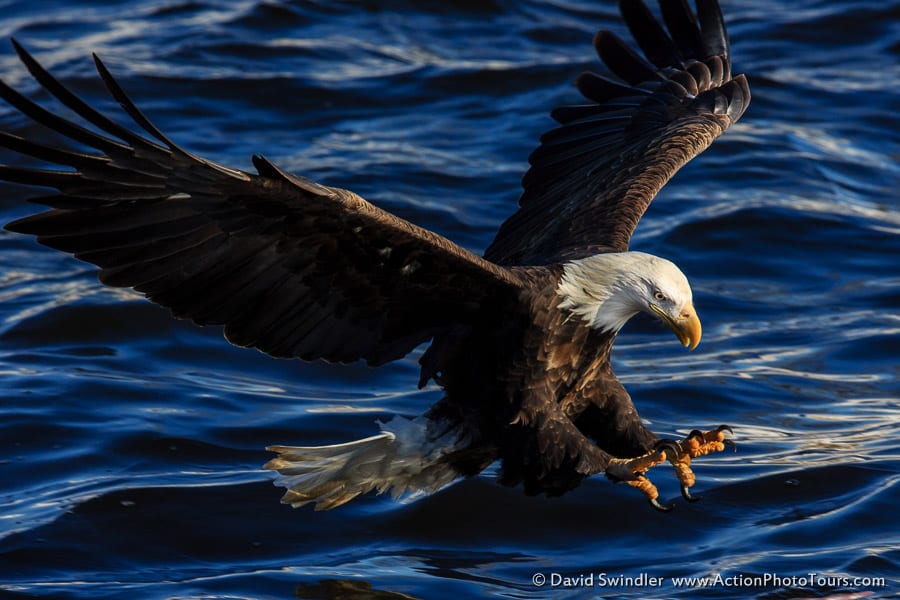 The shot below shows my camera setup. The background trees are where the eagles sit and look for fish. They will then swoop down and snag fish in the water below. It would be hard to find a spot where you could be any closer to the action! I have heard rumors that these trees will get cut down sometime in 2015 since they are dead and pose a liability concern. 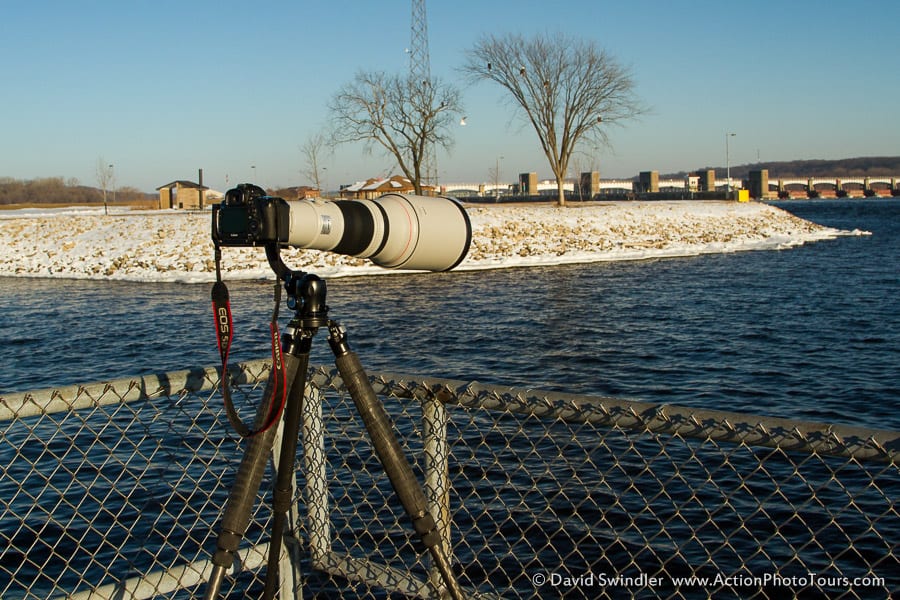 Make sure you dress warmly since you’ll be standing out in freezing temperatures for quite a while. Be prepared as well for windy conditions. For equipment, I recommend a long lens 500-600mm on one camera body and a second camera body with a shorter zoom lens (i.e. 100-400mm). For the long lens, you’ll want a tripod with some sort of gimbal head. There will be many times when the eagles will come too close for the long lens. The shorter lens will also help with catching overhead shots. 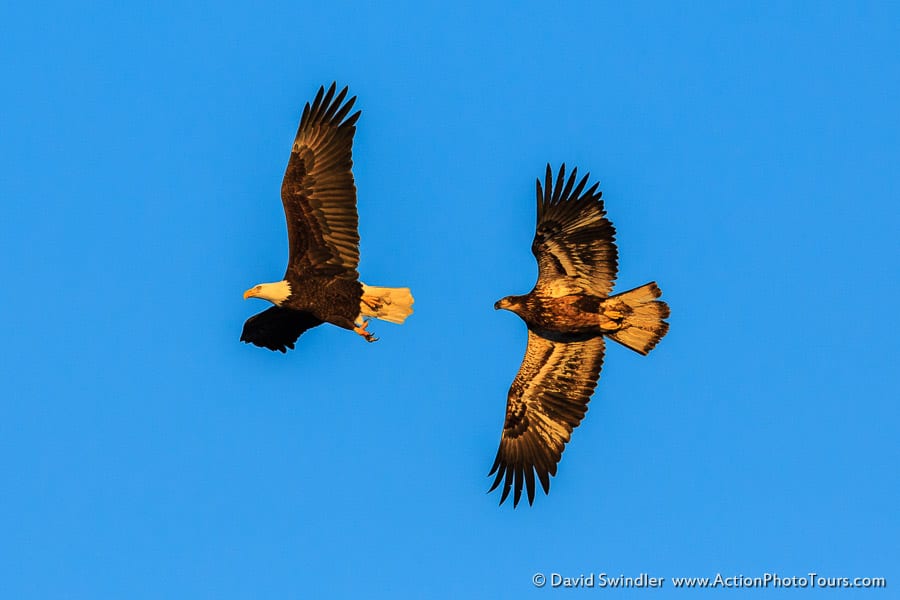 In most cases, I recommend shooting in manual mode. Dial-in the exposure so that you don’t blow out the white head feathers. Manual mode helps a lot when tracking eagles through areas of different background tonality (especially on sunny days). On overcast days, make sure you “Expose to the Right” as much as you can and shoot in raw to help recover shadow detail. 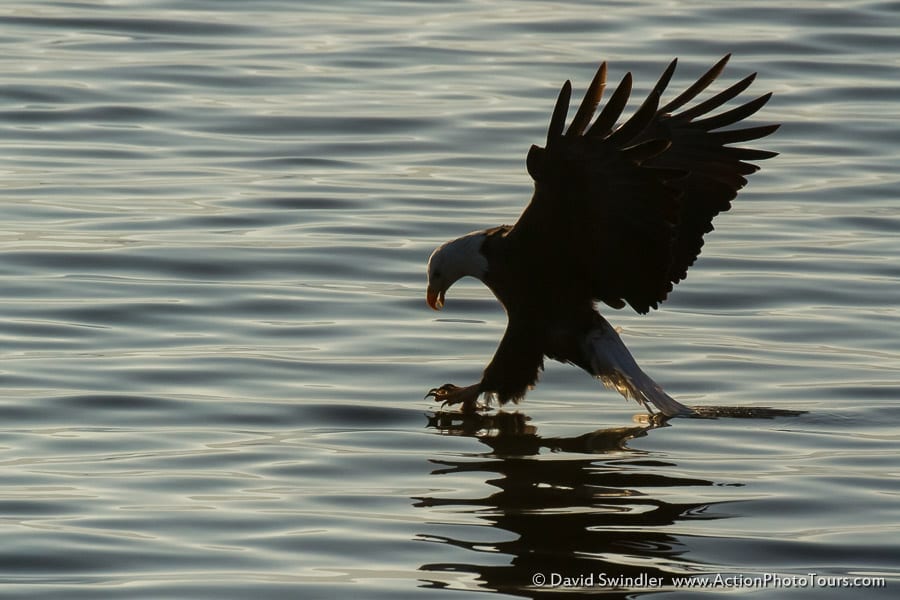 One of the biggest things you can do to improve bald eagle photography is to start using Back-Button Focus instead of focusing with the shutter button. There are lots of tutorials you can read online about that. Make sure you are using Servo (Canon) or Continuous (Nikon) focus modes. Also, don’t be afraid to experiment with your camera’s AF settings. For example, I found that turning the Accel/Deaccel to +1 and Tracking Sensitivity to -1 really helped improve the number of sharp bald eagle shots I got. Having a camera with a fast burst rate certainly helps. However, I did just fine with only 6 fps. 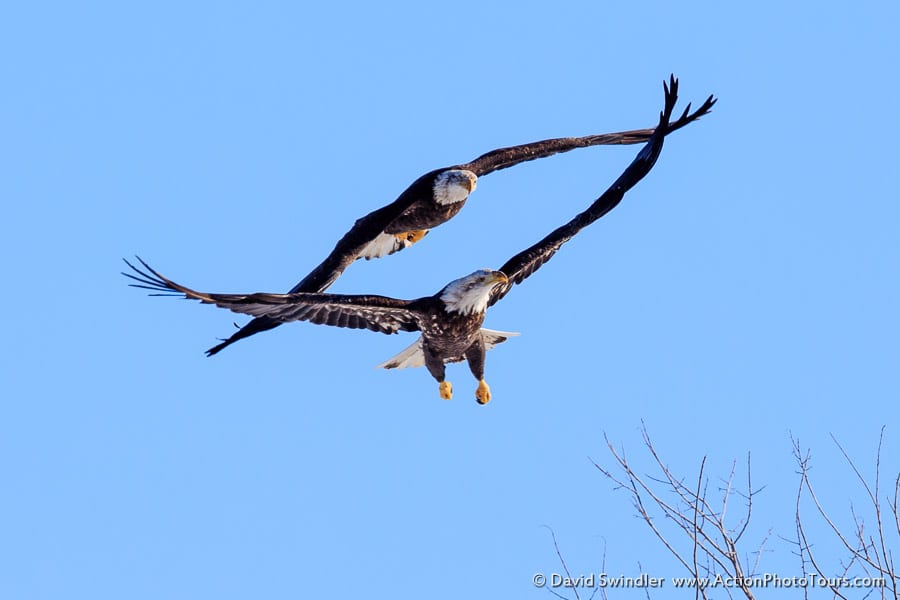 Occasionally other critters will show up to eat fish as well. I was surprised to see this lone pelican. He happily helped himself to the fish that people threw in that the eagles were ignoring. 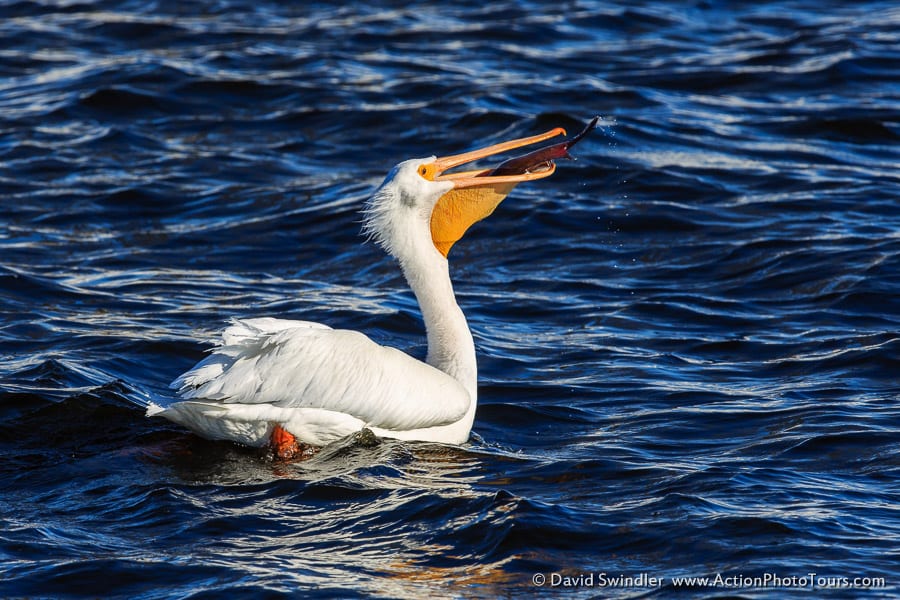 If the eagles aren’t active at sunrise or sunset, then I look for bridges to shoot. There are plenty to choose from around here! 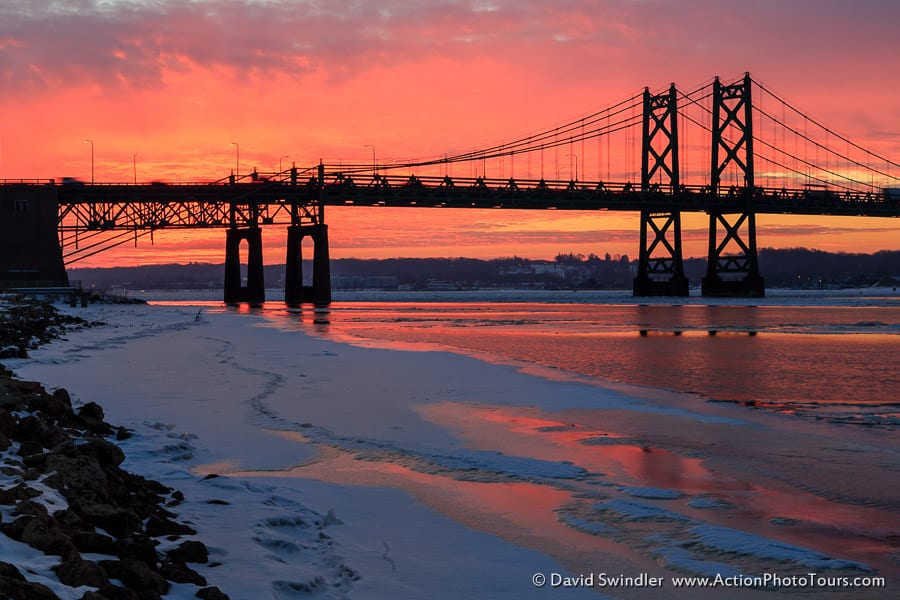 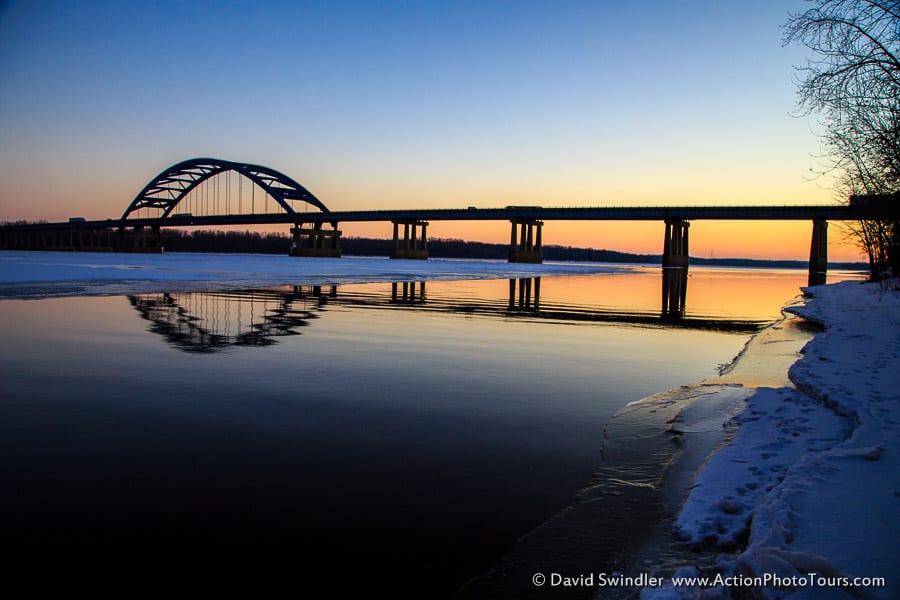 Using a very fast shutter speed is vital to getting sharp shots. For the eagles, aim to be at 1/1000s or faster. Depth of field is also a challenge with such a large wingspan. I rarely ever shoot eagles wide-open. Instead, I usually stop down to f8. 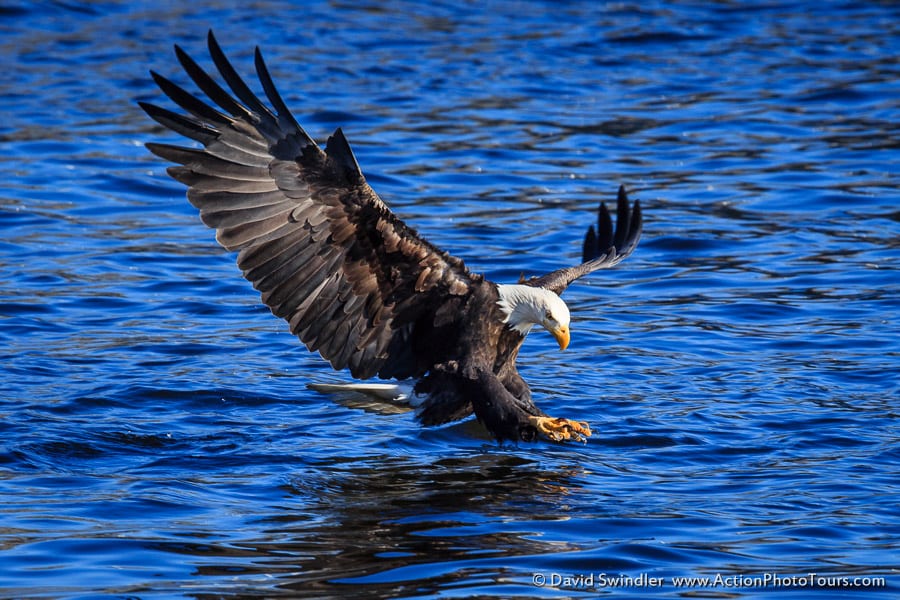 Lock & Dam 14 is a great spot to capture fishing action. However, if you really want to see bald eagles fighting and interacting with each other, I highly recommend checking out my Haines Alaska Bald Eagle Tour. The scenery there in Alaska is absolutely amazing and of course you’ll see plenty of wildlife! Haines Bald Eagles Trip 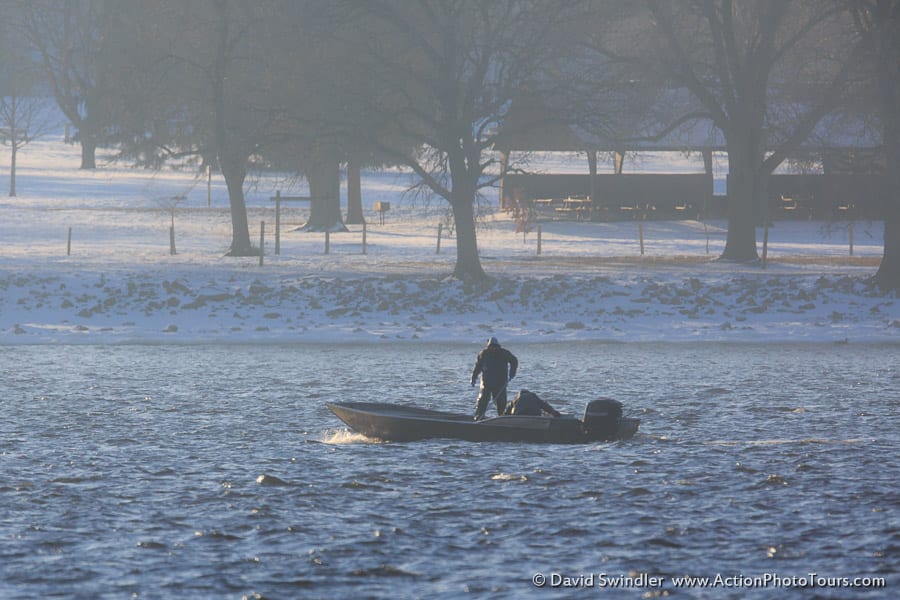 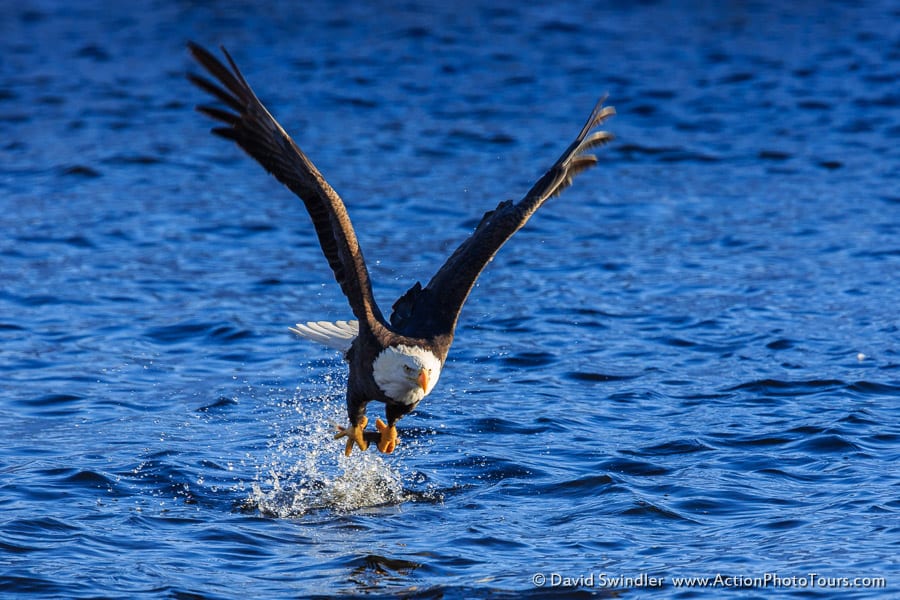 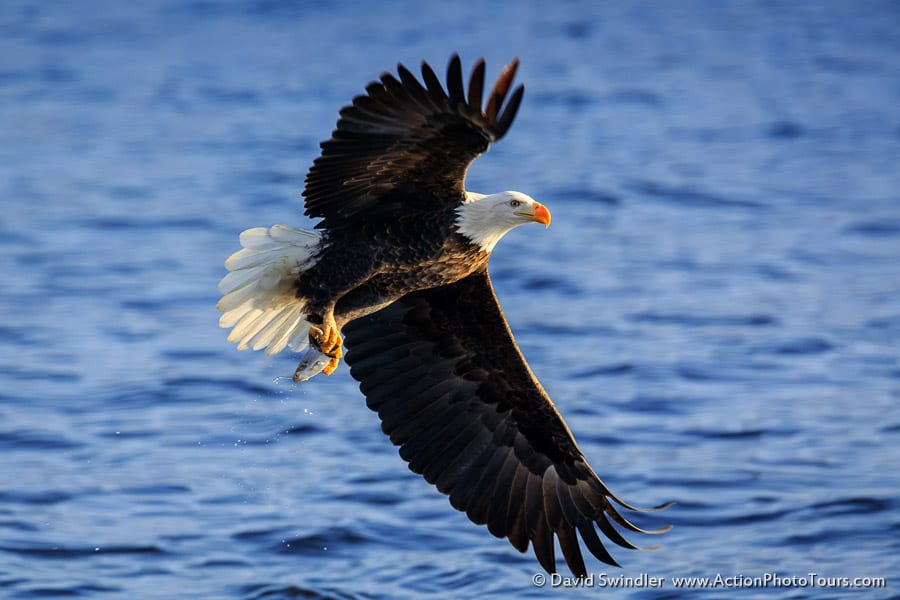 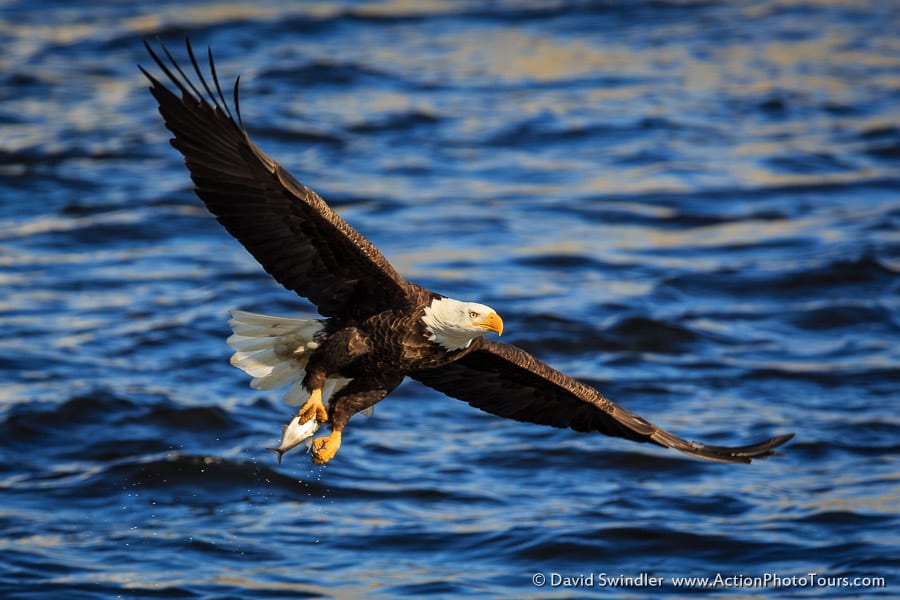 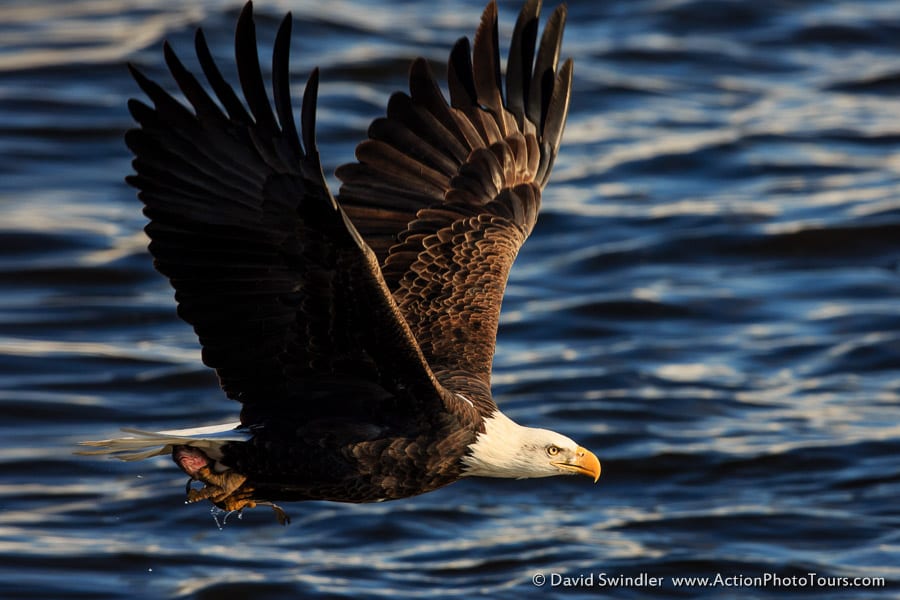 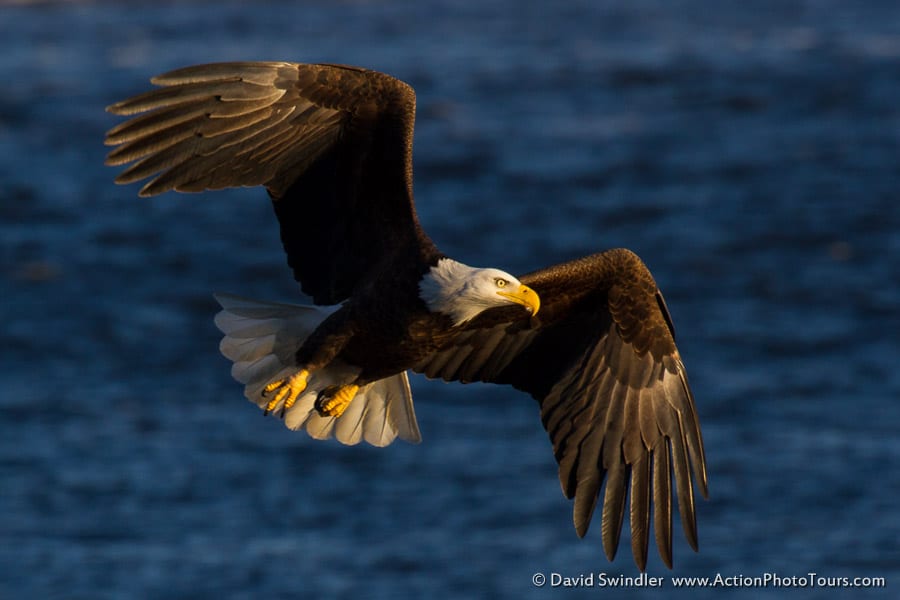 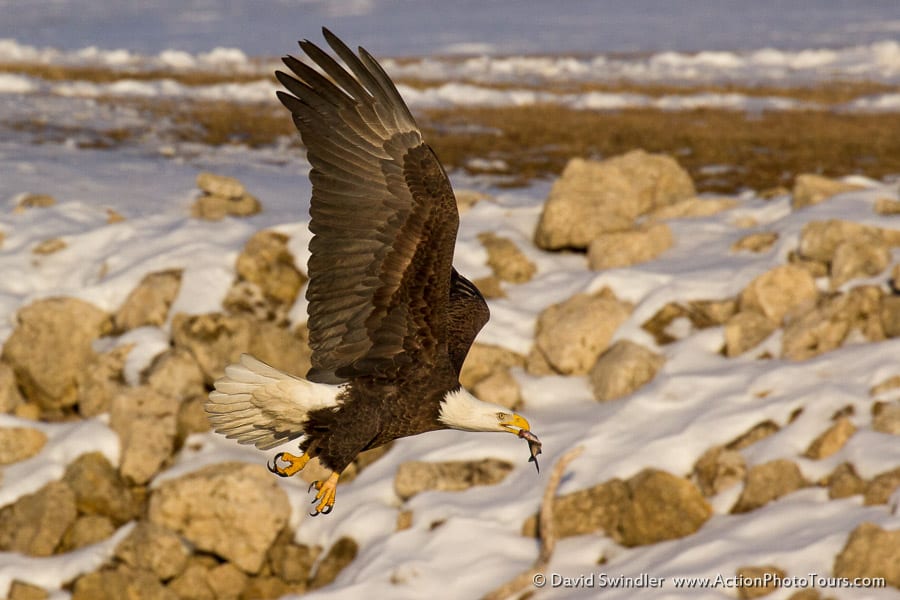 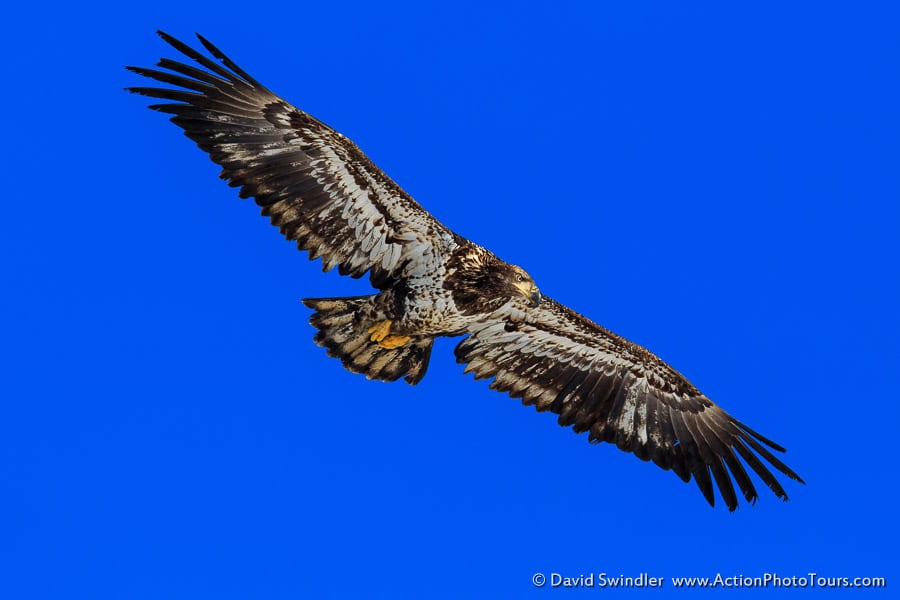