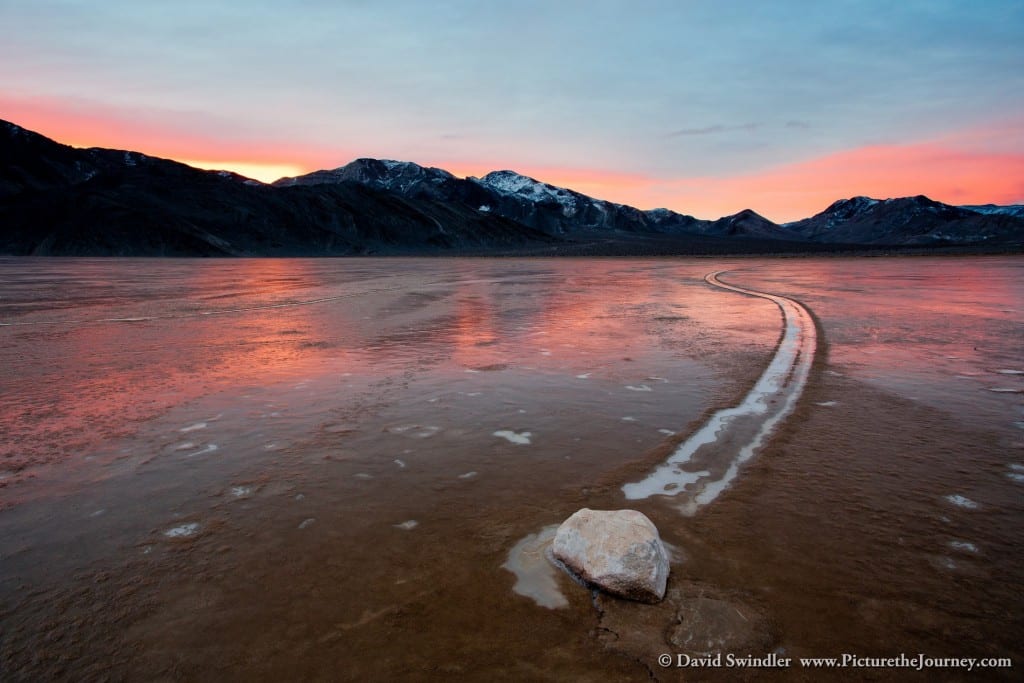 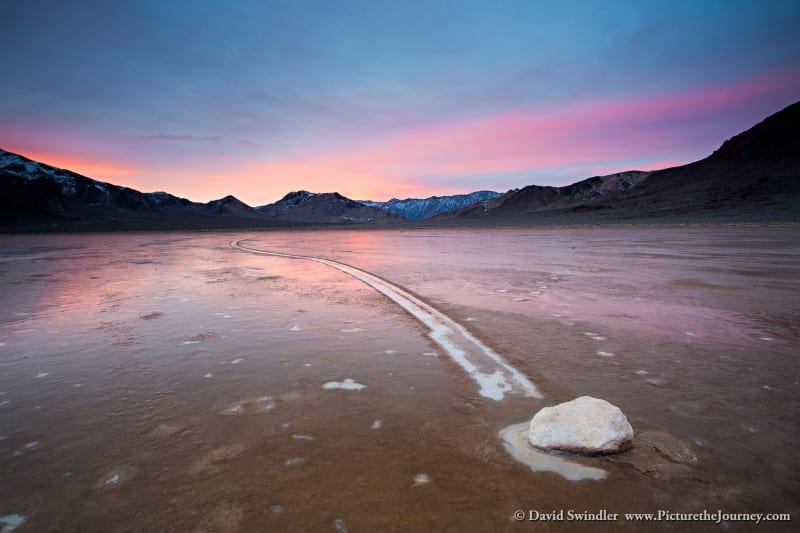 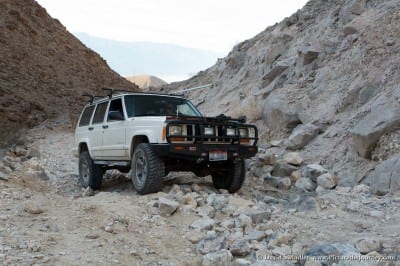 Last week, my friend Jeremy went out on a quick photo trip. Since he had never been to Death Valley, we decided to venture out the Racetrack. With only one day to spend there, we weren’t sure what to expect and we had no idea what the current conditions were like. For those of you unfamiliar with the Racetrack, check out my previous blog post. We entered the Racetrack the back way, heading South down Saline Valley Road and then venturing East along Lippencott Mine Road. Saline Valley was pretty fast going until the final 10 miles where it got a little rocky.  However, Lippencott Mine Road was a pretty serious undertaking. It was very rough and narrow, often traversing the edges of steep cliffs.  There were a couple times where our jeep was just narrow enough to negotiate around cliff wash-outs. A large truck wouldn’t be able to make it! It was a good thing Jeremy had put a lift on his jeep, otherwise, we would not have had enough clearance for the roughest spots.

When we got to the summit, we could see that the Racetrack was partially flooded, a phenomenon I hadn’t ever seen before. I was excited to see how different it would look compared to the dry conditions I experienced a couple years ago. The southern end of the Racetrack was either extremely muddy or covered with a thin layer of water. Thus, we were initially disappointed we couldn’t walk out and photograph the sliding rocks, especially since there had been some recent tracks in the mud! Instead, we ventured around towards the other side and photographed a few rocks from the shore. I like the image below with parallel S-movements in the rocks. 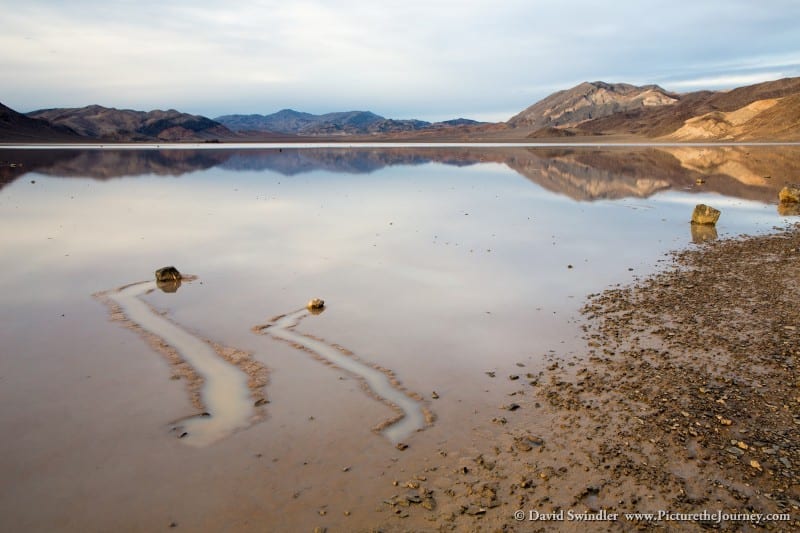 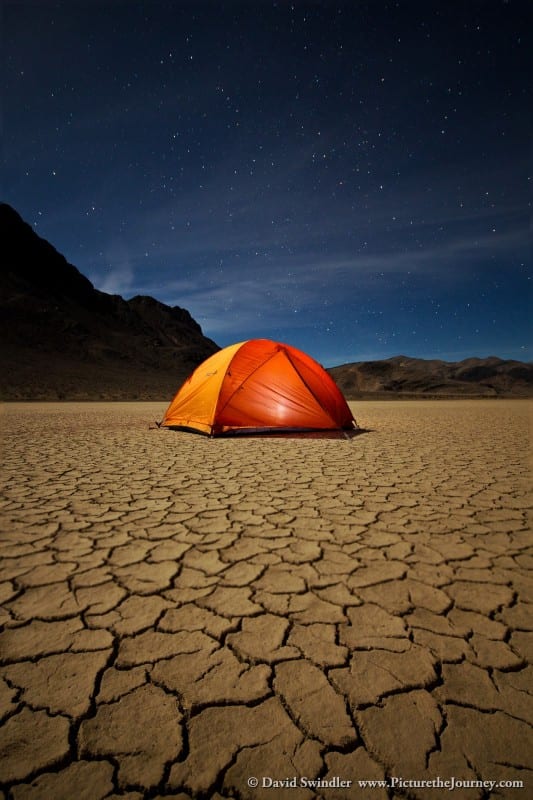 That night we camped on the Northern End of the Racetrack near the Grandstand (a large rock formation in the middle of the playa). We found a recently dried spot with nice looking cracked earth. For the shot on the left, a half-moon provided the foreground side lighting. If the moon was much fuller, it would have been difficult to capture any stars. We played around with various lights for the inside of the tent, none of which worked very well. They were either too harsh or didn’t provide even lighting. Finally, I got out my remote flash and found it worked great when aimed towards the back wall of the tent. The other nice thing about remote flash was that we could easily control the amount of light it put out. I set the ISO to 800 and took a 25-sec exposure with the camera low to the ground to accentuate the cracked earth. We were pretty happy with how the shot came out.

Since we were having so much fun, we tried some portrait photos. We found that we could do a long exposure to capture the stars coupled with a remote flash to freeze action. In the shot below, the flash caught me at the apex of the jump and then I quickly ran out of the frame while the exposure finished. If you look closely, you can see some of the background appearing through me, giving it a ghost-like appearance. I also liked how the remote flash would cast a large shadow behind me. It was a lot of fun experimenting with new kinds of poses and jumps! 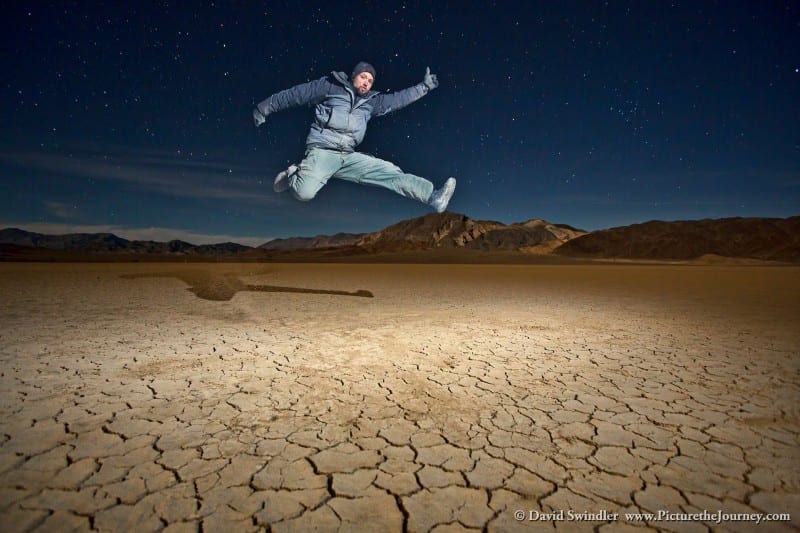 Before I went to bed that night, I told Jeremy that there was a slim chance it could get cold enough by morning to freeze the water on the Racetrack. When we awoke in the morning, there was frost on the tent, so we hurriedly drove down to the flooded end of the Racetrack. To our delight, it was a solid sheet of ice! We grabbed our tripods and went slipping and sliding on the ice to find some rocks to photograph. To make things even better, we had a beautiful sunrise that morning. The sky was filled with clouds that lit up and reflected brilliant colors on the ice. In addition, the tracks behind the rocks were easily visible with the white ice that filled the cracks.

The light changed quickly that morning and we had to move swiftly from rock to rock to capitalize on the peak light. In the image below, I found it interesting how the it looks like the rock slid and then jumped a little before coming to a complete stop. 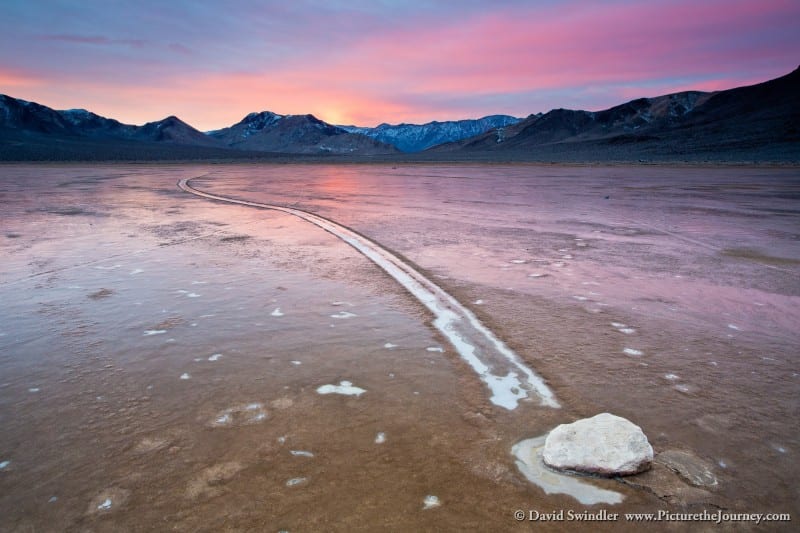 In this image, it look like the rocks are indeed racing and it’s a dead heat. Who do you think will win the race? 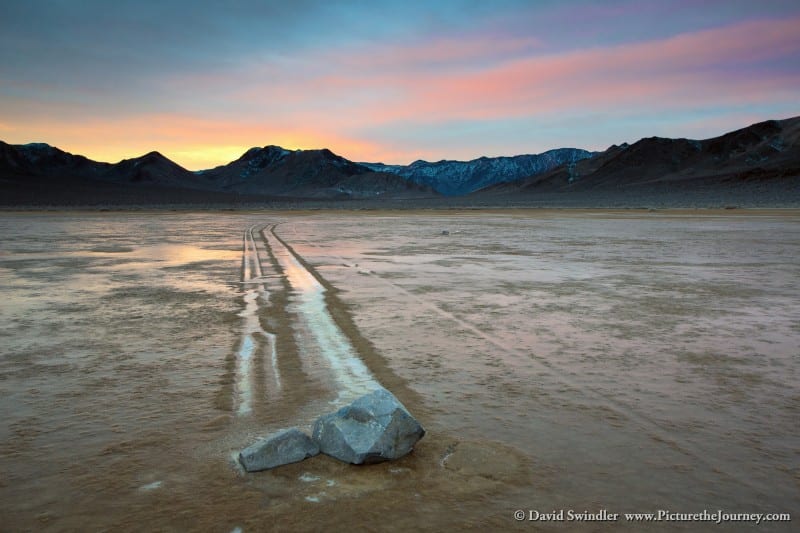 Soon the color faded and ethereal warm light began to bathe the distant Ubehebe Peak transforming it into a glowing beacon. It was absolutely beautiful! The effect was short-lived as the clouds began to choke off the sun and the light turned flat. However, Jeremy and I were ecstatic with the awesome images we were able to capture during those few minutes that morning. We had thought the Racetrack was a complete bust the night before, but it surprised us and was much better than we could have ever hoped for. Talk about being in the right place at the right time! Happy exploring! 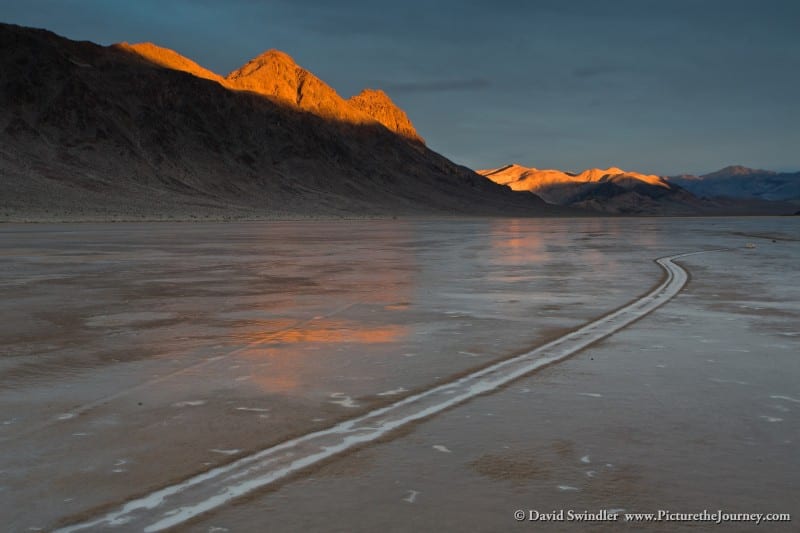 Ice on the Racetrack